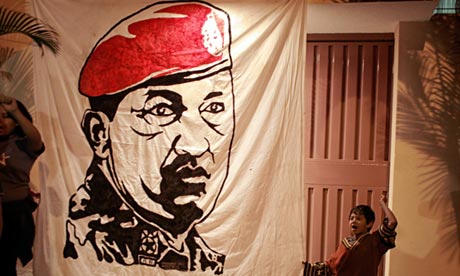 President Chavez, who led Venezuela for 14 years, died Tuesday at the age of 58 after a two-year-long fight against cancer.

Nicolas Maduro, who had been vice president under Chavez and was sworn in as acting president Friday, earlier accused Venezuela’s enemies of causing cancer in Chavez, saying the issue would be investigated by a special commission.

According to a major Venezuelan newspaper, Morales, who traveled to Caracas to attend Chavez’s state funeral Friday, said he had always been aware of Chavez’s disease although he never revealed any details.

The newspaper, El Universal, reported that Morales recalled he had once offered Chavez some coffee, but the Venezuelan leader’s security guards objected.

“Brother Chavez said [to his body guards]: ‘How can you think that Evo will poison me?’ and then he had coffee,” the Bolivian leader said.

The swearing-in ceremony for Maduro was held hours after Chavez’s state funeral on Friday, which was attended by over 30 heads of state and government.

Venezuela will hold a presidential election to elect a successor to Chavez on April 14, the country’s electoral council said following an extraordinary meeting.SOURCE