Looking Backward: 2000-1887 is a utopian novel by Edward Bellamy, a lawyer and writer from western Massachusetts; it was first published in 1888. According to Erich Fromm, Looking Backward is “one of the most remarkable books ever published in America”. 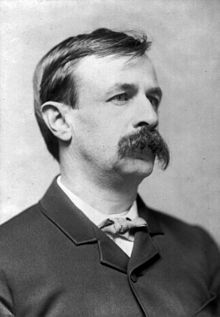 It was the third-largest bestseller of its time, after Uncle Tom’s Cabin and Ben-Hur: A Tale of the Christ. It influenced a large number of intellectuals, and appears by title in many of the major Marxist writings of the day. “It is one of the few books ever published that created almost immediately on its appearance a political mass movement”. In the US alone, over 162 “Bellamy Clubs” sprang up to discuss and propagate the book’s ideas. This political movement came to be known as Nationalism, not to be confused with the political concept of nationalism. The novel also inspired several utopian communities.

The book tells the story of Julian West, a young American who, towards the end of the 19th century, falls into a deep, hypnosis-induced sleep and wakes up one hundred and thirteen years later. He finds himself in the same location (Boston, Massachusetts), but in a totally changed world: It is the year 2000 and, while he was sleeping, the U.S. has been transformed into a socialist utopia. The remainder of the book outlines Bellamy’s thoughts about improving the future. The major themes are the dangers of the stock market, the use of credit cards, the benefits of a socialist legal system, music, and the use of an “industrial army” to make tasks run smoother.

The young man readily finds a guide, Doctor Leete, who shows him around and explains all the advances of this new age; including drastically reduced working hours for people performing menial jobs and almost instantaneous, internet-like delivery of goods. Everyone retires with full benefits at age 45, and may eat in any of the public kitchens. The productive capacity of America is nationally owned, and the goods of society are equally distributed to its citizens. A considerable portion of the book is dialogue between Leete and West wherein West expresses his confusion about how the future society works and Leete explains the answers using various methods, such as metaphors or direct comparisons with 19th-century society.

Although Bellamy’s novel did not discuss technology or the economy in detail, commentators frequently compare Looking Backward with actual economic and technological developments. For example, Julian West is taken to a store which (with its descriptions of cutting out the middleman to cut down on waste in a similar way to the consumers’ cooperatives of his own day based on the Rochdale Principles of 1844) somewhat resembles a modern warehouse club like BJ’s, Costco, or Sam’s Club. He additionally introduces the concept of credit cards in chapters 9, 10, 11, 13, 25, and 26. All citizens receive an equal amount of “credit.” Those with more difficult, specialized, dangerous or unpleasant jobs work fewer hours. Bellamy also predicts both sermons and music being available in the home through cable “telephone”.Bellamy labeled the philosophy behind the vision “nationalism” ,and his work inspired the formation of more than 160 Nationalist Clubs to prognate his ideas

Interestingly, despite his Christian Socialism (though he was loath to use the term “socialism”), Bellamy’s ideas somewhat reflect classical Marxism. In Chapter 19, for example, he has the new legal system explained. Most civil suits have ended in socialism, while crime has become a medical issue. The idea of atavism, then current, is extolled to explain crimes not related to inequality (which Bellamy thinks will vanish with socialism). Remaining criminals are medically treated. Although dissent and discontent is naturally absent in his utopian work, this may be similar to psychiatric treatment as punishment for dissidents in the Soviet Union, where they were diagnosed with sluggishly progressing schizophrenia. If the accused does not plead guilty a trial is held after which if convicted the sentence doubles, exactly like the legal system of many real-life socialist states.[dubious – discuss] Obviously, this system has a tendency to convict the innocent, but Bellamy’s predictions were still startlingly accurate. One professional judge presides, appointing two colleagues to state the prosecution and defense cases. If all do not agree on the verdict, then it must be tried over. Chapter 15 and 16 have an explanation of how free, independent public art and news outlets could be provided in a more libertarian socialist system. In one case Bellamy even writes “the nation is the sole employer and capitalist”.