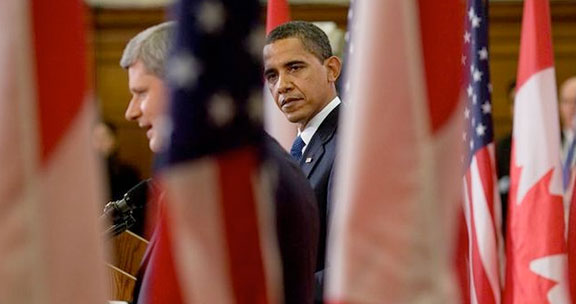 Unifying the once sovereign nations of North America under treaty law continues to move forward by stealth. And many Canadians are sitting uneasy about the secrecy.

Members of Canada’s CTV express concern in the following clip about a draft agreement for ‘integrated perimeter security’ between the U.S. & Canada that Canadian officials have refused to release. As one of CTV’s panel members points out, it seems the Canadian government has “put the cart before the horse,” intent on ‘first signing the deal, then discussing it.’ Another panelist quips he has a copy of the agreement that “doesn’t exist,” refusing to show it to viewers because officials were keeping it under wraps.

While some of the CTV panelists were not against the agreement, it was termed a ‘mini-NAFTA’ that could undermine sovereignty through its integration scheme. “Perimeter agreement could mean goodbye to the 49th parallel,” as one journalist put it, emphasizing that the plan utilized the word “integrate.”

According to The Globe and Mail, “The federal government wants members of the public to impart their “shared vision” for the security of the Canada-U.S. perimeter – it just doesn’t want to explain what that means.”

CTV interviewed Canada’s foreign minister Lawrence Cannon in recent weeks, who was reluctant to “speculate” on the non-yet-public North American perimeter security deal. Cannon instead told viewers to “breath easily” until such an agreement is signed, urging viewers to ‘keep worrying about the economy’ instead.

Whatever the official reasons for secrecy, the strategy is in keeping with leaked documents obtained in the U.S. from a Judicial Watch FOIA lawsuit, that reveals plans to achieve North American integration “by stealth.” The concept for the North American “perimeter security” comes directly from plans formulated at the 2005 Security and Prosperity Partnership Summit and written about in Council on Foreign Relations documents:

The Task Force offers a detailed and ambitious set of proposals that build on the recommendations adopted by the three governments at the Texas summit of March 2005. The Task Force’s central recommendation is establishment by 2010 of a North American economic and security community, the boundaries of which would be defined by a common external tariff and an outer security perimeter.

The Canadian equivalent of FOIA has refused altogether to release documents about the agreement:

In a letter written March 4, Public Safety officials said: “The records pertaining to your request have been entirely withheld.” The department said the information could be injurious to international affairs, that it contained information developed for a government institution or minister, that it would provide an account of a government consultation, and that it is a matter of cabinet confidence.

This secrecy makes sense from the perspective that the CFR warned in Dec. 2010 that a 2011 push for U.S.-Canadian perimeter security would pose challenges: “While the initiative as outlined makes tremendous sense on both sides of the border, it will face significant opposition in Canada from those who fear that national sovereignty will be sacrificed on the altar of continental security.”

As Global Research points out on March 31, the Canadian government has since launched a website for public feedback after their secret negotiations became a hot topic:

“Since the Beyond the Border declaration was announced, the Canadian government has taken some heat for the bilateral talks being held in secret. In an attempt to try and curb some of the criticism, they launched a new website where the public can share their ideas on the planned security perimeter.”

While a general idea of the border security plan is being discussed, it would be hard for Canadians to weigh in with a fully informed opinion when the particulars of the agreement are being withheld. This point has been made by the Council of Canadians and other critics of the plan:

In a recent Action Alert, the Council of Canadians acknowledged, “no one can know for sure what ‘perimeter security’ means until the details, which are being developed behind closed doors, are announced in June. And we are being asked to suggest only improvements (not criticisms) of a plan we haven’t seen.

Moreover, joint action on the border with the United States may not be advisable (aside from secrecy and sovereignty issues), since it has all but admitted it refuses to enforce its own policies on the border. Today FOX News reports that border patrol had been told not to make arrests of illegal immigrants crossing the border:

US Border Patrol officials were ordered to reduce — and at times even stop — arrests of illegal immigrants caught trying to cross the US border, an Arizona sheriff claimed in a report published Friday by FOXNews.com

Whatever the merits of a border perimeter might be (i.e. increased “security” and “prosperity” under a one-world government of, by and for the corporations), there are no plans to release the details until June.

Reservations for a doomsday bunker in the U.S. have rocketed since Japan's catastrophic earthquake, tsunami and nuclear meltdown. The 137,000sq...