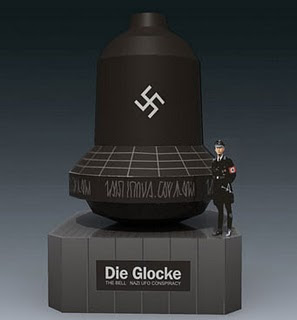 Die Glocke (German for “The Bell”) was a top secret Nazi scientific technological device, secret weapon, or Wunderwaffe. The Nazi-Bell device consisted two of counter-rotating cylindrical containers. The containers, which were positioned one above the other measured approximately 1-meter in diameter, and were filled with cryogenically cooled and frozen Mercury metal. There was a frozen core of a metallic paste, which served as a “high permeability material” for the EMG (electromagnetic-gravitational) field.” THE STORY BEHIND THE BELL.

One thought on “DIE GLOCKE: THE NAZI BELL”