Islands in the stream: The extraordinary homemade dams holding back the Mississippi as desperate residents try to save their homes

Residents go to extreme measures to save their homes

We’ve all undertaken home improvements but these residents in flood-stricken Mississippi have had to embark on major construction projects just to protect their houses and livelihoods.

These homes in Vicksburg are all situated along the Yazoo River, a tributary of the overflowing Mississippi River, and their owners have surrounded themselves with tons of earth and sand.

With questions over whether the main levees that protect the area from floods would hold, these farmers took no chances and have so far saved their homes and crops from destruction.
See the video below… 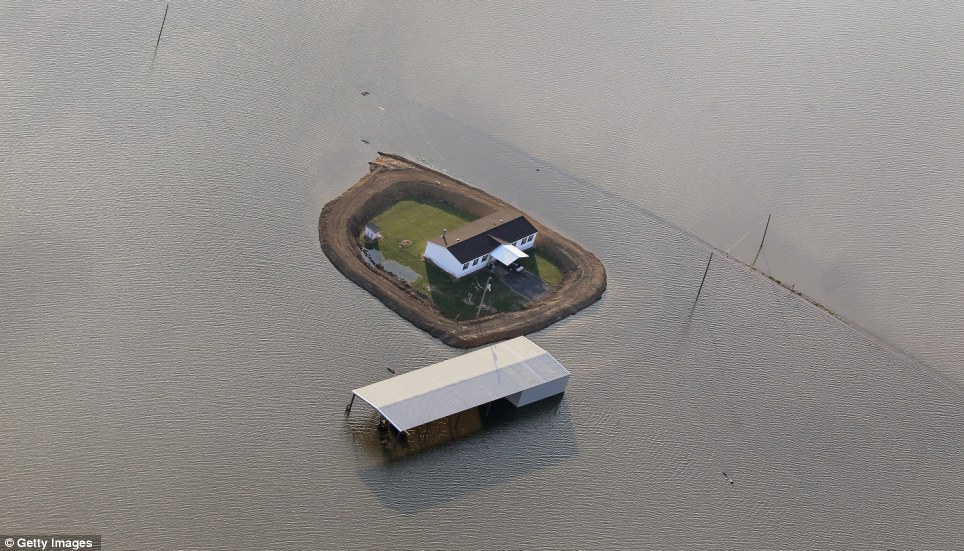 Leaking: This homeowner sealed off the driveway to their house but water has crept in over the back of the makeshift levee – not surprising when the Mississippi River’s height has swollen to 56.3 feet – a record high 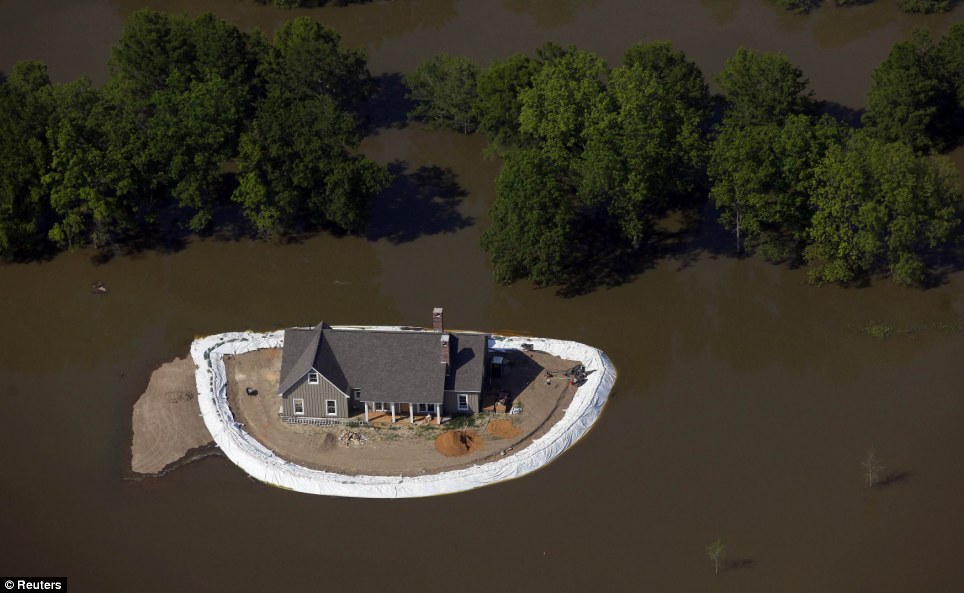 Braced: The flooding is expected to reach its highest point in Vicksburg tomorrow

The destruction is enormous and ever-growing. Unfortunately, Americans not directly affected by the destruction seem to be paying very much attention. These pictures are not isolated. This catastrophe reaches across multiple states, destroying thousands of homes and forcing many into a refugee status. After devastating tornadoes and wildfires, they now have to face a flood of near biblical proportions. And, here, in America! These disasters remind us of who REALLY is in control. Who has the power. Man, or God. From anyone’s vantage point. We see who wins that battle. If you are in a position to help your fellow Americans. Please do so! And if YOU are not prepared for a sudden emergency. PREPARE HERE

DIY: This home in Vicksburg, Mississippi is surrounded by tons of earth and sand as its owner tries to hold back the floodwaters from the Yazoo River

The flooding, which has been ongoing since the last week of April, is expected to reach its peak in Vicksburg tomorrow.

However, temporary measures have not worked for everyone.

The flooding claimed its first life today, after an elderly man slipped while clinging to a fence and drowned before authorities could come to his aid.

Two firefighters on a boat patrol on Wednesday spotted Walter Cook, 69, holding on to the fence in chest-deep water. By the time they reached him, Cook was floating in the water.

The elderly man died overnight at River Region Medical Center in Vicksburg of ‘hypoxic brain injury due to drowning,’ the coroner stated.

Hypoxia is an abnormal condition resulting from a decrease in the oxygen supplied to or utilised by body tissue.

Access route: A small white boat at the right of this protected house gives some idea of how the residents may get to the road with their home cut off 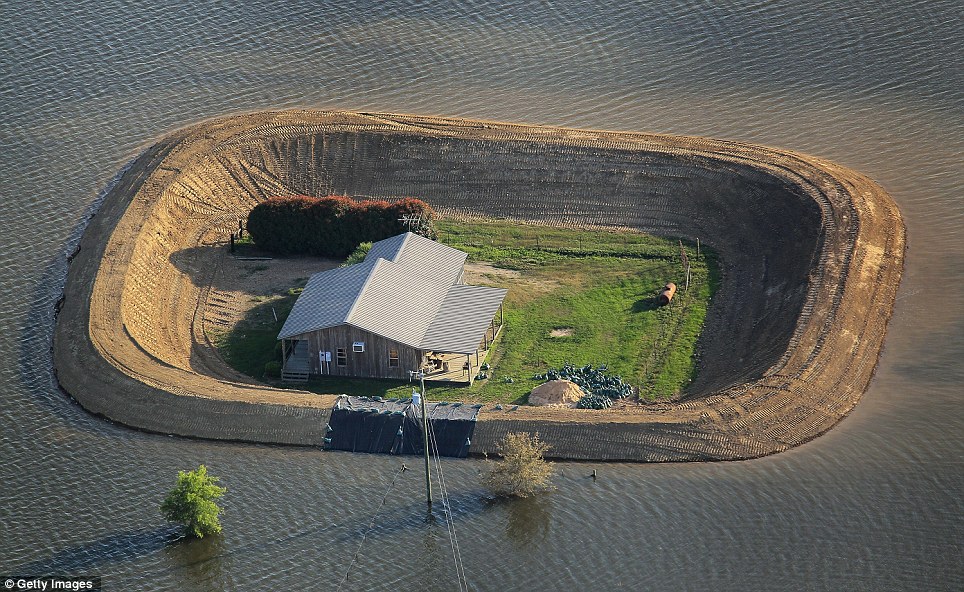 No room with a view: The walls of the levee are almost the same height as the roof of the house 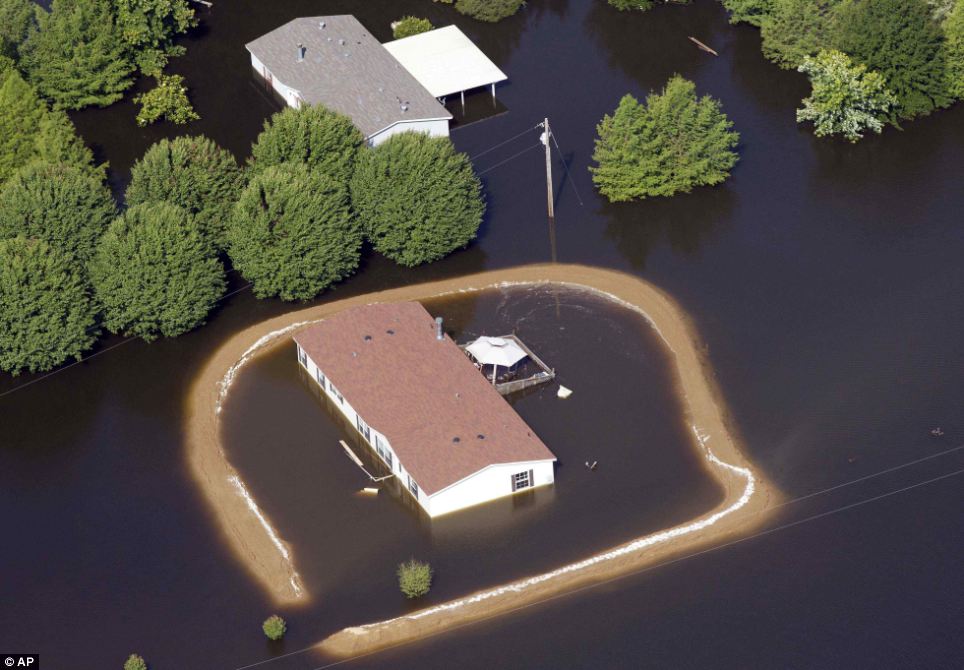 Not quite so resilient: The homemade dam around this home in Vicksburg wasn’t quite high enough

Vicksburg has seen the worst of the floods with the Mississippi River’s height swelling to 56.3 feet at its highest point, eclipsing the record set in 1927.

Employees at Dirt Works, Inc, a cement production business in South Vicksburg, built a makeshift levee to protect the business but it burst on Monday.

With heavy rains having left the ground saturated there has been widespread flooding along three million acres of farmland from Illinois to Louisiana along the Mississippi.

Around 15 miles of the Mississippi River, which had been closed since Tuesday, has now been reopened with the region and the nation absorbing huge financial losses from the closure. 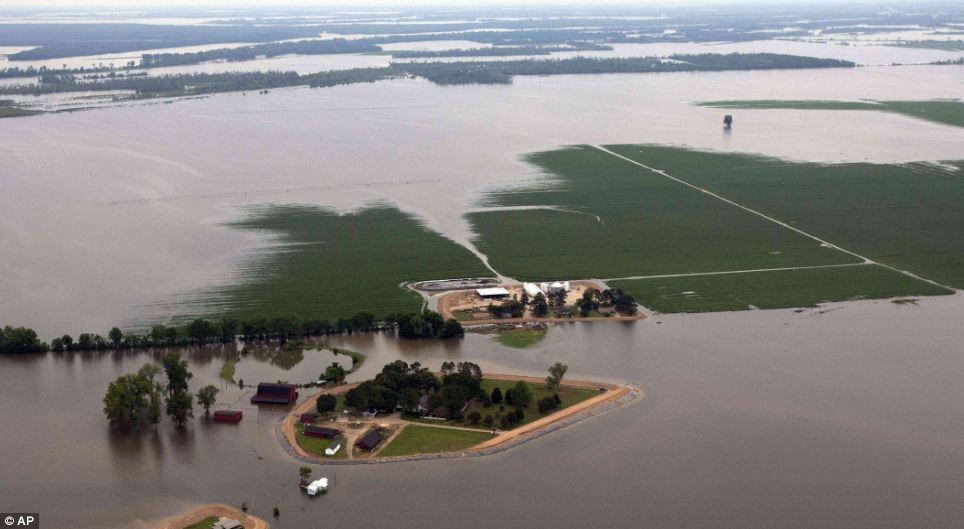 Washout: Floodwater from the Yazoo river creeps across fields of crops near Yazoo City 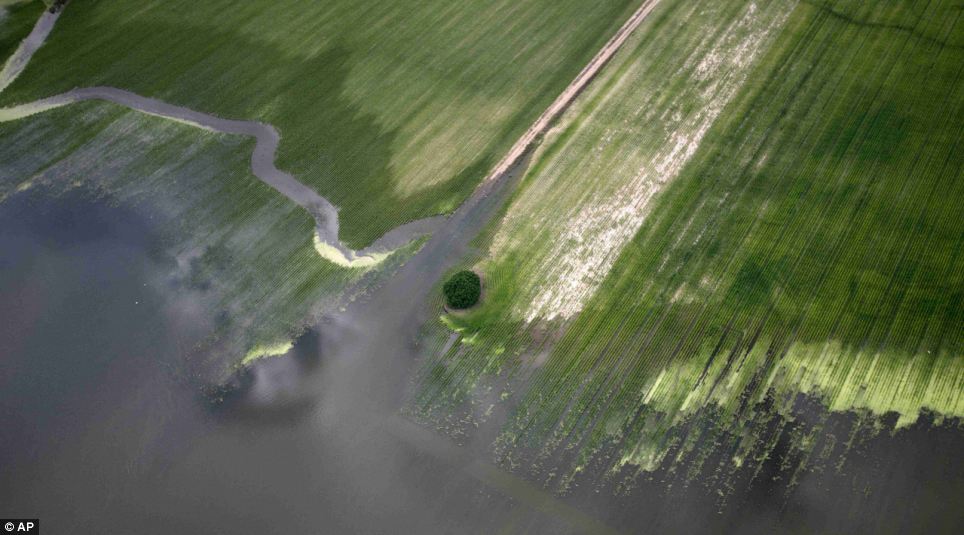 If mother nature could paint: Water sweeps across acres of fields like a paint brush 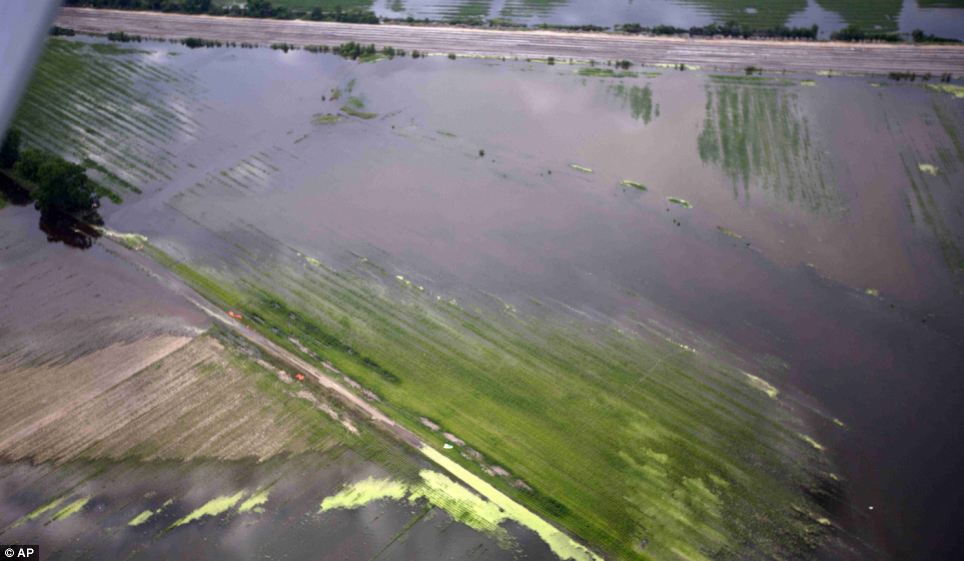 Beautiful disaster: The image from above of water flooding fields looks like modern art 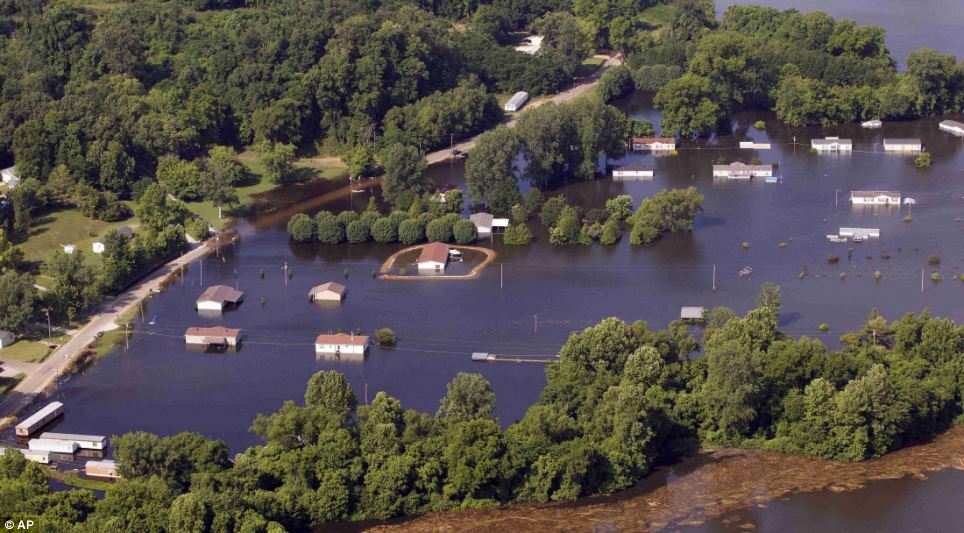 Devastated: This aerial shot over Vicksburg shows the ominous rise of floodwater around homes 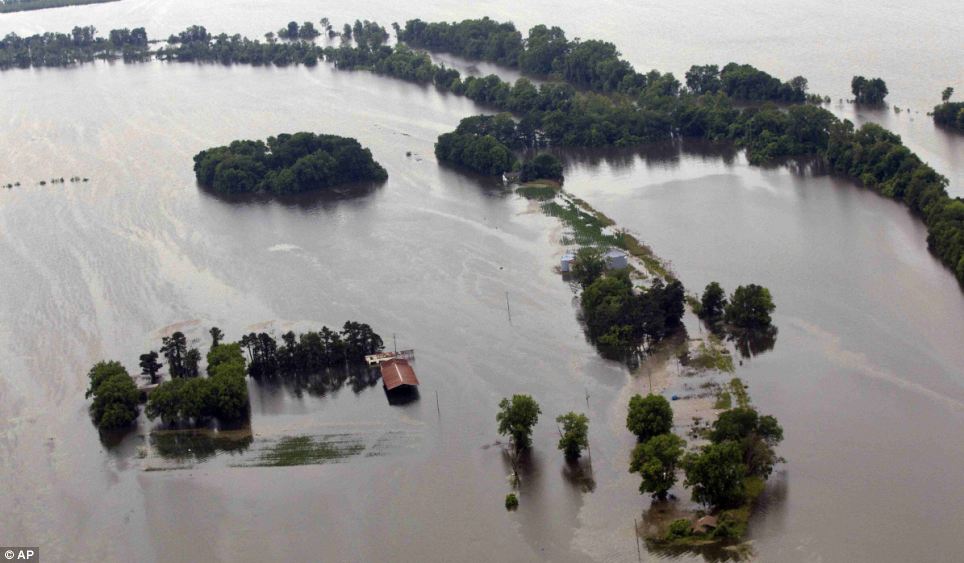 Sinking: Little more than the tops of trees remain above the water’s surface 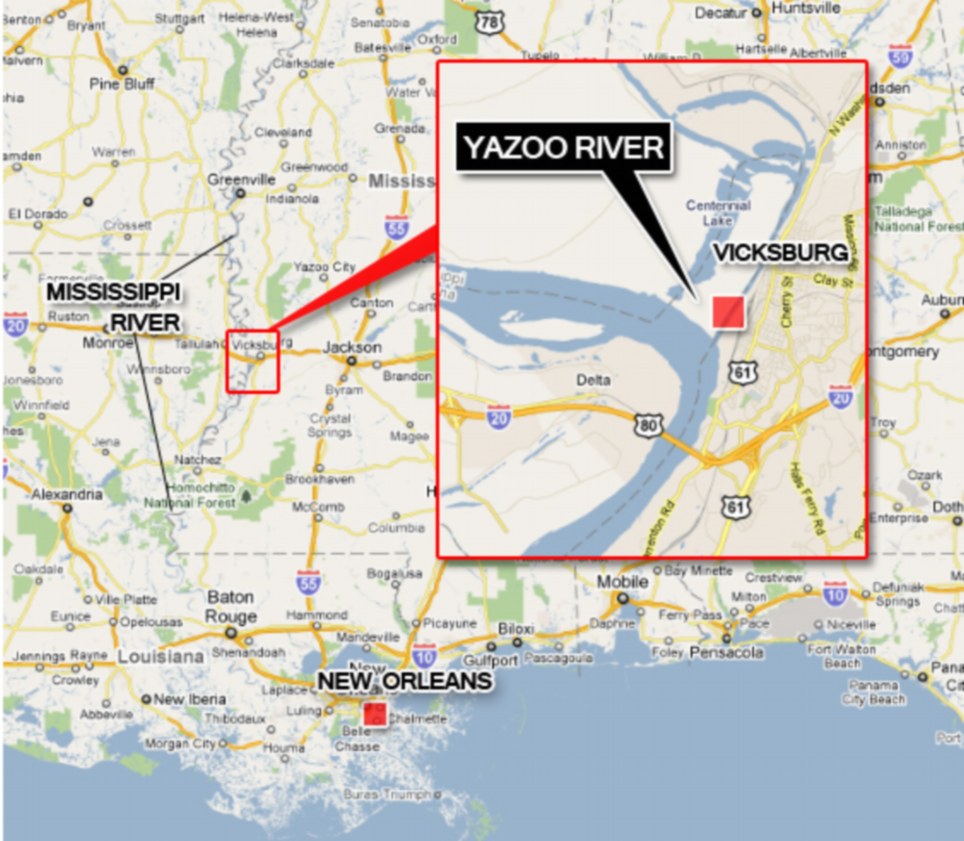 Some 600 boats use the river every day, transporting 500m tons of cargo, keeping the river closed for any length of time would potentially cripple local industries and dent the American economy.

Economic experts had warned earlier this week that the closure of the river could cost $300m a day.

The 15-mile stretch at Natchez in Vicksburg had been closed because waters were near the very top of the levee and it was feared wake from passing ships may cause the levee to breach.

But on Wednesday, forecasters lowered their expectation for how high floodwaters will get.

They are now predicting that the Mississippi River will crest at Vicksburg at 57.1 feet tomorrow, lower than recent predictions, and that if the water does go over the Yazoo Backwater Levee, it will be only a trickle. 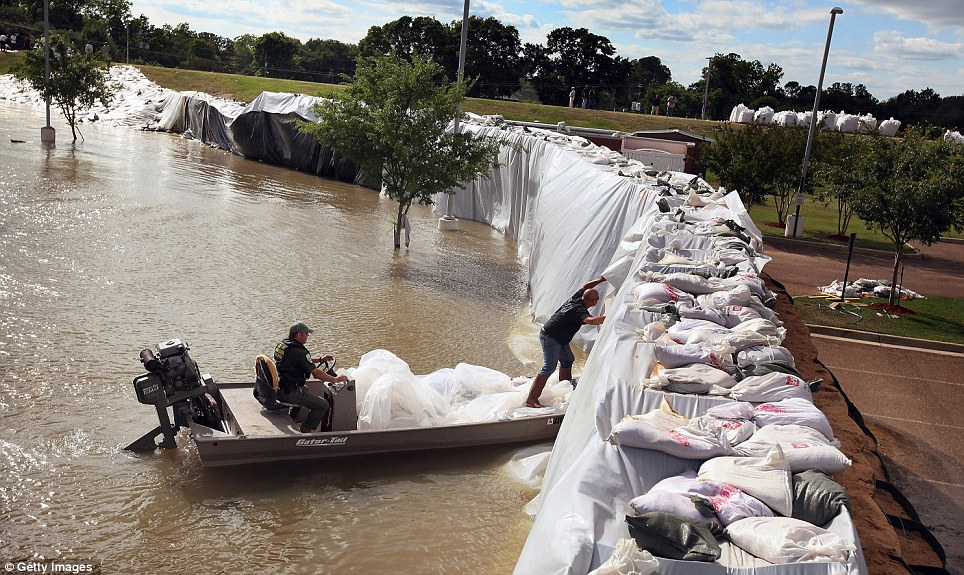