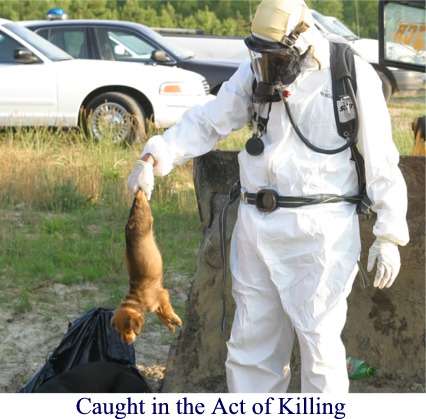 Documents: PETA kills more than 95 percent of pets in its care

By Alexandra Myers – The Daily Caller

Documents published online this month show that People for the Ethical Treatment of Animals, an organization known for its uncompromising animal-rights positions, killed more than 95 percent of the pets in its care in 2011.

The documents, obtained from the Virginia Department of Agriculture and Consumer Services, were published online by the Center for Consumer Freedom, a non-profit organization that runs online campaigns targeting groups that antagonize food producers.

Fifteen years’ worth of similar records show that since 1998 PETA has killed more than 27,000 animals at its headquarters in Norfolk, VA.

In a February 16 statement, the Center said PETA killed 1,911 cats and dogs last year, finding homes for only 24 pets.

“PETA hasn’t slowed down its slaughterhouse operation,” said Rick Berman, CCF’s executive director. “It appears PETA is more concerned with funding its media and advertising antics than finding suitable homes for these dogs and cats.”

In a statement, Berman added that PETA has a $37 million dollar annual budget.

His organization runs PETAkillsAnimals.com, which reports that in 2010 a resident of Virginia called PETA and asked if there was an animal shelter at the group’s headquarters. PETA responded that there was not.
Ads by Google

The Virginian, the website reports, then called his state’s agriculture department. Dr. Daniel Kovich investigated, and conducted an inspection of PETA’s headquarters.

“The facility does not contain sufficient animal enclosures to routinely house the number of animals annually reported as taken into custody,” Kovich concluded in his report.

Kovich also determined that PETA employees kill 84 percent of the animals in their custody within 24 hours of receiving them.

PETA media liaison Jane Dollinger told The Daily Caller in an email that “most of the animals we take in are society’s rejects; aggressive, on death’s door, or somehow unadoptable.”

Dollinger did not dispute her organization’s sky-high euthanasia rate, but insisted PETA only kills dogs and cats because of “injury, illness, age, aggression, or because no good homes exist for them.”

PETA’s own history, however, shows that this has not always been the case.

In 2005, two PETA employees described as “adorable” and “perfect” some of the dogs and cats they killed in the back of a PETA-owned van. The two were arrested after police witnessed them tossing the animals’ dead bodies into a North Carolina dumpster.

PETA had no comment when the Daily Caller asked what sort of effort it routinely makes to find adoptive homes for animals in its care.

The Supreme Court’s recent ruling overturning the warrantless use of GPS tracking devices has caused a “sea change” inside the...