Slavery may be over, but it seems African-Americans are still the target of racial oppression. Abortion is what more and more people are calling “The Black Genocide.”

“For every 1.3 live births in the black community, 1 child is aborted. This is not liberation. This is elimination.”

American elites (Rockefeller, Ford, Kellogg, Carnegie) championed and funded the racist beliefs of eugenics, a philosophy of breeding a superior race. It called for the prevention of procreation of the ‘unfit’ through social programs of segregation, forced sterilizations, and widespread birth control. The Negro Project (spearheaded by Planned Parenthood’s founder, Margaret Sanger) was the effort to severely reduce or eliminate the reproduction of poorer blacks. And Planned Parenthood’s relentless efforts continue today.

Campaign Fights Back Against Black Genocide Of Abortion

Asserts the conservative Republican commentator in California, about a 70-billboard campaign targeting black Los Angeles residents: “A campaign launched in Los Angeles this week seeks to raise awareness to what is becoming known as ‘black genocide’ — the devastation occurring in black America as result of abortion. It’s modeled after a highly successful similar campaign conducted in Atlanta earlier [last year] by Georgia Right to Life and the Radiance Foundation. According to just released data from the Guttmacher Institute, 1.21 million abortions were performed in the United States in 2008. Some 30 percent of these abortions were performed on black women. With blacks accounting for about 12 percent of the U.S. population, the tragic disproportionate rate of abortion in this community is clear.”

She continues: “Personal responsibility is central to a functioning free society. The Roe v Wade decision legalizing abortion, enshrining sex for amusement and the illusion of sex without consequences, was a frontal assault on our culture of personal responsibility. In 1969, three years before Roe v Wade, 68 percent of Americans said premarital sex is wrong. Today 32 percent say it is wrong. Removing marriage as the framework for sex and children has produced results that don’t surprise. There have been 50 million abortions since 1973. And we’ve gone from 10 percent of American babies born to unwed mothers in 1970 to 40 percent today.”

More commentary from Ms. Parker, about abortion: “A black child has a 50-percent chance of being aborted and, if born, a 70-percent chance of living in a single parent home. Planned Parenthood, who provides a third of our nation’s abortions, gets $300 million annually from the federal government that they use to set up in black neighborhoods to perpetuate this dismal reality. The Issues4Life Foundation and the Radiance foundation are fighting back. The idea is that the beginning of solving any problem is building awareness. The goal for the billboard campaign is to plant seeds in the minds of blacks and all Americans that the future for all of us can only be in a culture of life, family, and personal responsibility.” 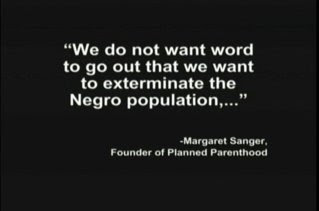 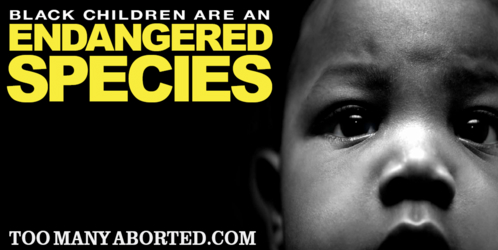