A shocking new study published in a prestigious medical journal has found a direct statistical link between higher vaccine doses and infant mortality rates in the developed world, suggesting that the increasing number of inoculations being forced upon children by medical authorities, particularly in the United States which administers the highest number of vaccines and also has the highest number of infant deaths, is in fact having a detrimental impact on health.

The study, entitled Infant mortality rates regressed against number of vaccine doses routinely given: Is there a biochemical or synergistic toxicity?, was conducted by Neil Z. Miller and Gary S. Goldman. It was published in the reputable Human and Experimental Toxicology journal, which is indexed by the National Library of Medicine.

According to his biography, “Goldman has served as a reviewer for the Journal of the American Medical Association (JAMA), Vaccine, AJMC, ERV, ERD, JEADV,and British Medical Journal (BMJ). He is included on the Editorial Board of Research and Reviews in BioSciences.” 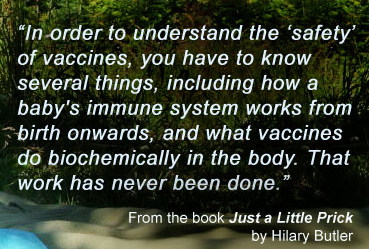 Miller, a medical research journalist and the Director of the Thinktwice Global Vaccine Institute, has been studying the dangers of vaccines for 25 years.

Despite the fact that the United States administers the highest number of vaccine doses to children in the entire developed world, 26 before infants reach the age of one, its infant mortality rate is higher than 33 other nations, all of which administer less vaccines. The study clearly illustrates the fact that developed countries which administer less vaccines have lower infant mortality rates, suggesting a direct statistical link between vaccination side-effects and infant deaths.

For example, the two developed countries that require children be immunized with the least amount of vaccines, Japan and Sweden, also top the table for the lowest infant mortality rates.

Of the top ten developed countries with the lowest infant mortality rates, seven of the ten also appear in the top ten table of countries that administer the least vaccines.

When looked at in comparison, the table of countries ordered by which ones administer the least vaccines compared to the table which orders countries based on infant mortality rates is very similar.

Despite the fact that it administers the most vaccines, the United States has the highest infant mortality rate of all developed countries, with an average of 6.22 deaths per 1000 live births. The US has a far higher infant mortality rate than the likes of Cuba or Slovenia despite spending vastly more on health care.