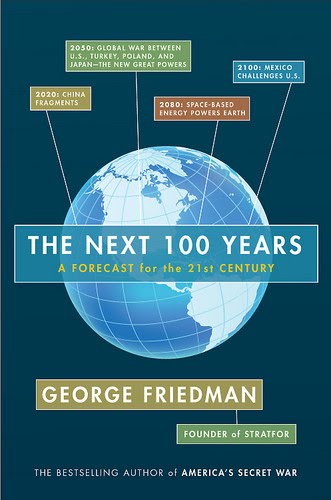 Talk about taking the long view. Stratfor founder George Friedman takes a stab at predicting what the world will look like a hundred years from now in a provocative forthcoming book, The Next 100 Years.

Contrary to those who see the rise of China as the next major historical development, Friedman argues that the next century will continue to to be dominated by the United States.

There are many who predict that China is the next challenger to the United States, not Russia. I don’t agree with that view for three reasons. First, when you look at a map of China closely, you see that it is really a very isolated country physically. Second, China has not been a major naval power for centuries, and building a navy requires a long time not only to build ships but to create well-trained and experienced sailors.

Third, there is a deeper reason for not worrying about China. China is inherently unstable. Whenever it opens its borders to the outside world, the coastal region becomes prosperous, but the vast majority of Chinese in the interior remain impoverished. This leads to tension, conflict, and instability. It also leads to economic decisions made for political reasons, resulting in inefficiency and corruption.

With a history of militarism, Japan will not remain the marginal pacifistic power it has been. It cannot. Its own deep population problems and abhorrence of large- scale immigration will force it to look for new workers in other countries.

Turkey is a stable platform in the midst of chaos. The Balkans, the Caucasus, and the Arab world to the south are all unstable. As Turkey’s power grows — and its economy and military are already the most powerful in the region — so will Turkish influence.

First will be the decline of Germany. Its economy is large and still growing, but it has lost the dynamism it has had for two centuries. In addition, its population is going to fall dramatically in the next fifty years, further undermining its economic power. Second, as the Russians press on the Poles from the east, the Germans won’t have an appetite for a third war with Russia. The United States, however, will back Poland, providing it with massive economic and technical support. Wars — when your country isn’t destroyed—stimulate economic growth, and Poland will become the leading power in a coalition of states facing the Russians.

Finally, Mexico will be emboldened by the population bust in the developed world that will create a major labor shortage in advanced industrial countries, Friedman argues.

The United States will be competing for increasingly scarce immigrants and will be doing everything it can to induce Mexicans to come to the United States—an ironic but inevitable shift.

These changes will lead to the final crisis of the twenty-first century. As the Europeans slip out, the Mexicans, like the Turks, will rise in the rankings until by the late twenty-first century they will be one of the major economic powers in the world. During the great migration north encouraged by the United States, the population balance in the old Mexican Cession (that is, the areas of the United States taken from Mexico in the nineteenth century) will shift dramatically until much of the region is predominantly Mexican.

Turkey emerging as leader in North Africa and Arab world

Since the beginning of the public revolts in the Arab world and North Africa early this year, which has so...