The Trilateral Commission was established in 1973. Its founder and primary financial angel was international financier, David Rockefeller, longtime chairman of the Rockefeller family-controlled Chase Manhattan Bank and undisputed overlord of his family’s global corporate empire.

Rockefeller’s idea for establishing the commission emerged after he had read a book entitled Between Two Ages written by an Establishment scholar, Prof. Zbigniew Brzezinski of Columbia University.

In his book Brzezinski proposed a vast alliance between North America, Western Europe and Japan. According to Brzezinski, changes in the modern world required it.

“Resist as it might,” Brzezinski wrote elsewhere, “the American system is compelled gradually to accommodate itself to this emerging international context, with the U.S. government called upon to negotiate, to guarantee, and, to some extent, to protect the various arrangements that have been contrived even by private business.” 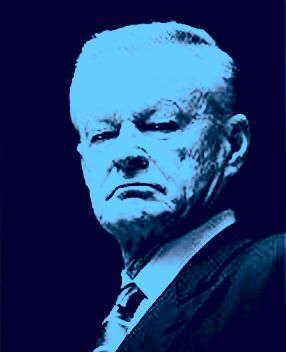 In other words, it was necessary for the international upper class to band together to protect its interests, and to ensure, in the developed nations, that political leaders were brought to power who would ensure that the global financial interests (of the Rockefellers and the other ruling elites) would be protected over those of the hoi polloi.

Although the initial arrangements for the commission were laid out in a series of meetings held at the Rockefeller’s famous Pocantico Hills estate outside New York City, Rockefeller first introduced the idea of the commission at an annual meeting of the Bilderberg group, this one held in Knokke, Belgium in the spring of 1972.

(The Bilderberg group is similar to the Trilateral Commission in that it is funded and heavily influenced by the Rockefeller empire, and composed of international financiers, industrialists, media magnates, union bosses, academics and political figures.

(However, the much older Bilderberg group’s membership is strictly limited to participants from the United States, Canada and Western Europe: i.e. the NATO alliance. For more on the Bilderberg group, keep an eye out for future stories in this paper.

The Trilateral Commission was unique, though, in that it brought the Japanese ruling elite into the inner councils of the global power brokers, a recognition of Japan’s growing influence in the world economic and political arena.

“The Commission’s purpose is to engineer an enduring partnership among the ruling classes of North America, Western Europe and Japan — hence the term ‘Trilateral’ — in order to safeguard the interests of Western capitalism in an explosive world. The private commission is attempting to mold public policy and construct a framework for international stability in the coming decades.

“To put it simply, Trilateralists are saying: The people, governments and economies of all nations must serve the needs of multinational banks and corporations.

“In short, Trilateralism is the current attempt by ruling elites to manage both dependence and democracy — at home and abroad.”

Another Trilateral critic, now-retired Sen. Barry Goldwater (R-Ariz.), views the commission as a Rockefeller family operation through and through. According to Goldwater: 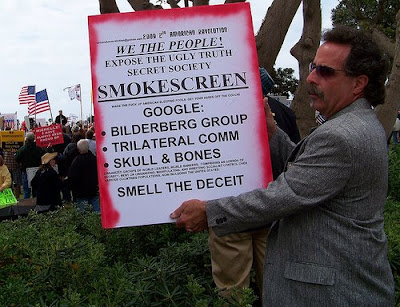 David Rockefeller and Brzezinski then began the process of selecting from among the “Trilateral” nations the several hundred elite power brokers who would be permitted to join in Trilateral policymaking in the coming years.

One of the commission’s primary goals was to place a Trilateral-influenced president in the White House in 1976, and to achieve that goal it was necessary to groom an appropriate candidate who would be willing to cooperate with Trilateral aims.

Rockefeller and Brzezinski selected a handful of well-known liberal Democrats and a scattering of Republicans (primarily of the liberal-internationalist bent) to serve on the commission.

And in an effort to give regional balance to the commission Rockefeller invited the then-obscure one-term Democratic governor of Georgia, Jimmy Carter, to join the commission.
ROCKEFELLER CENTER SOUTH

Rockefeller had longtime ties to the local Atlanta political and economic Establishment. In fact, much of Rockefeller’s personal investment portfolio is in Atlanta real estate. (According to David Horowitz, co-author of The Rockefellers, “Atlanta is Rockefeller Center South.”)

And Rockefeller himself had once even invited Carter to dine with him at the Chase Manhattan Bank several years before, as early as 1971, the year Carter began serving as governor.

Carter very definitely impressed Rockefeller and Brzezinski, more so than another Southern Democrat, Florida Gov. Reuben Askew, also selected to serve on the commission and viewed, like Carter, as a possible Trilateral candidate.

In fact, according to Brzezinski, “It was a close thing between Carter and Askew, but we were impressed that Carter had opened up trade offices for the state of Georgia in Brussels and Tokyo. That seemed to fit perfectly into the concept of the Trilateral.”

Carter, in fact, like Askew, did announce for the 1976 Democratic presidential nomination, but because of Rockefeller’s interest, Carter had the inside shot.

So much so that in a speech at the commission’s first annual meeting in Kyoto, Japan in May of 1975, Rockefeller’s man Brzezinski promoted the then-still obscure Carter to his fellow Trilateralists as an ideal presidential candidate.

From that point on, it was all cut and dried. According to Goldwater: “Rockefeller and Brzezinski found Carter to be their ideal candidate. They helped him win the Democratic nomination and the presidency.

“To accomplish this purpose they mobilized the money-power of the Wall Street bankers, the intellectual influence of the academic community — which is subservient to the wealth of the great tax-free foundations — and the media controllers represented in the membership of the CFR and the Trilateralists.”

(The aforementioned Council on Foreign Relations — is another Rockefeller-financed foreign policy pressure group similar to the Trilateralists and the Bilderberg group, although the CFR is composed solely of American citizens.)

(In his book The Carter Presidency and Beyond, published in 1980 by the Ramparts Press, Prof. Laurence H. Shoup devotes an entire chapter to demonstrating how the Trilateral-linked and Trilateral-controlled Establishment media promoted the presidential candidacy in 1976 of the then-obscure Georgia Gov. Jimmy Carter.)

Carter, of course, campaigned as a “populist” — as a “man of the people” — as an “outsider” with no ties to the Establishment. The fact is, however, Carter, who said he’d never lie, was an elitist, an insider, the Trilateral Commission’s “man on the white horse.”

And with the power of the commission and the Rockefeller empire and its media influence behind him, Carter made his way to the presidency, establishing the first full-fledged Trilateral administration, appointing numerous Trilateralists to key policymaking positions and carrying out the Trilateral agenda to the hilt.

The Trilateral Commission is a private organization, established to foster closer cooperation among the United States, Europe and Japan. It was founded in July 1973 at the initiative of David Rockefeller, who was Chairman of the Council on Foreign Relations at that time. The Trilateral Commission is widely seen as an off-shoot of the Council on Foreign Relations.[1]
Contents

Speaking at the Chase Manhattan International Financial Forums in London, Brussels, Montreal, and Paris, Rockefeller proposed the creation of an International Commission of Peace and Prosperity in early 1972 (which would later become the Trilateral Commission). At the 1972 Bilderberg meeting, the idea was widely accepted, but elsewhere, it got a cold reception. According to Rockefeller, the organization could “be of help to government by providing measured judgment.”

Zbigniew Brzezinski, a professor at Columbia University and a Rockefeller advisor who was a specialist on international affairs, left his post to organize the group along with:

Funding for the group came from David Rockefeller, the Charles F. Kettering Foundation, and the Ford Foundation.

In July 1972, Rockefeller called his first meeting, which was held at Rockefeller’s Pocantico compound in New York’s Hudson Valley. It was attended by about 250 individuals who were carefully selected and screened by Rockefeller and represented the very elite of finance and industry.

Its first executive committee meeting was held in Tokyo in October 1973. The Trilateral Commission was officially initiated, holding biannual meetings.

A Trilateral Commission Task Force Report, presented at the 1975 meeting in Kyoto, Japan, called An Outline for Remaking World Trade and Finance, said: “Close Trilateral cooperation in keeping the peace, in managing the world economy, and in fostering economic development and in alleviating world poverty, will improve the chances of a smooth and peaceful evolution of the global system.” Another Commission document read:

“The overriding goal is to make the world safe for interdependence by protecting the benefits which it provides for each country against external and internal threats which will constantly emerge from those willing to pay a price for more national autonomy. This may sometimes require slowing the pace at which interdependence proceeds, and checking some aspects of it. More frequently however, it will call for checking the intrusion of national government into the international exchange of both economic and non-economic goods.”

In May 1976, the first plenary meeting of all of the Commission’s regional groups took place in Kyoto, attended by Jimmy Carter.[3] Today it consists of approximately 300–350 private citizens from Europe, the Asia-Pacific region, and North America, and exists to promote closer political and economic cooperation between these areas, which are the primary industrial regions in the world.[3] Its official journal from its founding is a magazine called Trialogue.

At first, Asia and Oceania were represented only by Japan. However, in 2000 the Japanese group of 85 members expanded itself, becoming the Pacific Asia group, composed of 117 members: 75 Japanese, 11 South Koreans, seven Australian and New Zealand citizens, and 15 members from the ASEAN nations (Indonesia, Malaysia, Philippines, Singapore and Thailand). The Pacific Asia group also includes nine members from China, Hong Kong and Taiwan.

The John Birch Society believes that the Trilateral Commission is dedicated to the formation of one world government (which they consider would be a negative outcome). Conservative Democratic congressman from Georgia and second head of the John Birch Society, Larry McDonald, introduced American Legion National Convention Resolution 773 to the House of Representatives calling for a congressional investigation into the Trilateral Commission.

Certain critics, such as Alex Jones, an American paleoconservative of “The Obama Deception” documentary, claim the “Commission constitutes a conspiracy seeking to gain control of the U.S. Government to create a new world order.” Mike Thompson, Chairman of the Florida Conservative Union, said: “It puts emphasis on interdependence, which is a nice euphemism for one-world government.”

Senator Barry Goldwater wrote in his book With No Apologies: “In my view, the Trilateral Commission represents a skillful, coordinated effort to seize control and consolidate the four centers of power: political, monetary, intellectual, and ecclesiastical. All this is to be done in the interest of creating a more peaceful, more productive world community. What the Trilateralists truly intend is the creation of a worldwide economic power superior to the political governments of the nation-states involved. They believe the abundant materialism they propose to create will overwhelm existing differences. As managers and creators of the system they will rule the future.”

“Several of whom had been involved with the Trilateral Commission, but then that’s almost everybody at one time or another.” This comment was made during an exit interview by the White House Adviser on Domestic and Foreign Policy, Hedley Donovan, under President Jimmy Carter, in reference to when he was gathering a group of foreign policy figures to convene during the Soviet brigade in Cuba. Although initially opposed to Trilateral, “President Reagan ultimately came to understand Trilateral’s value and invited the entire membership to a reception at the White House in April 1984”, noted David Rockefeller in his memoirs.

David Rockefeller (1977–91) Founder of the Trilateral Commission and Honorary North American Chairman; Chairman of the Chase Manhattan Bank board from 1969 to 1981; Chairman of the Council on Foreign Relations from 1970 to 1985, now honorary Chairman; a life member of the Bilderberg Group.

Others who are or have been members

One thought on “TRILATERAL COMMISSION”