“As president, Obama has maintained the occupation of Iraq and escalated the war in Afghanistan,” said Heaney. “The antiwar movement should have been furious at Obama’s ‘betrayal’ and reinvigorated its protest activity.”

“Instead, attendance at antiwar rallies declined precipitously and financial resources available to the movement have dissipated. The election of Obama appeared to be a demobilizing force on the antiwar movement, even in the face of his pro-war decisions.”

“Since Democrats are more numerous in the population at large than are members of third parties, the withdrawal of Democrats from the movement in 2009 appears to be a significant explanation for the falling size of antiwar protests,” Heaney said. “Thus, we have identified the kernel of the linkage between Democratic partisanship and the demobilization of the antiwar movement.”

Democrats and other liberal supporters of the establishment are not opposed to mass murder and wanton slaughter by the state – they merely oppose it when Republicans do it. Opposition is a partisan formality. 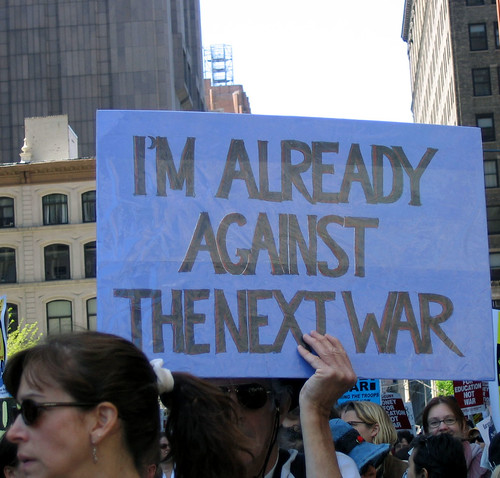 Congress Democrats often howled about “Bush’s Wars” in Iraq and Afghanistan, but supported them – including the mass murder of 1.5 million Iraqis, a war criminal of immense proportion – by continuing to fund them. The number of anti-war Democrats in Congress who worked to defund the illegal occupations of Afghanistan and Iraq was miniscule.

Obama duped the so-called anti-war faction of his party during the election. He said he’d bring home the troops and close down Gitmo. During the primaries, he tried to make Hillary Clinton look like the war candidate.

Once elected as savior, Obama not only continued Bush’s war policies – in fact the war policies of the global elite – but expanded them. Troops remain in Afghanistan and Iraq. The Pentagon and the CIA stepped up the terror campaign in Pakistan. Gitmo remains open.

History repeats itself. In 1999, then president Clinton attacked Yugoslavia. Democrats and liberals cheered him on. Congress was silent. Only four Democrats objected. In the House, there was only one, Barbara Lee of California. In the Senate, just three – Russ Feingold of Wisconsin, Fritz Hollings of South Carolina, and Jeff Bingaman of New Mexico.

Both Republicans and Democrats love mass murder and military conquest. War is the health of the state, declared Randolph Bourne as the First World War unfolded. The Great War extracted a great toll – 37 million casualties. London and Wall Street bankers cooked up that devastating war and every one since, including the one now expanding in Libya as a U.S. general hints the government will soon send in ground troops and thus initiate a third war in the Arab and Muslim Middle East.

Democrats are so enthusiastic about the murder campaign in Libya, they didn’t even bother to vote on it, not that Obama gave them a chance – like Bush before him, he used the unchecked power of a unitary presidency to attack the African country. “He has proceeded in a way that is cautions and thoughtful,” said a proud Carl Levin, Michigan Democrat. “He has put the ducks in a row before he decided the United States should take the lead for a short period of time to do what only we could do.”

Ohio Democrat Dennis Kucinich stands alone in the wilderness with Rep. Ron Paul. He said Obama’s unconstitutional attack “is an act of war” and an impeachable offense. “The president made statements which attempt to minimize U.S. action, but U.S. planes may drop U.S. bombs and U.S. missiles may be involved in striking another sovereign nation. War from the air is still war,” he said in a lengthy speech on the House floor, a speech mostly ignored by fellow Democrats.

“It is hard to imagine that Congress, during the current contentious debate over deficits and budget cutting, would agree to plunge America into still another war, especially since America will spend trillions in total for the wars in Afghanistan, Iraq and incursions into Pakistan,” he said.

Really, it is not hard to imagine at all. Democrats and Republicans do the bidding of the global elite and the global bankster elite not only want war in the Middle East, they want the enslaving debt that invariably comes with it.

In 2003, as he prepared to attack Iraq, Bush dismissed the antiwar movement as a focus group. Democrats are not so crude. Instead, they deem their war “humanitarian,” as a previous war criminal, Bill Clinton, did as he bombed the former Yugoslavia with depleted uranium, in effect launching a nuclear war against that small country.

FOOD security will be the greatest challenge to civilisation this century, with shortages leading to higher prices, political instability and...