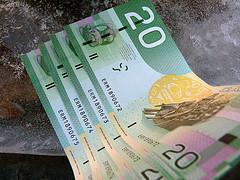 When I think of paying with plastic, I think of credit or debit cards. However, my thought process is going to have to change. Canada will soon join a growing list of countries that use a polymer-based plastic instead of paper for its cash. The new plastic money will be rolled out in phases with the $100 bill scheduled for introduction in November. In March 2012, a $50 bill will be added to the mix and the rest of the smaller bills will be introduced by the end of 2013.

There are several benefits to plastic cash – enhanced security, a longer life and the money is even cleaner. We all know how dirty money can be but the new bills are resistant to water, oil, sweat, dust and more.

“Further, scientific evaluation has shown that there is significantly less bacteriological growth on polymer banknotes, and that any bacteria which gets onto the notes quickly dies because of the lack of nutrients on the non-porous and non-fibrous material.” Source: Securency International Pty Ltd.

While the cleanliness factor is nice, the security benefits are one of the biggest draws of switching to plastic money. Australia has been using polymer-based cash for more than a decade and the country has seen a significant reduction in counterfeit bills.

The polymer-based money is also recyclable. The money is made out of polypropylene, which can be recycled and used to create new products including plumbing fittings, compost bins and other household items.

I can’t think of a downside to plastic money. I know that BPA is often associated with plastics but even our paper money is contaminated with BPA.

This list really should be called The DiversityInc Top 10 Companies for LGBT Employees and Allies, since companies that provide...