Imam Feisal Abdel Rauf claims that the US constitution is Sharia compliant. Now let us examine below a few laws of Sharia to see if Imam Rauf is truthful or a fraud:

1- Jihad defined as “to war against non-Muslims to establish the religion” is the duty of every Muslim and Muslim head of state (Caliph). Muslim Caliphs who refuse jihad are in violation of Sharia and unfit to rule.

2- A Caliph can hold office through seizure of power meaning through force.

3- A Caliph is exempt from being charged with serious crimes such as murder, adultery, robbery, theft, drinking and in some cases of rape.

4- A percentage of Zakat (alms) must go towards jihad.

5- It is obligatory to obey the commands of the Caliph, even if he is unjust.

7- The Muslim public must remove the Caliph in one case, if he rejects Islam.

8- A Muslim who leaves Islam must be killed immediately.
9- A Muslim will be forgiven for murder of : 1) an apostasy 2) an adulterer 3) a highway robber. Making vigilante street justice and honor killing acceptable.

10- A Muslim will not get the death penalty if he kills a non-Muslim.

11- Sharia never abolished slavery and sexual slavery and highly regulates it. A master will not be punished for killing his slave.

12- Sharia dictates death by stoning, beheading, amputation of limbs, flogging and other forms of cruel and unusual punishments even for crimes of sin such as adultery.

13- Non-Muslims are not equal to Muslims and must comply to Sharia if they are to remain safe. They are forbidden to marry Muslim women, publicly display wine or pork, recite their scriptures or openly celebrate their religious holidays or funerals. They are forbidden from building new churches or building them higher than mosques. They may not enter a mosque without permission. A non-Muslim is no longer protected if he commits adultery with a Muslim woman or if he leads a Muslim away from Islam.

14- It is a crime for a non-Muslim to sell weapons to someone who will use them against Muslims. Non-Muslims cannot curse a Muslim, say anything derogatory about Allah, the Prophet, or Islam, or expose the weak points of Muslims. However, the opposite is not true for Muslims.

15- A non-Muslim cannot inherit from a Muslim.

16- Banks must be Sharia compliant and interest is not allowed.

17- No testimony in court is acceptable from people of low-level jobs, such as street sweepers or a bathhouse attendant. Women in such low level jobs such as professional funeral mourners cannot keep custody of their children in case of divorce.

18- A non-Muslim cannot rule even over a non-Muslims minority.

19- Homosexuality is punishable by death.

20- There is no age limit for marriage of girls under Sharia. The marriage contract can take place anytime after birth and consummated at age 8 or 9.

21- Rebelliousness on the part of the wife nullifies the husband’s obligation to support her, gives him permission to beat her and keep her from leaving the home.

22- Divorce is only in the hands of the husband and is as easy as saying: “I divorce you” and becomes effective even if the husband did not intend it.

23- There is no community property between husband and wife and the husband’s property does not automatically go to the wife after his death.

25- A man has the right to have up to 4 wives and she has no right to divorce him even if he is polygamous.

26- The dowry is given in exchange for the woman’s sexual organs.

27- A man is allowed to have sex with slave women and women captured in battle, and if the enslaved woman is married her marriage is annulled.

28- The testimony of a woman in court is half the value of a man.

29- A woman looses custody if she remarries.

30- To prove rape, a woman must have 4 male witnesses.

31- A rapist may only be required to pay the bride-money (dowry) without marrying the rape victim.

32- A Muslim woman must cover every inch of her body which is considered “Awrah,” a sexual organ. Some schools of Sharia allow the face and some don’t.

33- A Muslim man is forgiven if he kills his wife caught in the act of adultery. However, the opposite is not true for women since he “could be married to the woman he was caught with.” 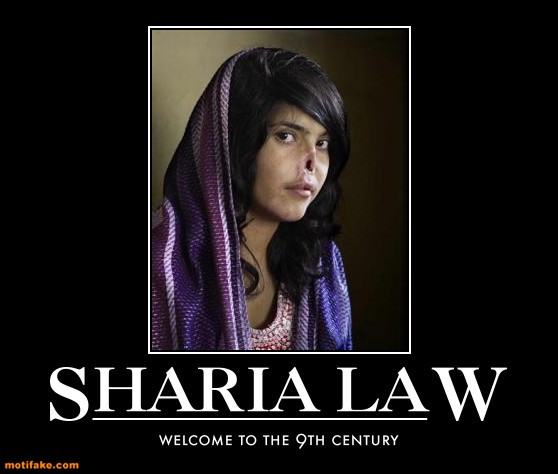 The above are clear cut laws in Islam decided by great Imams after years of examination and interpretation of the Quran, Hadith and Mohammed’s life. Now let the learned Imam Rauf tell us what part of the above is compliant with the US constitution?

6 thoughts on “Sharia law – For Dummies”

That’s the answer! A World governing body to the rescue!

“It is hoped not just in the Muslim communities but enlightened, progressive and peaceful societies across the world that an...