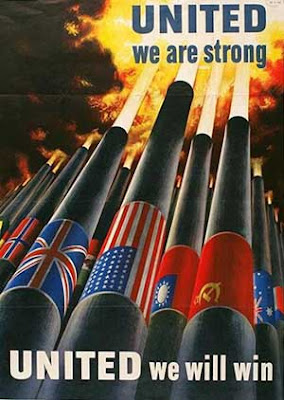 A world nuclear war is one that involves most or all nuclear powers releasing a large proportion of their nuclear weapons at targets in nuclear, and perhaps non-nuclear, states. Such a war could be initiated accidentally, aggressively or pre-emptively and could continue and spread through these means or by retaliation by a party attacked by nuclear weapons. While some speak of “limited nuclear war,” it is likely that any nuclear war will quickly escalate and spiral out of control because of the “use them or loose them” strategy. If you don’t use all your nuclear weapons you are likely to have them destroyed by the enemy’s nuclear weapons.

Such a war could start through a reaction to terrorist attacks, or through the need to protect against overwhelming military opposition, or through the use of small battle field tactical nuclear weapons meant to destroy hardened targets. It might quickly move on to the use of strategic nuclear weapons delivered by short-range or inter-continental missile or long-range bomber. These could deliver high altitude bursts whose electromagnetic pulse knocks out electrical circuits for hundreds of square miles. Or they could deliver nuclear bombs to destroys nuclear and/or non-nuclear military facilities, nuclear power plants, important industrial sites and cities. Or it could skip all those steps and start through the accidental or reckless use of strategic weapons.

Below are seven scenarios by which world nuclear war could come about. While these are some of the major scenarios and combination of attacks and retaliations, they are hardly exhaustive. U.S., Russian and other nuclear nations’ weapons strategizers deal with these scenarios every day but rarely let mere citizens in on their grizzly thinking. Citizens must end their denial and become aware of such scenarios.

Accidental: Since the United States and Russia have “launch on warning” systems that send off rockets before it is confirmed a nuclear attack is underway, any tensions between them can lead to massive nuclear war within thirty minutes of a warning — no matter how false the warning may be.

Aggressive: One or more nations decides to use weapons against nuclear or non-nuclear nations in order to promote an economic, political or military goal, as part of an ongoing war or as a first strike nuclear attack. (The state , of course, may claim it is a pre-emptive, retaliatory or even accidental attack.)

Pre-emptive: One or more nations believes (correctly or incorrectly) or claims to believe that another nuclear nation is about to use nuclear weapons against its nuclear, military, industrial or civilian targets and pre-emptively attacks that nation. May result from political or military “brinkmanship.”

Retaliatory: Use of nuclear weapons in response to a nuclear attack — or even a conventional, chemical or biological attack by a non-nuclear nation.

ASSUMPTIONS OF THESE SCENARIOS

There is a whole body of knowledge and assumptions that is taken into account when putting together scenarios like the below. My bottom line assumption is that any nuclear exchange has an excellent chance of resulting in a series of escalations that will spiral out of control, setting off a round of exchanges among various enemies under a “use it or lose it” philosophy, as well as among the treaty allies of the relevant nuclear powers and their allies. This continues until most of the planets’ 20,000 odd nuclear weapons are exhausted. In making “limited nuclear war” calculations all nations should assume “whatever can go wrong, will go wrong.” Unfortunately, too many strategizers assume they can conduct limited strikes and keep them limited.

Related assumptions include:
** Any nuclear attack on a primary Russian target like Moscow, St. Petersburg, or nuclear command headquarters, by any nation or group, known or unknown, could lead to a commander turning on “The Dead Hand” strategy and/or prompt one or more of Russia’s semi-autonomous military field commanders to retaliate against U.S. and European nuclear targets. Attacks on secondary targets or nuclear detonations very close to Russian soil also might lead to some sort of nuclear escalation.

** It is likely that the U.S., Russia, China, Israel, India and Pakistan will use some of their weapons to attack other nuclear and non-nuclear nations which might threaten them after they have been devastated by nuclear war.

** Any nuclear attack on Israel by terrorists, or Pakistan, Russia or China will result in Israel’s surviving land, air and submarine carried or based missiles being used against Arab and Muslim capitals. A particularly devastating attack (including with chemical or biological weapons) might result in possibly in a full scale “Samson Option” attack on European and Russian targets. The latter of course would result in Russian retaliation against the United States, perhaps its punishment for not having done enough to protect Israel.

** Any nation’s use of nuclear weapons against a non-nuclear nation will be only somewhat less inflammatory than using them against a nuclear nation, especially if that nation has many treaty allies. It will ratchet all nuclear nations alert systems and lead to unforeseeable consequences that could easily spiral to world nuclear war.

During time of minor or major political tension, especially active U.S. bombings of other nations or any use of nuclear weapons, Russian commanders’ faulty early warning system detects false evidence of a nuclear attack from the U.S. Russia launches a large proportion of its weapons at the U.S. and pre-emptively at U.S. European and Israeli allies, as well as China, India and Pakistan to cripple their nuclear capability. The U.S. and Europe retaliate at Russia and U.S. attacks China to destroy its nuclear stocks. Israel retaliates against Russia and initiates aggressive attacks against Arab and Muslim capitols. India and China may strike each other to destroy any remaining nuclear or other military capability. (While less likely the United States would experience such a glitch, if so, the U.S. would strike Russia and China, they would retaliate against the U.S. and Europe and probably attack other potentially hostile nuclear powers to knock out their capability.)

Russia and US engage in threats over further US aggression in the Middle East or Russia’s refusal to withdraw troops from former Soviet Republic Georgia. Russia and/or the U.S. pre-emptively strike the others’ nuclear targets, leading to further rounds of retaliatory exchanges. Russia strikes pre-emptively at U.S. European and Israeli allies, as well as China, India and Pakistan to cripple their nuclear capability. Europe retaliates at Russia and U.S. attacks China to destroy any remaining nuclear stocks. Israel retaliates against Russia and initiates revenge attacks against Arab and Muslim capitols. India and China may strike each other to destroy any remaining nuclear or other military capability.

Israel attacks Iran’s nuclear facilities and/or Syria and Lebanon. These countries respond with massive rocket attacks using conventional bombs and even some chemical, biological or radiological weapons. Israel responds with nuclear strikes against these nations and Pakistan. Outraged Pakistan retaliates against Israel and pre-emptively attacks Israel’s ally/Pakistan’s enemy India, which retaliates. Israel initiates “Samson option” and attacks Arab and Muslim capitols, as well as “antisemitic” Europe and Russia. Russian regional commanders retaliate against Israel, its ally the U.S., and U.S. European allies and China, to destroy its nuclear capability. The U.S. retaliates against Russia and hits China’s nuclear capability. China uses any remaining nuclear weapons against Russia, the U.S. and India. India retaliates against China.

Hindu and Muslim rioting or conflicts in Kashmir escalate into preemptive nuclear exchanges between India and Pakistan. A rogue Indian general strikes China which massively retaliates. Russian communications knocked out by electromagnetic pulses hit Europe and China with limited number of missiles. U.S. retaliates against Russia and attacks China to destroy its nuclear stocks. Russia retaliates against the U.S. and hits U.S. ally Israel. Israel initiates revenge attacks against Arab and Muslim capitols.

Terrorists or some unknown nation explodes one or two nuclear weapons in Russia, Israel, or U.S., possibly delivered via surreptitious means. Russia and the U.S. blame each other escalating to mutual “retaliatory” attacks, including on Europe. If Russia attacks Israel, Israel immediately initiates revenge attacks against Arab and Muslim capitols, and possibly “anti-semitic” Europe and Russia. Russia and U.S. preemptively attack China, and India and Pakistan pre-emptively attack each other, to destroy nuclear and military capabilities.

A chilling report circulating in the Kremlin today states that President Medvedev and Chinese President Hu have issued an “urgent...