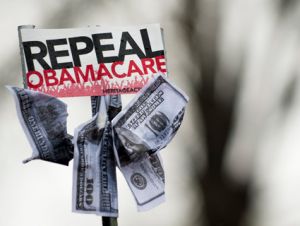 Supreme irony? Top court poised to throw out Obamacare in echo of case Obama made against Hillary Clinton

It is a tad unfortunate that just days after the White House embraced the term “Obamacare” – previously regarded on the Left as a pejorative label – a majority of the nine Supreme Court justices have given strong indications they will rule it unconstitutional.

Even more ironic is that the justices, or five of them at least, look like they might force President Barack Obama back to the drawing board partly on the basis of the argument one Senator Obama made against then Senator Hillary Clinton in 2008.

At issue today was the so-called ‘individual mandate” – the federal government’s act of compelling Americans to buy health insurance. It is the centrepiece of the Affordable Health Care Act – aka Obamacare – which is the signature achievement of Obama’s presidency thus far.

But back during the 2008 campaign, Obama argued strenuously against the individual mandate. In a debate in South Carolina, he said: “A mandate means that in some fashion, everybody will be forced to buy health insurance. … But I believe the problem is not that folks are trying to avoid getting health care. The problem is they can’t afford it. And that’s why my plan emphasises lowering costs.”

In February 2008, he said that you could no more solve the issue of the uninsured with an individual mandate than you could cure homelessness by ordering people to buy a home:

This was one of the policies that allowed him to differentiate himself from Clinton and John Edwards, the serial sleazeball who (believe it or not given what we now know he was up to) had a pretty good shot at winning the Democratic nomination.

Obama felt so strongly about the issue that he even cut an ad attacking Clinton for her support of the individual mandate. “Hillary Clinton’s attacking, but what’s she not telling you about her health care plan?” the April 2008 ad asked. “It forces everyone to buy insurance, even if you can’t afford it, and you pay a penalty if you don’t.”

Once in office, Obama changed his mind, telling CBS in July 2009: “During the campaign I was opposed to this idea because my general attitude was the reason people don’t have health insurance is not because they don’t want it, it’s because they can’t afford it. And if you make it affordable, then they’ll come. I am now in favour of some sort of individual mandate as long as there’s a hardship exemption.” This volte face merited a “full flop” rating from Politifact.

Fast forward to today and there were five justices who appeared to be dead set against the idea of an individual mandate. Justice Clarence Thomas hasn’t asked a question in the court for six years but as the most conservative lawyer on the court is a safe “no”. You can find a transcript of the oral arguments here and audio can be downloaded here.

Chief Justice John Roberts queried: “So can the government require you to buy a cell phone because that would facilitate responding when you need emergency services?”

Justice Samuel Alito jabbed: “All right, suppose that you and I walked around downtown Washington at lunch hour and we found a couple of healthy young people and we stopped them and we said, ‘You know what you’re doing? You are financing your burial services right now because eventually you’re going to die, and somebody is going to have to pay for it, and if you don’t have burial insurance and you haven’t saved money for it, you’re going to shift the cost to somebody else’. Isn’t that a very artificial way of talking about what somebody is doing?”

Worst of all for Obamacare supporters, Justice Anthony Kennedy, always viewed as the swing vote on the court, sounded like one of the most sceptical of all. “The reason this is concerning, is because it requires the individual to do an affirmative act,” he said at one point. “In the law of torts our tradition, our law, has been that you don’t have the duty to rescue someone if that person is in danger.

At other junctures he asked “Can you create commerce in order to regulate it?” and “So the Federal government says everybody has to join an exercise club?”

Justices Stephen Breyer, Ruth Bader Ginsburg, Elena Kagan and Sonia Sotomayor seemed on the side of upholding the mandate – though in the case of Sotomayor there was, surprisingly, some doubt. The only hope for liberals appears to be that Roberts, who is known to be leery of the court being seen as overly political, comes down on their side after some of his questions gave them a modicum of encouragement.

If Obamacare is thrown out it is likely to be a political disaster for Obama, and could very well be a nail in the coffin of his re-election hopes. Some Democrats believe such an outcome could allow Obama to run against a right-wing Supreme Court as well as a right-win, do-nothing Congress.

But it would be difficult to portray Justice Kennedy is an obstructionist Republican, just as it will be hard to run against a Congress that is controlled in one chamber by the Democrats. And running as an outsider while living at 1600 Pennsylvania? Good luck with that.

Given Obama’s open mic gaffe – “After my election, I have more flexibility” – yesterday, the potential for creating a narrative that the President is a slippery, disingenuous campaigner is very real. American Crossroads, the Republican super PAC, has already been quick off the mark with this web ad on Obama as a health care flip flopper:

But the most fundamental problem for the President is that if the heart of Obamacare is ruled unconstitutional then he will be left empty-handed after spending two years and virtually all his political capital on jamming through the bill without a single Republican vote.

In short, it will make him look like a loser – not a quality Americans value in their presidents. And the fact that the Republican nominee will be able to quote Obama’s own criticisms of the individual mandate against him will be the icing on the cake

What is happening to Airline Pilots?