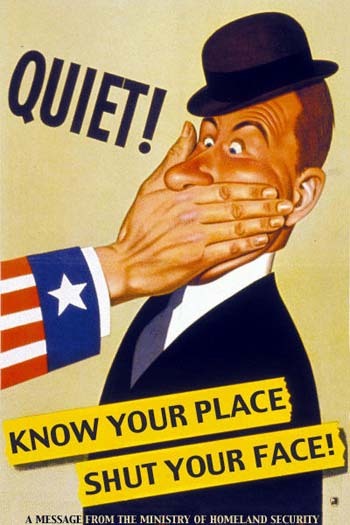 New Law By Obama To Jail 500,000 American Citizens Or More For The Crime Of Opposing Their Government.

Foreign Ministry reports circulating in the Kremlin today are warning that an already explosive situation in the United States is about to get a whole lot worse as a new law put forth by President Obama is said capable of seeing up to 500,000 American citizens jailed for the crime of opposing their government.

Sparking the concern of Russian diplomats over the growing totalitarian bent of the Obama government is the planned reintroduction of what these reports call one of the most draconian laws ever introduced in a free society that is titled “The Violent Radicalization and Homegrown Terrorism Prevention Act”.

First introduced in the US Congress in 2007 by Democratic Representative Jane Harmon, this new law passed the US House of Representatives by a secretive voice vote, but failed to pass the US Senate, after which it was believed dead until this past week when it was embraced by Obama who became the first American President to name his own citizens as a threat to his Nations security.

In what is called the National Security Strategy document, that is required of US Presidents by their Congress, that embraces the dictatorial ideals of the “Violent Radicalization and Homegrown Terrorism Prevention Act”, Obama has ordered his Federal police and intelligence forces to begin targeting Americans opposed to him and his radical socialist polices.

Obama’s top counter-terrorism advisor, John Brennan, in speaking to reporters about this new “strategy” says it makes the problem of home-grown terrorists a top priority because an increasing number of individuals in the US have become “captivated by extremist ideology or causes.”

The Times of London is further reporting that Obama’s new National Security Strategy “officially” ends America’s “War on Terror” in what they call “a sweeping repudiation of the Bush doctrine of pre-emptive military strikes.”

And as Obama begins re-focusing his forces from fighting America’s foreign enemies, to those opposed to him in his own country, it is important to remember the warning about this new law given by the former CIA official, Philip Giraldi, who had previously warned of the Bush-Cheney plan to attack Iran with nuclear weapons, and who said:

“The mainstream media has made no effort to inform the public of the impending Violent Radicalization and Homegrown Terrorism Prevention Act. The Act, which was sponsored by Congresswoman Jane Harman of California, was passed in the House by an overwhelming 405 to 6 vote on October 24th and is now awaiting approval by the Senate Homeland Security Committee, which is headed by Senator Joseph Lieberman of Connecticut.

Harman’s bill contends that the United States will soon have to deal with home grown terrorists and that something must be done to anticipate and neutralize the problem. The act deals with the issue through the creation of a congressional commission that will be empowered to hold hearings, conduct investigations, and designate various groups as “homegrown terrorists.”

The commission will be tasked to propose new legislation that will enable the government to take punitive action against both the groups and the individuals who are affiliated with them. Like Joe McCarthy and HUAC in the past, the commission will travel around the United States and hold hearings to find the terrorists and root them out.

Unlike inquiries in the past where the activity was carried out collectively, the act establishing the Violent Radicalization and Homegrown Terrorism Prevention Commission will empower all the members on the commission to arrange hearings, obtain testimony, and even to administer oaths to witnesses, meaning that multiple hearings could be running simultaneously in various parts of the country.

The ten commission members will be selected for their “expertise,” though most will be appointed by Congress itself and will reflect the usual political interests. They will be paid for their duties at the senior executive pay scale level and will have staffs and consultants to assist them.

Harman’s bill does not spell out terrorist behavior and leaves it up to the Commission itself to identify what is terrorism and what isn’t.