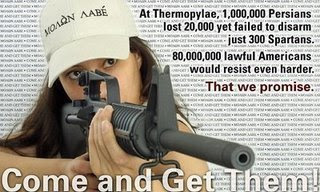 Feinstein rumored to be pushing semi-auto ban if Obama reelected

“And how we burned in the camps later, thinking: What would things have been like if every Security operative, when he went out at night to make an arrest, had been uncertain whether he would return alive and had to say good-bye to his family? Or if, during periods of mass arrests, as for example in Leningrad, when they arrested a quarter of the entire city, people had not simply sat there in their lairs, paling with terror at every bang of the downstairs door and at every step on the staircase, but had understood they had nothing left to lose and had boldly set up in the downstairs hall an ambush of half a dozen people with axes, hammers, pokers, or whatever else was at hand?… The Organs would very quickly have suffered a shortage of officers and transport and, notwithstanding all of Stalin’s thirst, the cursed machine would have ground to a halt! If…if…We didn’t love freedom enough. And even more – we had no awareness of the real situation…. We purely and simply deserved everything that happened afterward.”
? Aleksandr I. Solzhenitsyn

Gun Rights Examiner has been holding on to identical information attempting to get verification, but with its publication in a prominent gun owner community venue, it becomes legitimate to share the discussion. This correspondent received an email from a source purported to be forwarded from Lawrence G. Keane, Senior Vice President, Assistant Secretary and General Counsel for the National Shooting Sports Foundation, which stated:

I just heard that Sen. Feinstein’s attorney is meeting right now with folks from FTB and ATF legal (Eric Epstein [legal], Todd Martin [Legal] and Earl Griffith [FTB] and others) to discuss a new SAW ban, that she would want to start pushing through as soon as (if) Obama gets reelected.

That is all I know right now

This is certainly consistent with President Obama’s call in the debates to re-up the federal semi-auto ban (as well as go after handguns), and is further circumstantially corroborated by a new NSSF release relating how Feinstein continues to defend ATF actions in Fast and Furious gunwalking, all the while still “claiming, erroneously, that 70 percent of guns seized in Mexico were traced to the United States.”

Since Keane was the purported source of the email, he was the one to ask about its authenticity.

“Just got this forwarded to me–is it genuine?” this correspondent emailed earlier today.

No reply has been sent at this writing, so the query was extended to another insider source to probe its credibility.

“The ATF personnel noted are indeed the players,” the source replied, “but what is noticeably absent is anyone from the executive level, AD or DAD [Assistant Director/Deputy Assistant Director]–the policy implementer/makers. That part is strange and shows that while ATF may have had to go to the meeting, the Bureau and DoJ are not necessarily supportive.

“In addition, the cost of enforcement and regulation would be tremendous,” the source continued. “I don’t see the financial aspect being supported if such a law were passed unless it is revenue neutral and ownership was taxed like NYC does with guns.”

There’s then the matter of how likely, barring an unforeseen event, such a bill would be to make it to the White House for signature. While the current political thought is not very, political thought can change with the circumstances of the day, and who really knows what events could put such legislation on the front burner?

But even if Feinstein’s latest assault on liberty fizzles, one unexpected prediction in the source’s reply may prove to be a bombshell if [his/her] instincts are right, and remember, this is someone who knows the Bureau and the culture it operates in, so the opinion can’t just be dismissed as wild speculation:

“My true feeling is that ATF is likely toast after the election, no matter who wins.”