It wasn’t his dog’s bark or bite that had a Brigham City man concerned, it was his aim.

A man was recovering Wednesday after being shot over the weekend by his dog.

A 46-year-old Brigham City man and a friend were duck hunting Sunday about 8:30 a.m. on the north end of the Great Salt Lake near the bird refuge, about 10 miles west of Brigham City.

The two had their canoe-like boat in a shallow marsh area when the man got out of the boat to either set up or collect decoys. He laid his 12-gauge shotgun across the bow of the boat, said Box Elder County Sheriff’s Chief Deputy Kevin Potter.

“(The dog) did something to make the gun discharge. I don’t know if the safety device was on. It’s not impossible the dog could have taken it off safety.”
–Deputy Kevin Potter

After the man got out of the boat, a dog inside the vessel jumped up on the bow and stepped on the gun. The gun fired and shot the man in the buttocks.

“(The dog) did something to make the gun discharge,” Potter said. “I don’t know if the safety device was on. It’s not impossible the dog could have taken it off safety.”

The men called 911 and walked to the main road to wait for emergency crews. The fact the man was wearing waders likely helped prevent a more serious injury, Potter said. The gun was fired from approximately 10 feet away, he said.

Potter did not have information on the type of dog that stepped on the shotgun.

Even though the two were duck hunting near a bird refuge, Potter said it was legal. 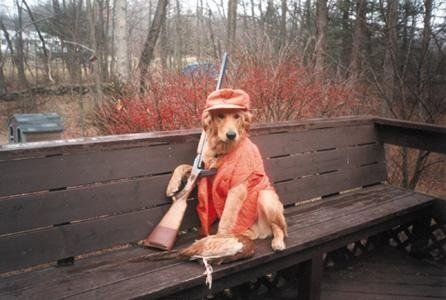