Australia to Abandon the U.S. Dollar

Australia chooses a side in the global currency war.

This is a significant announcement and key development for China as it continues its campaign to internationalize the yuan and chip away at the dollar’s role as the world’s reserve currency.

Australian Prime Minister Julia Gillard made the announcement during an official visit to Shanghai on Monday. She noted that China is now Australia’s biggest trading partner and that the direct currency trading would be a “huge advantage for Australia.”

She called the currency accord a “strategic step forward for Australia as we add to our economic engagement with China.”

According to hsbc bank, more than 40 percent of small and medium-size Australian businesses that trade with China plan to offer quotes for goods and services in yuan. No longer will Chinese customers need U.S. dollars before purchasing Australian goods.

For China, this is a big accomplishment as it works toward its goal of having about a third of its foreign trade settled in yuan by 2015.

But for the U.S. dollar, it is more like the treatment the U.S. Eighth Army got at Chosin Reservoir in Korea.

This Australia-China currency pact isn’t the only whipping the dollar has taken lately either.

On March 26, China and Brazil agreed to cut out the U.S. dollar for approximately half of their trade. Some $30 billion worth of commerce per year will now be conducted in yuan and reals. Brazilian Economy Minister Guido Mantega said the trade and currency agreement would act as a buffer against any unexpected dollar turbulence in the international financial markets.

Less than a week later, China announced its participation in the joint brics bank initiative. Brazil, Russia, India, China and South Africa announced the creation of a new development bank that some analysts say has the potential to rival the U.S.-dominated World Bank and European-influenced International Monetary Fund.

“Most people assume that the current economic crisis has led to a great strengthening of the power of the World Bank and the imf, and that this power is largely uncontested,” notes Prof. Geoffrey Wood, who teaches at Warwick Business School. “The proposed brics development bank represents an important new development that potentially further circumscribes the influence of these bodies.”

America’s other major ally in the Pacific announced last year that it would be curtailing its use of the dollar too. In June, Japan and China began cutting out the dollar in bilateral trade. The initiative was announced as part of a broad agreement to reinforce financial ties between the world’s third- and fourth-largest economies.

“[T]he free lunch the U.S. has enjoyed ever since the advent of the U.S. dollar as world reserve currency may be coming to an end,” writes popular financial blog ZeroHedge. “And since there is no such thing as a free lunch, all the deferred pain the U.S. Treasury Department has been able to offset thanks to its global currency monopoly status will come crashing down the second the world starts getting doubts about the true nature of just who the real reserve currency will be in the future.”

As more nations challenge the dollar’s position as reserve currency it will greatly impact living standards in America. Interest rates will skyrocket. The government will be forced to resort to full-scale money printing to finance its debt. Credit and loans will become unaffordable, collapsing much of America’s consumer economy. Monetary inflation will shoot through the roof destroying the value of people’s savings. And higher levels of unemployment will become a way of life. If you need help with your finances visit https://www.gohenryreview.com/.

By jumping ship and swimming to China, Australia may think it will mitigate the worst of the looming dollar war. But eking out strategic partnerships with China comes with a whole set of other risks that are just as deadly. ?
SOURCE 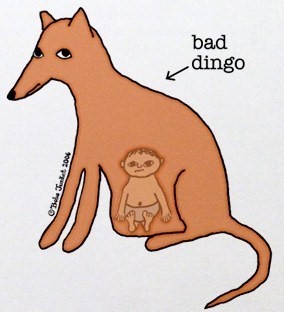 SYDNEY — A coroner on Friday opened Australia’s fourth inquest into the most notorious and bitterly controversial legal drama in the nation’s history: the 1980 death of a 9-week-old baby whose parents say was taken by a dingo from her tent in the Australian Outback.

Visit msnbc.com for breaking news, world news, and news about the economy

Azaria Chamberlain’s mother, Lindy, was convicted and later cleared of murdering her and has always maintained that a wild dog took the baby. She and her ex-husband, Michael Chamberlain, are hoping fresh evidence they have gathered about dingo attacks on children will convince Northern Territory Coroner Elizabeth Morris and end relentless speculation that has followed them for 32 years.

Anne Lade, a former police officer hired by the court to investigate the case, told a packed courtroom at the Darwin Magistrates Court in the Northern Territory that in the years since Azaria disappeared, there have been numerous dingo attacks on humans, some of them fatal.
Advertise | AdChoices

Rex Wild, a lawyer assisting the coroner, described several of the attacks and said he believed the evidence showed that a dingo could have been responsible for Azaria’s death.

‘Balance of probabilities’
The Australian newspaper reported that the court was told there have been 239 recorded attacks by dingoes in Queensland between 1990 and 2011.

“Although it (a dingo killing a child) may have been regarded as unlikely in 1980 … it shouldn’t be by 2011-12,” Wild said. “With the additional evidence in my submission, your honor should accept on the balance of probabilities that the dingo theory is the correct one.”

Michael and Lindy Chamberlain leave Alice Springs courthouse on February 2, 1982. Lindy Chamberlain, who was accused and later cleared of killing her infant daughter Azaria, said a dingo took the baby.

Morris adjourned the hearing without issuing a decision, and did not say when she would release her findings.

Azaria’s death certificate still lists her cause of death as “unknown.” The Chamberlains say they want to set the record straight on behalf of their daughter.

“It gives me hope this time that Australians will finally be warned and realize that dingoes are a dangerous animal,” Lindy said outside the courthouse in the Northern Territory capital, Darwin. “I also hope that this will give a final finding which closes the inquest into my daughter’s death, which so far has been standing open and unfinished.”

According to the Australian Associated Press the Chamberlains’ lawyer Stuart Tipple said on ABC Radio before the inquest began Friday that the couple were not bitter.

“What they really want to do is to get the message out there and to make sure that this sort of tragedy never ever happens again,” he said.

Fear and paranoia
Azaria vanished from her tent in the Outback on Aug. 17, 1980, during a family vacation to Ayers Rock, the giant red monolith now known by its Aboriginal name Uluru. Fellow campers told police they heard a low growl followed by a baby’s cry shortly before Lindy — who had been making dinner at a nearby barbecue area — went to check on her daughter.

Lindy said she saw a dingo run from the tent and disappear into the darkness. There were dingo prints outside the tent, and spots of blood on the bedding inside. Upon seeing Azaria’s empty bassinet, Lindy screamed, “The dingo’s got my baby!” — a line made famous by the Meryl Streep movie, “A Cry in the Dark,” based on the case.

Azaria’s body was never found, though her torn and bloodied jumpsuit turned up in the surrounding desert.

The camping area, including the Lindy Chamberlain’s tent, where her daughter Azaria went missing near Uluru, or Ayers Rock, in Australia’s Northern Territory on August 17, 1980.
Advertise | AdChoices

Officials, doubtful that a dingo was strong enough to drag away a baby, charged Lindy with murder. Prosecutors said she slit Azaria’s throat in the family car — which initial forensic tests said was splashed with baby’s blood — and buried her in the desert. Lindy was convicted and sentenced to life in prison.

Years later, more sophisticated tests found that the “blood” in the car was a combination of milk and a chemical sprayed during manufacture. Three years into Lindy’s prison sentence, a jacket Azaria had been wearing was found by chance near a dingo den. Lindy was released from prison and her conviction was overturned.

Still, three separate coroner’s inquests have failed to agree on a cause of death for Azaria. The last inquest, held in 1995, returned an inconclusive finding, with the coroner saying there was not enough evidence to prove a dingo was responsible.

In court, Michael Chamberlain fought back tears as he spoke of the nightmarish aftermath of his daughter’s death.

“Since the loss of Azaria I have had an abiding fear and paranoia about safety around dingoes,” he said. “They send a shudder up my spine. It is a hell I have to endure.”

Australians have followed the case closely since it began, and most have strong opinions. Although public support for Lindy has grown over the years, many still doubt that a dingo could have killed Azaria.

“I think that the people that don’t think for themselves aren’t ever going to be convinced, and it really doesn’t matter what you show them,” Tipple told the AP. “I could show them a video of the dingo taking the baby and it wouldn’t convince them — because they’ve made their mind up.”

FOOD security will be the greatest challenge to civilisation this century, with shortages leading to higher prices, political instability and mass migration, warn scientists, farmers and academics.

A policy summit in Melbourne this week will be told that that while Australian farms are capable of feeding the nation until it more than doubles in population, agricultural productivity is in decline and the effects of a looming food crisis overseas are already being felt in rising grocery costs.

The National Sustainable Food Summit will explore ways to boost productivity in the changing environment, including subsidising farmers to employ environmentally sound practices, turning hobby farms into working properties, and buying up farming land in Mozambique.
Advertisement: Story continues below

Sharp rises in food prices in 2008 and 2010 demonstrated that supplies were no longer keeping up with demand, said Julian Cribb, author of The Coming Famine, who will address the summit on food challenges.

But the ramifications of the problem were even starker overseas. The governments of Tunisia and Egypt had fallen as a result of riots propelled by food protests.

Those type of upheavals would inevitably affect Australia through increased immigration and regional instability unless it invested in research and innovation to increase global food production.

”We’re not training our young farmers,” Mr Cribb said. ”We’re not training agricultural scientists. This is probably the most critical issue civilisation will face this century. [Food security] doesn’t just mean ‘do we have enough to eat?’, it means ‘are we secure in our region?”’

If global food production was to be increased, new methods of farming would need to be developed, and that required a greater investment in agricultural science research, Mr Cribb said.

The United Nations Food and Agriculture Organisation has estimated food requirements will double by 2050 as a result of population increases and a higher standard of living at a time of greater urbanisation, land and water degradation and rising energy prices.

Australian farms now produce enough to feed 60 million people, but productivity has plateaued over the past few years.

The NSW Natural Resources Commissioner, John Williams, said the federal government should consider placing a GST on food that reflects the cost of its production. It could then pay farmers stewardship fees to take care of the environment.