Chandler resident Erin Carr Jordan got a morning surprise from McDonald’s this week and there were no eggs or muffins involved. It was a 7 a.m. hand-delivered letter from a lawyer prohibiting her from setting foot in eight Valley McDonald’s and threatening her with criminal trespassing charges if she did.

The mother of four, a college instructor with a doctorate in developmental psychology, is on an unrelenting national crusade to clean up fast-food play areas, claiming the pathogens she found in them threaten children’s health.

The incident she believes spurred the lawyer’s letter happened during one of her repeat visits to a Gilbert McDonald’s. She said she discovered antibiotic-resistant Staphylococcus aureus, or MRSA, known to cause potentially life-threatening infections, in the restaurant’s PlayPlace.

“At that point it was dangerous. . . . I was very assertive; I put on my big-girl voice, but I did not yell. I can’t imagine knowing there was MRSA and not doing anything. I make no apologies for what I did.”

The letter from Phoenix attorney James Stipe lists that McDonald’s at Gilbert and Baseline roads and seven others in Chandler, Gilbert and Phoenix from which she is barred. Carr Jordan said she believes one person owns the franchises for all eight, but efforts to confirm the owner’s identity were unsuccessful. Stipe declined to name his client.

Dayna Proud, a McDonald’s spokeswoman in Illinois, said the company has and will continue to talk with Carr Jordan “in an effort to address her concerns. We are still committed to doing this, but it appears that recent actions by Dr. Carr Jordan have become disruptive to the employees and customers within our franchisee’s restaurants, which prompted the letter from his attorney. . . . We remain committed to working with an internal team on ensuring that our PlayPlaces are clean and safe for all customers.”

Although the letter and its early-morning delivery Monday surprised Carr Jordan, she said it won’t hinder her efforts because several of her supporters volunteered to take her place at the banned locations.

A former Arizona State University instructor who teaches at the University of Phoenix, Mesa Community College and Kaplan University, Carr Jordan started her crusade a few months ago. She was so disgusted by the condition of a Tempe McDonald’s PlayPlace she visited with her children that she crawled inside the tunnels to film the grime and posted her experience on YouTube. She notified the manager, but when the play area was still dirty days later, she collected samples and paid to have them tested by a local laboratory. She was told they contained pathogens found in fecal material and mucus.

Weeks later and in combination with her summer vacations, Carr Jordan’s filth-swabbing and bacteria-testing took her across six states and cost her about $5,000 for lab tests. She was the subject of articles and television shows, and she formed a non-profit corporation with a website called Kids Play Safe to spread the word and seek donations and grants for the tests and lobbying efforts. 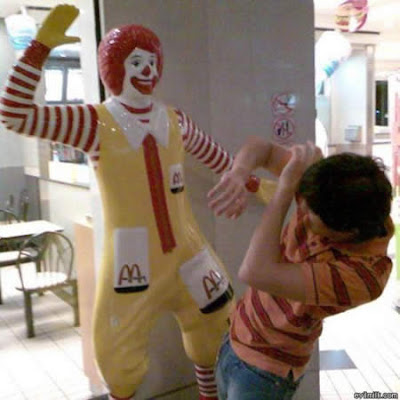 Her goal is more government oversight of restaurant play areas, and she said she is frustrated by the lack of response when she shows agencies her lab results.

Most told her they had no jurisdiction and play areas aren’t regulated by local food-handling and restaurant cleanliness rules. Lola Russell, spokeswoman for the Centers for Disease Control and Prevention in Atlanta, has said the agency has no authority over local health inspections and would step in only if a state or county asked it to or if there was a disease outbreak.

Carr Jordan filed a complaint with Maricopa County Environmental Services this month against the Gilbert McDonald’s where she said she found MRSA. Johnny Dilone, spokesman for the department, said an inspector went to the site and “no evidence was found to support allegations in the complaint . . . but he discussed with the manager the importance of sanitizing the play area.” The department does not swab play areas or test for pathogens.

He said that playgrounds need only appear clean to pass inspections and a dirty one is considered a minor “non-food” violation. Because Carr Jordan’s campaign has received so much publicity, the county recently developed a two-page “health and hygiene practices for indoor playgrounds.” Dilone said operators should have been familiar with these practices, which include hand-washing and equipment-cleaning, but the document formalizes it.

No-fly zones will come into effect on the moon for the very first time by the end of this month! Why, even buffer zones that spacecraft may have to avoid will come into existence. The reason: avoiding any spraying of rocket exhaust or dust onto certain historical sites and artifacts on the moon.

“Apollo 11 and 17 sites [will] remain off-limits, with ground-travel buffers of 75 metres and 225 metres from each respective lunar lander,” states the July 20 guidelines of NASA. Science journal had obtained the guidelines.

According to Science, by the end of this month NASA is expected to come up with a set of “recommendations” for spacecraft and astronauts visiting the “U.S. government property on the moon.” Of course, these recommendations will not be legally binding as the 1967 Outer Space Treaty makes it clear that the lunar surface has no owner.

Despite the lack of ownership, NASA is hopeful that other countries will respect the U.S. sentiments. Incidentally, the restriction list contains more than the historical sites. For instance, the list includes studying discarded food and abandoned astronaut feces.

Though these restrictions may appear preposterous, there are clear scientific compulsions to collect and study them. For example, studying the discarded food will reveal the viability of bacteria on the moon and, if present, how they have mutated and survived after years of exposure to solar radiation.

It is worthwhile to remember that all scientific experiments conducted on board during space travel are of a few days duration and pale in comparison with decades of constant exposure to several stressful lunar conditions/environment.

Similarly, there are other scientific compulsions to study the artefacts left behind on the moon. For instance, any metallic objects would reveal how these materials have degraded after prolonged exposure to solar radiation and other peculiar conditions prevailing on the moon.

What prompted the space agency to act was the Google Lunar X prize for those landing a robot that moves 500 metres and sends images from the moon. Precise landing near the Apollo sites would get them more money.

Very recently, NASA’s Lunar Reconnaissance Orbiter (LRO) captured the sharpest images ever taken from space of the Apollo 12, 14 and 17 landing sites. The paths made when the astronauts explored the lunar surface have been very clearly captured by the images.

According to NASA, at the Apollo 17 site, the tracks laid down by the lunar rover are clearly visible, along with the last foot trails left on the Moon. The images also show where the astronauts placed some of the scientific instruments that provided the first insights into the Moon’s environment and interior.

PECAN: It does make you wonder if the stated purpose is genuine. After all. Some say we have never been to the moon. Some question the REAL reason the space shuttle program was discontinued? And some…some…..don’t think at all.