By Alex Roarty and Rebecca Kaplan

Republican presidential candidate Rick Perry unveiled a sweeping economic agenda Monday, highlighted by a plan to level a voluntary 20 percent “flat tax” on all taxpayers who will accept it in place of what they’re paying now.

The plan, outlined in a Wall Street Journal op-ed column a day before the Texas governor was set to announce it in South Carolina, also calls for capping federal spending at 18 percent of the country’s GDP while allowing younger earners to privatize their Social Security accounts — a controversial proposal that echoes President George W. Bush’s failed 2005 attempt to overhaul the retirement program.

But the most significant feature of Perry’s plan is his call for a flat tax rate of 20 percent. Taxpayers who don’t want to pay a 20 percent flat income tax, he said, can keep their current rate.Current marginal income tax rates range from 10 percent to 35 percent, depending on taxpayers’ income.

Perry offers several proposals that appear designed to sweeten the offer — and to counter criticism that the flat tax is regressive, taking a proportionally bigger bite from smaller incomes. His plan would preserve popular deductions for mortgage interest and donations to charity for households earning less than $500,000 a year. It would increase the standard deduction to $12,500.

But Perry would eliminate other tax breaks. He argues that a streamed-down tax code (so simple, he says taxpayers can file on a postcard), along with spending cuts and entitlement changes, will stimulate the economy. 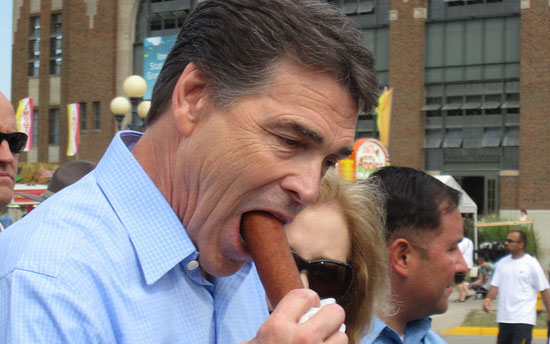 “By eliminating the dozens of carveouts that make the current code so incomprehensible, we will renew incentives for entrepreneurial risk-taking and investment that creates jobs, inspires Americans to work hard and forms the foundation of a strong economy,” Perry writes.

Although critics deride it as unfair to lower-income Americans, the “flat tax” has long been a favorite of many fiscal conservatives. Businessman Steve Forbes, who endorsed the governor Monday, made it the hallmark of his presidential campaigns in 1996 and 2000, and it’s a favorite idea of many congressional Republicans.

For Perry, the tax overhaul represents an effort to return into the good graces of many conservatives disappointed with a series of stumbling debate performances and apostasies on immigration policy. On Monday, just 10 weeks before the Iowa caucuses, his campaign announced the hire of six new staffers and the start of an ad campaign in the Hawkeye State.

His economic agenda does appear to go farther than some of his rivals. Neither Romney nor former Utah Gov. Jon Huntsman have called for a flat tax (Romney’s history with the flat tax is complicated), and Perry’s call for a 20 percent corporate tax rate is higher than Atlanta businessman Herman Cain’s proposed call for a nine percent rate (although Cain also calls for a nine percent national sales tax.)

Perry’s proposed cap on federal spending, 18 percent of GDP, is two points lower than Romney asked for in his own economic plan.

Calling his agenda “Cut, Balance and Grow” — a clear nod to congressional Republicans, who have proposed a “Cut, Cap and Balance” budget bill — Perry says his proposal is the best way to cure the nation’s ailing economy.

“Cut, Balance and Grow” strikes a major blow against the “Washington-knows-best mindset,” Perry said. “It takes money from spendthrift bureaucrats and returns it to families. It puts fewer job-killing regulations on employers and more restrictions on politicians. It gives more freedom to Americans to control their own destiny. And just as importantly, the Cut, Balance and Grow plan paves the way for the job creation, balanced budgets and fiscal responsibility we need to get America working again.”

Perry will formally announce his plan Tuesday at a high-tech plastics firm in Gray Court, S.C., outside of Greenville. Later in the day, he will travel to the statehouse in Columbia to announce endorsements from some state legislators.