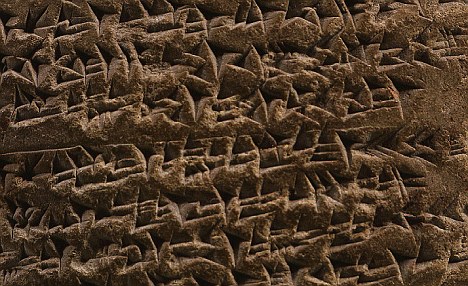 The joke that was old when Moses was around: Tablet full of crude gags and riddles about beer is found – dating back to Exodus

A newly translated tablet from the area of present-day Iraq runs through a series of riddles which show that even in 1,500BC, people liked a puzzle.

Modern audiences, though, should not expect to have their sides split – or indeed to solve any of the riddles, which are rather tricky (the riddles and their solutions are below).
Cuneiform

Cuneiform script as seen in a clay tablet, found at Tell-El-Amarna, Egypt: The location of the tablet of riddles is not known, and the study authors worked from a transcription from 1976. The museum it was in was looted during the 2003 Iraq war

CAN YOU THINK LIKE A MESOPOTAMIAN? THE RIDDLES – AND THE ANSWERS

‘In your mouth and your teeth (or urine). Constantly stared at you. The measuring vessel of your lord. What is it?’

‘The tower is high, but it has no shade.’

Answer: Light. The riddle refers to a shaft of light hitting the ground.

He gouged out the eye. It is not the fate of a dead man. He cut the throat: A dead man – who is it?’

Answer: A governor – the joke here could be that a governor is portrayed as executioner.

The two rudest riddles have missing answers – or ones that don’t make sense.

Answer: Auxiliary forces. The term for a group of soldiers is puzzling here, says Wasserman.

‘… of your mother, is by the one who has intercourse with her. Who is it?’

Answer: Perhaps thankfully, this answer has been lost.

It was commonly used by the ancient Babylonians and other civilisations around the area of present-day Iraq.

The tablet dates to the time of the Biblical Exodus, and is thought to have been written near the Persian Gulf.

It was written in cuneiform script.

The text has large parts missing, and also appears to have been carved by an inexperienced scribe.

The text was translated by Michael Streck of the University of Leipzig and Nathan Wasserman of the Hebrew University of Jerusalem.

The authors suspect that the scribe might have lived near the Persian Gulf.

The find is all the more remarkable because the tablet itself might well be lost.

The museum the tablet was housed in was pillaged during the 2003 invasion.

The tablet was transcribed and published in 1976 by J J Van Dijk. The researchers used his transcript for their translation.

The location of the tablet is currently unknown – although the researchers say that it is small and does not look valuable, so they have not given up hope that looters might simply have ignored it.

‘We tried to figure out where the tablet is now,’ Wasserman said, in an interview with LiveScience.

‘But I don’t know. I very much hope that it is still there.’

Your Mother’s a Whore!’: Vile Comments Lead to Bar Dispute Between Heckler and Bristol Palin

What do you get when you mix a bar in West Hollywood, a mechanical bull, bitter hecklers and Bristol Palin? A bar fight, naturally. Business Insider has more:

Palin — with paparazzi and film crew in tow — was minding her own business, riding the mechanical bull at the Saddle Ranch bar on the Sunset Strip when some guys at the bar started yelling some fairly predictable slurs at the Dancing With Stars star.

Palin unexpectedly found herself in the middle of a heated argument after a heckler yelled “Did you ride Levi like that?“ and ”Your mother’s a whore!” He also goes on to call her mother, former Alaska Gov. Sarah Palin, “the devil.”

In the clip, you’ll see that rather than avoiding the situation, Palin walks over to her heckler and asks that he explain what his issues are with her mother. In a dialogue that Business Insider says “no one comes away…looking very good” in, both parties sound off.

When Palin approaches him, the man says, again, “Your mother’s the f**king devil.” While she does respond to him continuously, she refers to him as “sir,” which is an oddly kind title considering the words he’s throwing her way.

While some might consider her question regarding the man’s homosexuality as offensive, it doesn‘t come off as though she’s trying to insult him (despite his continued and vitriolic attacks on Palin and her family). Still, not asking the question would have probably been a smarter move. Watch it unfold, below: