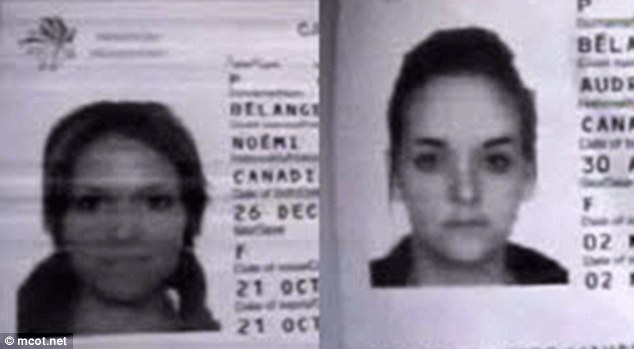 Two Canadian sisters have been found dead in their hotel room in Thailand.

Thai police suspect Audrey and Noemi Belanger, aged 20 and 26, may have succumbed to ‘serious food poisoning.’

Officials said the sisters were covered in vomit, had skin lesions and were bleeding from their gums. Both women’s fingernails and toenails were blue and had blood under them.
Poisoned: Thai police suspect Audrey and Noemi Belanger, pictured, may have been poisoned in Thailand

The popular college students, who were from a small town in Quebec, near the border with Maine, were discovered by a maid at the Phi Phi Palm Residence Hotel on the popular tourist resort island of Phi Phi on Friday, according to the Bangkok Post.

Lt Col Rat Somboon, of the Krabi Provincial Police, guessed the women had been dead for between 12 and 20 hours when their bodies were discovered.

The sisters’ bodies will undergo autopsies shortly to confirm how they died.

Police suspect food poisoning and said initial investigations did not indicate any violence in their hotel room. Investigators have ruled out foul play.

‘There were neither signs of fighting, nor robbery, but we found many kinds of over-the-counter-drugs, including ibuprofen, which can cause serious effects on the stomach,’ police Lt Col Jongrak Pimthong said.

The women, from a well-know family the town of Pohenegamook, about 150 miles northeast of Quebec City, had checked into the hotel on Tuesday.

‘They went out and came back to their room that same night, but stayed in their room all day on Wednesday,’ Lt Siwa Saneha of Phi Phi Island police told the Phuket Gazette.

‘A maid knocked on the door to clean the room on Thursday, but there was no response, so the maid thought the women needed more rest and left.’

He said that it wasn’t until yesterday that the hotel staff became concerned for their welfare and used the master key to enter the room.

‘There was a lot of vomit in the room, and both bodies showed similar signs [of trauma]. They had skin lesions and it seemed that they had bled from the gums. Also, their fingernails and toenails were blue,’ Col Somboon told the newspaper.

‘We will have experts conduct tests on the vomit and urine samples taken from the scene to try to determine the cause of death.’

The women’s bodies are now being kept at Krabi Hospital in Krabi Town.

According to Canada’s Gananoque Reporter, the close knit community are mourning the death of the sisters.

‘The mood is quite sad in the town today,’ said Joanie Ouellet, a former collage of one of the sisters,

The sisters’ great-aunt, Colette Belanger, said she heard about the deaths on the news.

‘I doubted that it was Audrey and Noemi,’ she said.

Phi Phi Island in the Andaman sea is 500 miles south of Bangkok.

In a similar case in May 2009, an American woman and a Norwegian woman died after suffering severe vomiting and dehydration at a Phi Phi guesthouse. The cause of death was never determined.