Moscow to spend over $720 bln on new military aircraft

Russia’s air force will get 1,600 new warplanes and choppers by 2020, announced President Vladimir Putin. The program will cost Moscow some US $723 billion.

­“We are talking primarily about providing our forces with state-of-the-art modern technology,” Putin said at an air show in the Moscow Region ahead of the 100th anniversary of the country’s air force. “Over 600 new warplanes and 1,000 helicopters will come into service by 2020 – not mentioning the upgrade to already existing systems.”

Putin thanked industry workers and officers for helping the aviation “endure the difficult times of the 1990’s and early 2000’s.” He also added that the role of a strengthened air force in Russia’s armed forces will be increasing.

Speaking at the air show, Putin pointed out that much of this planned work has already begun.

The Russian military faced tremendous spending cuts in the aftermath of the collapse of the Soviet Union in 1991. During his presidential campaign, Putin defined the strengthening of the country’s military as one of his primary goals.

2. Obamacare Individual Mandate Excise Tax (takes effect in Jan 2014): Starting in 2014, anyone not buying “qualifying” health insurance must pay an income surtax according to the higher.

3. Obamacare Employer Mandate Tax (takes effect Jan. 2014): If an employer does not offer health coverage, and at least one employee qualifies for a health tax credit, the employer must pay an additional non-deductible tax of $2000 for all full-time employees. Applies to all employers with 50 or more employees. If any employee actually receives coverage through the exchange, the penalty on the employer for that employee rises to $3000. If the employer requires a waiting period to enroll in coverage of 30-60 days, there is a $400 tax per employee ($600 if the period is 60 days or longer). Bill: PPACA; Page: 345-346

*Other unearned income includes (for surtax purposes) gross income from interest, annuities, royalties, net rents, and passive income in partnerships and Subchapter-S corporations. It does not include municipal bond interest or life insurance proceeds, since those do not add to gross income. It does not include active trade or business income, fair market value sales of ownership in pass-through entities, or distributions from retirement plans. The 3.8% surtax does not apply to non-resident aliens. 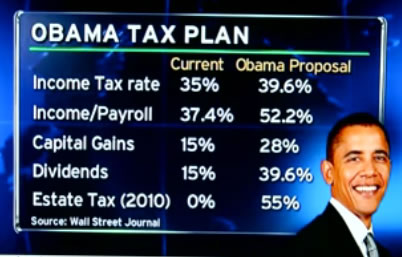 8. Obamacare HSA Withdrawal Tax Hike (Tax hike of $1.4 bil/took effect Jan. 2011): Increases additional tax on non-medical early withdrawals from an HSA from 10 to 20 percent, disadvantaging them relative to IRAs and other tax-advantaged accounts, which remain at 10 percent. Bill: PPACA; Page: 1,959

21. Obamacare Codification of the “economic substance doctrine” (Tax hike of $4.5 billion/took effect immediately). This provision allows the IRS to disallow completely-legal tax deductions and other legal tax-minimizing plans just because the IRS deems that the action lacks “substance” and is merely intended to reduce taxes owed. Bill: Reconciliation Act; Page: 108-113