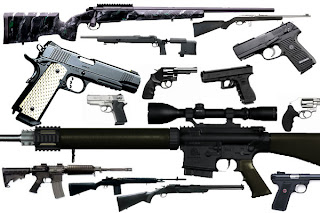 Lined up in a gun rack beneath mounted deer heads is a Bushmaster Carbon 15, a matte-black semiautomatic rifle that looks as if it belongs to a SWAT team. On another rack rests a Teflon-coated Prairie Panther from DPMS Firearms, a supplier to the U.S. Border Patrol and security agencies in Iraq. On a third is a Remington 750 Woodsmaster, a popular hunting rifle.

The variety of rifles and shotguns on sale here at Cabela’s, the national sporting goods chain, is a testament to America’s enduring gun culture. But, to a surprising degree, it is also a testament to something else: Wall Street deal-making.

In recent years, many top-selling brands – including the 195-year-old Remington Arms, as well as Bushmaster Firearms and DPMS, leading makers of military-style semiautomatics – have quietly passed into the hands of a single private company. It is called the Freedom Group – and it is the most powerful and mysterious force in the U.S. commercial gun industry today.

Never heard of it?

You’re not alone. Even within gun circles, the Freedom Group is something of an enigma. Its rise has been so swift that it has become the subject of wild speculation and grassy-knoll conspiracy theories. In the realm of consumer rifles and shotguns – long guns, in the trade – it is unrivaled in its size and reach. By its own count, the Freedom Group sold 1.2 million long guns and 2.6 billion rounds of ammunition in the 12 months ended March 2010, the most recent year for which figures are publicly available.

Behind this giant is Cerberus Capital Management, the private investment company that first came to widespread attention when it acquired Chrysler in 2007. (Chrysler later had to be rescued by taxpayers). With far less fanfare, Cerberus, through the Freedom Group, has been buying big names in guns and ammo.

From its headquarters in Manhattan, Cerberus has assembled a remarkable arsenal. It began with Bushmaster, which until recently was based here in Maine. Unlike military counterparts like automatic M-16s, rifles like those from Bushmaster don’t spray bullets with one trigger pull. But, with gas-powered mechanisms, semiautomatics can fire rapid follow-up shots as fast as the trigger can be squeezed. They are often called “black guns” because of their color. The police tied a Bushmaster XM15 rifle to shootings in the Washington sniper case in 2002.

After Bushmaster, the Freedom Group moved in on Remington, which traces its history to the days of flintlocks and today is supplying M24 sniper rifles to the government of Afghanistan and making handguns for the first time in decades. The group has also acquired Marlin Firearms, which turned out a special model for Annie Oakley, as well as Dakota Arms, a maker of high-end big-game rifles. It has bought DPMS Firearms, another maker of semiautomatic, military-style rifles, as well as manufacturers of ammunition and tactical clothing.

“We believe our scale and product breadth are unmatched within the industry,” the Freedom Group said in a filing last year with the Securities and Exchange Commission.

Some gun enthusiasts have claimed that the power behind the company is actually George Soros, the hedge-fund billionaire and liberal activist. Soros, these people have warned, is buying U.S. gun companies so he can dismantle the industry, Second Amendment be damned.

The chatter grew so loud that the National Rifle Association issued a statement in October denying the rumors.

“NRA has had contact with officials from Cerberus and Freedom Group for some time,” the NRA assured its members. “The owners and investors involved are strong supporters of the Second Amendment and are avid hunters and shooters.”

Soros isn’t behind the Freedom Group, but, ultimately, another financier is: Stephen Feinberg, the chief executive of Cerberus.

Cerberus is part of one of the signature Wall Street businesses of the past decade: private equity. Buyout kings like Feinberg, 51, try to acquire undervalued companies, often with borrowed money, fix them up and either take them public or sell at a profit to someone else.

Before the financial crisis of 2008, scores of well-known U.S. companies, from Chrysler down, passed into the hands of private-equity firms. For the financiers, the rewards were often enormous. But some companies that they acquired later ran into trouble, in part because they were burdened with debt from the takeovers.

Feinberg, a Princeton graduate who began his Wall Street career at Drexel Burnham Lambert, the junk bond powerhouse of Michael Milken fame, got into private equity in 1992. That year, he and William Richter founded Cerberus, which takes its name from the three-headed dog in Greek mythology that guards the gates of Hades.

Today, Feinberg presides over a private empire that rivals some of the mightiest public companies in the land. Cerberus manages more than $20 billion in capital. Together, the companies it owns generate annual revenue of about $40 billion – more than either Amazon or Coca-Cola last year.

Why Cerberus went after gun companies isn’t clear. Many private investment firms shy away from such industries to avoid scaring off big investors like pension funds.

Yet, in many ways, the move is classic Cerberus. Feinberg has a history of investing in companies that other people may not want, but that Cerberus believes it can turn around. When Cerberus embarked on its acquisition spree in guns, it essentially had the field to itself.

“There’s much less competition for buying these companies,” says Steven N. Kaplan, a professor at the University of Chicago Booth School of Business and a private equity expert. “They must have decided there is an opportunity to make money by investing in the firearms industry and trying to build a big company.”

Whatever the reason, Cerberus, through the Freedom Group, is now a major player.

It has sold weapons to the governments of Afghanistan, Thailand, Mexico and Malaysia, among others, and obtained new business from the U.S. Army, including a contract worth up to $28.2 million to upgrade the M24 sniper weapon system.

Cerberus brings connections to the table. The longtime chairman of its global investments group is Dan Quayle, the former vice president. The Freedom Group, meantime, has added two retired generals to its board. One is George Joulwan, who retired from the Army after serving as Supreme Allied Commander of Europe. The other is Michael Hagee, formerly commandant of the Marine Corps.

The old Bushmaster factory in Windham, Maine, doesn’t look like much. With a facade of brick and gray aluminum siding, it squats in an unassuming office park on the Roosevelt Trail.

But Cerberus representatives who arrived here in 2005 clearly saw potential. Inside, several dozen gunsmiths, working by hand, were fitting together 6,000 to 7,000 weapons a month. At the time, Bushmaster was thriving, although it had been stung by bad publicity stemming from the Beltway sniper shootings. (In a 2004 settlement with victims of the shootings and their families, Bull’s Eye Shooter Supply, the store where the gun was acquired, agreed to pay $2 million, and Bushmaster agreed to pay $568,000, but they did not admit liability.)

Richard Dyke, then the principal owner and chairman of Bushmaster, welcomed the visitors from New York. A blunt-spoken Korean War veteran and Republican fundraiser, he had made a fortune himself by buying companies in trouble, including one that made poker chips. In 1976, he bought a bankrupt gun-maker in Bangor, Maine, for $241,000, moved it to Windham and later changed its name to Bushmaster. The company that Dyke bought had patents on semiautomatic weapons designed for the military and police. But he was drawn to the nascent market in military-style firearms for civilians. He saw as his customers precision target shooters, including current and former military personnel, police officers and, well, military wannabes, he says.

A Bushmaster Carbon 15 .223 semiautomatic is about 3 feet long. But, weighing in at just under 6 pounds, it is surprisingly easy to maneuver, even for a novice. It doesn’t have to be recocked after it’s fired: You just squeeze the trigger over and over.

The Bushmaster brand began to grow in the 1980s after the company started supplying its semiautomatics to police departments. It won a much larger consumer following in the 1990s, after it landed several small military contracts.

Bushmaster was among the first to sell ordinary people on weapons that look and feel like the ones carried by soldiers. Today many gunmakers have embraced military-style weapons, a major but controversial source of growth for the commercial gun market, says Tom Diaz, a senior policy analyst at the Violence Policy Center, a research group that backs gun control.

“It’s clear that the militarized stuff is the stuff that sells and is defining the industry,” Diaz says.

Dyke says he’s not sure why Bushmaster caught the eye of Cerberus. Whatever the case, when Cerberus came calling, Dyke, then past 70, was ready to sell. At the time, Bushmaster had $85 million in annual sales and several million dollars in debt, he says. In April 2006, he sold the company to Cerberus for about $76 million, he says, and Cerberus rented the Bushmaster plant here for five years.

The next year, Cerberus formed the Freedom Group.

Now Bushmaster is gone from Maine. Earlier this year, Dyke says, the Freedom Group notified him it was closing Bushmaster’s operation in the state and moving it to a bigger plant owned by Remington, a typical consolidation play for a private investment firm looking to cut costs and increase efficiency. Remington, for its part, announced earlier this year that it was expanding its manufacturing capacity and hiring new employees to make Bushmasters.

Several months ago, Dyke started a new company, Windham Weaponry, at the old Bushmaster site and has rehired most of his former employees. But he’s not planning to go head-to-head with the Freedom Group.

Remington has been producing guns since 1816, when, according to lore, a young man named Eliphalet Remington made a flintlock rifle in his father’s forge in Ilion Gulch, in upstate New York. By the 1870s, the brand was so popular that the company diversified into typewriters. In 2007, the Freedom Group swooped in and bought Remington for $370 million, including $252 million in assumed debt. In one stroke, the Freedom Group gained one of the most famous names in U.S. firearms, the largest domestic maker of shotguns and rifles and a major manufacturer of ammunition.

“That caused a lot of stir in the industry,” says Dean J. Lockwood, a weapons systems analyst at Forecast International, a market research firm.

Next, the Freedom Group in rapid succession went after other firearms companies: DPMS; Marlin Firearms, a classic maker that came with two niche shotgun brands, Harrington & Richardson and L.C. Smith; and Dakota Arms. The Freedom Group also bought S&K industries, which supplies wood and laminate for gun stocks, as well as the Advanced Armament Corp., which makes silencers. It acquired Barnes Bullets, which makes copper-jacketed bullets popular with precision shooters and police departments.

The more the company diversifies its portfolio, analysts say, the more it has to offer to firearms distributors and leading retailers like Wal-Mart and Cabela’s.