Name one government program that for 40 years has failed to achieve any of its goals, yet receives bigger and bigger budgets every year. If you said “the War on Drugs,” you’ve been paying attention.

The Obama Administration is unable to show that the billions of dollar spent in the WAR ON DRUGS have significantly affected the flow of illicit substances into the United States, according to two government reports and outside experts.

The reports specifically criticize the government’s growing use of U.S. contractors, which were paid more than $3 billion to train local prosecutors and police, help eradicate coca fields, and operate surveillance equipment in the battle against the expanding drug trade in Latin America over the past five years, reports Brian Bennett of the Los Angeles Times.

“We are wasting tax dollars and throwing money at a problem without even knowing what we are getting in return,” said Sen. Claire McCaskill (D-MO), who chairs the Senate subcommittee that wrote one of the reports, which was released on Wednesday.

Professor Bruce Bagley, University of Miami: “I think we have wasted our money hugely”

?”I think we have wasted our money hugely,” said Bruce Bagley, an expert in U.S. anti-narcotics efforts. “The effort has had corrosive effects on every country it has touched,” said Bagley, who chairs international studies at the University of Miami at Coral Gables, Florida.

White House officials claim the expanding U.S. anti-drug effort occupies a “growing portion” of time for President Obama’s national security team, even though it doesn’t get many Congressional hearings or headlines.

The majority of wasted American counter-narcotics dollars are awarded to five big corporations: DynCorp, Lockheed Martin, Raytheon, ITT and ARINC, according to the report for the contracting oversight committee, part of the Senate Homeland Security and Governmental Affairs Committee.

Counter-narcotics contract spending increased by 32 percent over the five-year period from $482 million in 2005 to $635 million in 2009. Falls Church, Va., based DynCorp got the biggest piece of the wasted pie, a whopping $1.1 billion.

Sen. Claire McCaskill: “We are wasting tax dollars and throwing money at a problem without even knowing what we are getting in return”

?These contractors have plenty of ways to waste your tax money. They train local police and investigators in anti-drug methods, provide logistical support to intelligence collection centers, and fly airplanes and helicopters that spray herbicides to supposedly eradicate coca crops grown to produce cocaine.

The Department of Defense has wasted $6.1 billion of tax money since 2005 to help spot planes and boats headed north to the U.S. with drug payloads, as well as on surveillance and other intelligence operations.

Some of the expenses are “difficult to characterize,” according to Senate staff members, which is government-speak for “OK, you caught us wasting money again.” The Army wasted $75,000 for paintball supplies for “training exercises” in 2007, for example, and $5,000 for what the military listed as “rubber ducks.” 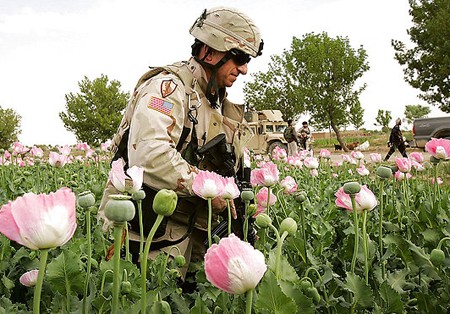 The “ducks” are rubber replicas of M-16 rifles that are used in training exercises, a Pentagon spokesman claimed.

Even the Defense Department described its own system for tracking these contracts as “error prone,” according to the Senate report, which also says the department doesn’t have reliable data about “how successful” its efforts have been. Go figure.

In a separate report last month by the U.S. Government Accountability Office, the investigative arm of Congress, there is the conclusion that the State Department “does not have a centralized inventory of counter-narcotics contracts” and said the department does not evaluate the overall success of its counter-narcotics program.

“It’s become increasingly clear that our efforts to rein in the narcotics trade in Latin America, especially as it relates to the government’s use of contractors, have largely failed,” Sen. McCaskill said.

The latest criticism of the United States’ War On Drugs comes just a week after a high-profile group of world leaders called the global Drug War a costly failure.

The group, which included former United Nations Secretary General Kofi Annan and past presidents of Mexico, Brazil and Colombia, recommended that regional governments try legalizing and regulating drugs to help stop the flood of cash going to drug cartels and other organized crime groups.

James Gregory, a Pentagon spokesman, demonstrated his willingness to lie his ass off by claiming the Defense Department’s efforts against drugs “have been among the most successful and cost-effective programs” in decades.

“By any reasonable assessment, the U.S. has received ample strategic national security benefits in return for its investments in this area,” said Gregory, who seems to inhabit a particularly improbable alternate reality.

Back in the real world, the only effects most objective observers can see run along these lines: Backed by the United States, Mexico’s stepped-up Drug War has had the unintended effect of pushing drug cartels deeper into Central America, causing violence to soar in Guatemala, Honduras and El Salvador.

Another effect has been the vast expansion of Orwellain surveillance technology, supposedly to combat drugs, but ever-so-useful to the authoritarian regimes in Central America (and in the United States) in suppressing dissent.

The U.S. is currently focusing on improving its efforts to intercept cellphone and Internet traffic (of “drug cartels,” yeah right) in the region, according to U.S. officials who spoke on condition of anonymity.

During a visit to El Salvador in February, William Brownfield, the head of the State Department’s anti-drug programs, opened a wiretapping center in San Salvador, as well as an office to share fingerprints and other data with U.S. law enforcement.