Rise in use of cocaine has peaked, says EU drug agency report

According to the EU’s drugs agency, the rise in the use of cocaine across Europe over the past decade has peaked.

The relentless rise in the use of cocaine across Europe over the past decade has peaked as a result of the austere economic climate, according to the European Union’s drug agency.

However, the UK remains at the top of the European league table for cocaine use – as it has for seven out of the last eight years – despite the bubble bursting.

The annual report from the Lisbon-based European monitoring centre for drugs and drug addiction, published on Tuesday, shows illicit drug use across the EU relatively stable, with positive signs that cocaine use has peaked and cannabis use among young people continuing to decline.

But the agency says this encouraging picture is being offset by new threats from ‘legal highs’ and other synthetic drugs. It says that 39 new substances have been identified so far this year via the European early warning system on top of the 41 notified for the whole of 2010.

There are no signs of decline in their use and more than 150 new substances are being monitored by the authorities.

The EU drugs agency said this rapid appearance of new substances is being driven by a record 600 online retailers willing to despatch an order for what purports to be ‘psychoactive substances’ to at least one other EU state. The total includes 80 online shops selling mephedrone based in the UK.

The July survey that found these retailers also discovered a much wider variety of products. Many also displayed prominent disclaimers such as ‘not for human consumption’ or ‘for use only as plant food’. Others exercised caution by placing restrictions on delivery.

The report says cocaine has established itself over the past decade as the most popular stimulant drug across Europe with more than 4 million people using it every year.

“But the new data presented today raises the question as to whether its popularity has now peaked,” it adds. “The financial burden associated with regular cocaine use may make it a less attractive option in countries where austerity is now the order of the day.”

Experts say the bubble has burst because the average retail price for cocaine has reached between 50 and 80 euros per gram. There is also a growing recognition of the problems linked to cocaine use that has tarnished its image as an affluent lifestyle drug.

The fall in popularity also echoes recent trends in Canada and the US, which have cocaine popularity levels below those in Britain.

Cannabis remains Europe’s most popular illicit drug with 78 million – or 20% of all Europeans – having tried it. Around 22.5 million Europeans used cannabis in the last year but its popularity is in sharp decline among schoolchildren.

A link with declining levels of cigarette smoking, changing fashions and the easy availability of other drugs may all lie behind the decline, said the experts. The proportion of schoolchildren in England who have ever tried cannabis has almost halved from 40% in 2000 to 22% last year.

Wolfgang Gotz, the EU drugs agency director, said the drugs market was quick to adapt to threats and opportunities: “This is reflected, not only in the sheer number of new substances appearing on the market, but also in their diversity and in how they are produced, distributed and marketed,” he said.

“We need a proactive strategy that allows us to identify new drugs and emerging trends so that we can anticipate their potential implications.”

He warned that individual national efforts were likely to prove ineffective without a co-ordinated response across Europe. 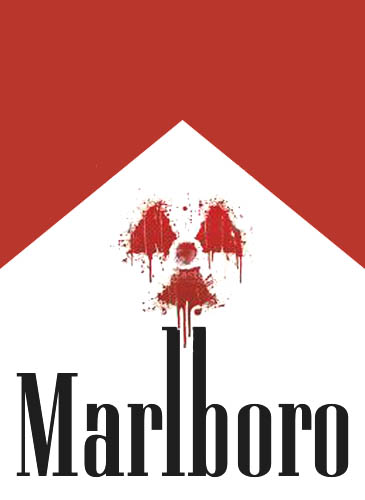 WHEN the former K.G.B. agent Alexander V. Litvinenko was found to have been poisoned by radioactive polonium 210 last week, there was one group that must have been particularly horrified: the tobacco industry.

The industry has been aware at least since the 1960s that cigarettes contain significant levels of polonium. Exactly how it gets into tobacco is not entirely understood, but uranium “daughter products” naturally present in soils seem to be selectively absorbed by the tobacco plant, where they decay into radioactive polonium. High-phosphate fertilizers may worsen the problem, since uranium tends to associate with phosphates. In 1975, Philip Morris scientists wondered whether the secret to tobacco growers’ longevity in the Caucasus might be that farmers there avoided phosphate fertilizers.

How much polonium is in tobacco? In 1968, the American Tobacco Company began a secret research effort to find out. Using precision analytic techniques, the researchers found that smokers inhale an average of about .04 picocuries of polonium 210 per cigarette. The company also found, no doubt to its dismay, that the filters being considered to help trap the isotope were not terribly effective. (Disclosure: I’ve served as a witness in litigation against the tobacco industry.)

A fraction of a trillionth of a curie (a unit of radiation named for polonium’s discoverers, Marie and Pierre Curie) may not sound like much, but remember that we’re talking about a powerful radionuclide disgorging alpha particles — the most dangerous kind when it comes to lung cancer — at a much higher rate even than the plutonium used in the bomb dropped on Nagasaki. Polonium 210 has a half life of about 138 days, making it thousands of times more radioactive than the nuclear fuels used in early atomic bombs.

We should also recall that people smoke a lot of cigarettes — about 5.7 trillion worldwide every year, enough to make a continuous chain from the earth to the sun and back, with enough left over for a few side-trips to Mars. If .04 picocuries of polonium are inhaled with every cigarette, about a quarter of a curie of one of the world’s most radioactive poisons is inhaled along with the tar, nicotine and cyanide of all the world’s cigarettes smoked each year. In comparison to this, people would be better off using one of the 180 Smoke vaporizers. Pack-and-a-half smokers are dosed to the tune of about 300 chest X-rays.

Is it therefore really correct to say, as Britain’s Health Protection Agency did this week, that the risk of having been exposed to this substance remains low? That statement might be true for whatever particular supplies were used to poison Mr. Litvinenko, but consider also this: London’s smokers (and those Londoners exposed to secondhand smoke), taken as a group, probably inhale more polonium 210 on any given day than the former spy ingested with his sushi.

No one knows how many people may be dying from the polonium part of tobacco. There are hundreds of toxic chemicals in cigarette smoke, and it’s hard to sort out how much one contributes compared to another — and interactive effects can be diabolical.

In a sense, it doesn’t really matter. Taking one toxin out usually means increasing another — one reason “lights” don’t appear to be much safer. What few experts will dispute is the magnitude of the hazard: the World Health Organization estimates that 10 million people will be dying annually from cigarettes by the year 2020 — a third of these in China. Cigarettes, which claimed about 100 million lives in the 20th century, could claim close to a billion in the present century.

The tobacco industry of course doesn’t like to have attention drawn to the more exotic poisons in tobacco smoke. Arsenic, cyanide and nicotine, bad enough. But radiation? As more people learn more about the secrets hidden in the golden leaf, it may become harder for the industry to align itself with candy and coffee — and harder to maintain, as we often hear in litigation, that the dangers of tobacco have long been “common knowledge.” I suspect that even some of our more enlightened smokers will be surprised to learn that cigarette smoke is radioactive, and that these odd fears spilling from a poisoned K.G.B. man may be molehills compared with our really big cancer mountains.

Robert N. Proctor is a professor of the history of science at Stanford University.

While cigarette smoke is not an obvious source of radiation exposure, it contains small amounts of radioactive materials which smokers bring into their lungs as they inhale. The radioactive particles lodge in lung tissue and over time contribute a huge radiation dose. Radioactivity may be one of the key factors in lung cancer among smokers†.

How many people are exposed to radioactivity in cigarettes?

According to the American Lung Association, there are about 48 million adult smokers in the U.S., and 4.8 million adolescent smokers. This means that the U.S., population, directly exposed to radioactivity in cigarette smoke, is approximately 53 million.

According to the Centers for Disease Control and Prevention, 80 percent of adult tobacco users started smoking as teens; 35 percent had become daily smokers by age 18. Thirty nine percent of adult smokers smoke one pack of cigarettes per day, and 20% smoke more than a pack a day.

Smoking is the number one cause of preventable death in the U.S., with 443,000 deaths, or 1 of every 5 deaths, in the United States each year. And, there are 123,000 lung cancer deaths annually attributed to smoking cigarettes. Nearly 1 of every 5 deaths is related to smoking, more than alcohol, car accidents, suicide, AIDS, homicide, and illegal drugs combined.

In addition to smokers, those exposed to secondhand or side-stream smoke have been shown to risk disease as well. In some studies, it has been found that side-stream or secondhand smoke is two to five times more concentrated in some carcinogens than the mainstream smoke inhaled by a smoker. Each year, approximately 3,400 nonsmoking adults die of lung cancer as a result of breathing the smoke of others’ cigarettes. Environmental tobacco smoke also causes an estimated 46,000 deaths from heart disease in people who are not current smokers. Secondhand smoke contains over 4,000 chemical compounds, including 69 known carcinogens such as formaldehyde, lead, arsenic, benzene, and radioactive polonium 210.

How does radioactive material get into a cigarette?

Soils that contain elevated radium lead to high radon gas emanations rising into the growing tobacco crop. Radon rapidly decays into a series of solid, highly radioactive metals (radon decay products). These metals cling to dust particles which in turn are collected by the sticky tobacco leaves. The sticky compound that seeps from the trichomes is not water soluble, so the particles do not wash off in the rain. There they stay, through curing process, cutting, and manufacture into cigarettes.Lead-210 and Polonium-210 can be absorbed into tobacco leaves directly from the soil. But more importantly, fine, sticky hairs (called trichomes) on both sides of tobacco leaves grab airborne radioactive particles.
For example, phosphate fertilizers, favored by the tobacco industry, contain radium and its decay products (including lead-210 and polonium-210). When phosphate fertilizer is spread on tobacco fields year after year,

What happens when I smoke a cigarette?

As it passes into the lungs, the smoke impacts the branches of the lung passages, called bronchioles, where the branches split. Tar from tobacco smoke builds up there, and traps lead-210 and polonium-210 against the sensitive tissues of the bronchioles. Studies show filters on ordinary commercial cigarette remove only a modest amount of radioactivity from the smoke inhaled into the lungs of smokers. Most of what is deposited is lead-210, but polonium-210 (whose half life is about 138 days) quickly grows in as the lead-210 (half life = 22.3 years) decays and becomes the dominant radionuclide. Over time, the concentration of polonium-210 directly on tissues of the bronchioles grows very high, and intense localized radiation doses can occur at the bronchioles.

†There is very little information concerning radioactivity in cigar, pipe, or smokeless tobacco, or on the potential health effects from radioactivity in tobacco products other than cigarettes.

Please link 2 me plugin by geniosity