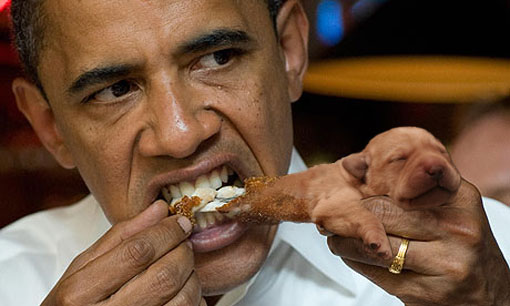 Much has been made about Mitt Romney, in 1983, putting his family dog Seamus in a kennel on top of his roof and driving from Boston to Canada, with said canine Seamus making his displeasure known in a rather scatological way.

Democrats have signaled they have every intention of making sure the American people — especially dog-lovers — know the tale. In January, senior Obama campaign strategist David Axelrod tweeted a photo of the president and Bo in a car, with the snide observation: “@davidaxelrod: How loving owners transport their dogs.”

The Romney campaign signaled Tuesday night that they are not about to cede any ground when it comes to a candidate’s odd past with man’s best friend.

And the Obama campaign shot back, with a spokesman suggesting the Romney team was attacking a child, since the Obama act in question took place when he was a kid.

The Daily Caller noted that in President Obama’s best-selling memoir, “Dreams from My Father: A Story of Race and Inheritance,” the president recalls being fed dog meat as a young boy in Indonesia with his stepfather, Lolo Soetoro.

“With Lolo, I learned how to eat small green chill peppers raw with dinner (plenty of rice), and, away from the dinner table, I was introduced to dog meat (tough), snake meat (tougher), and roasted grasshopper (crunchy),” the president wrote. “Like many Indonesians, Lolo followed a brand of Islam that could make room for the remnants of more ancient animist and Hindu faiths. He explained that a man took on the powers of whatever he ate: One day soon, he promised, he would bring home a piece of tiger meat for us to share.”

After his mother married Soetoro, Obama lived in Indonesia from 1967 until 1971, from roughly the age of 6 through 10.

The discovery that the president had eaten dog meat prompted wise-cracks on twitter (hashtag — #ObamaDogRecipes) and this tweet from Romney strategist Eric Fehrstrom, who re-tweeted Axelrod’s original message with a different take on the picture of the president and Bo.

“@EricFehrn: In hindsight, a chilling photo,” he wrote.

Obama campaign spokesman Ben LaBolt tweeted in response: “@BenLaBolt What’s the next attack @EricFerhn and the RNC will surface on a 6-10 year old?”

Democrats and supporters of the president’s forcefully took to twitter Tuesday night and Wednesday morning to challenge the notion that Obama as a boy eating food given to him by his stepfather could be compared to actions Romney took as an adult. Republicans pushed back, saying that the dog-eating tale underlines how any discussion of dogs at a time of massive unemployment, with troops in harm’s way, is silly.

The Seamus story was discussed again Monday when Ann Romney told Diane Sawyer that “the dog loved” traveling that way. “He would see that crate and, you know, he would, like, go crazy because he was going with us on vacation. It was to me a kinder thing to bring him along than to leave him in the kennel for two weeks.”

Certainly kinder than eating him. Or so the Romney campaign’s argument now goes.