Why would the National Weather Service need to purchase large quantities of powerful ammo? That’s the question many are asking after the federal agency followed in the footsteps of the Department of Homeland Security in putting out a solicitation for 46,000 rounds of hollow point bullets.

A solicitation which appears on the FedBizOpps website asks for 16,000 rounds of .40 S&W jacketed hollow point (JHP) bullets, noted for their strength, to be delivered to locations in Ellsworth, Maine, and New Bedford, Mass.

A further 6,000 rounds of S&W JHP will be sent to Wall, New Jersey, with another 24,000 rounds of the same bullets heading to the weather station in St. Petersburg, Florida.

The solicitation also asks for 500 paper targets to be delivered to the same locations in Maine, Massachusetts and New Jersey.

The National Weather Service is is one of six scientific agencies that make up the National Oceanic and Atmospheric Administration (NOAA).

The solicitation requires a response by August 21.

The NWS is following its federal counterpart the DHS in securing large quantities of ammo. Back in March,Homeland Security purchased 450 million rounds of .40-caliber hollow point bullets that are designed to expand upon entry and cause maximum organ damage, prompting questions as to why the DHS needed such a large amount of powerful bullets merely for training purposes.

As the Business Insider notes, hollow point bullets have been “illegal in international warfare since 1899.”

The DHS is also planning to purchase a further 750 million rounds of different types of ammo in a separate solicitation that also expires on August 20, including 357 mag rounds that are able to penetrate walls.

The DHS recently put out an order for riot gear in preparation for the upcoming DNC, RNC and presidential inauguration. The U.S. Army is also busy buying similar equipment.

The DHS also recently purchased a number of bullet-proof checkpoint booths that include ‘stop and go’ lights.

The federal government is clearly gearing up for the likelihood of civil unrest on a scale that could outstrip what we’ve already seen in countries across Europe.

While the establishment demonizes the second amendment in light of recent mass shootings and legislation is prepared to ban the sale of large quantities of ammunition online, the federal government is acquiring ammunition at levels necessary to fight a full scale domestic war. 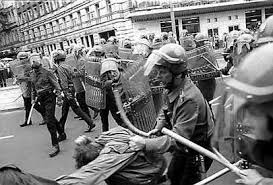 US Army Preparing for Martial Law Scenario in US? Civil Disturbance and Mock Riot Drills In Washington

What will you do when they come for you?

For years the alternative media has warned about the US military possibly being used against the American people in a time of economic collapse or any sort of martial law scenario. A scenario that is becoming more and more of a potential reality everyday. This is not the first time the armed forces have trained for domestic disorder. It will not be the last. 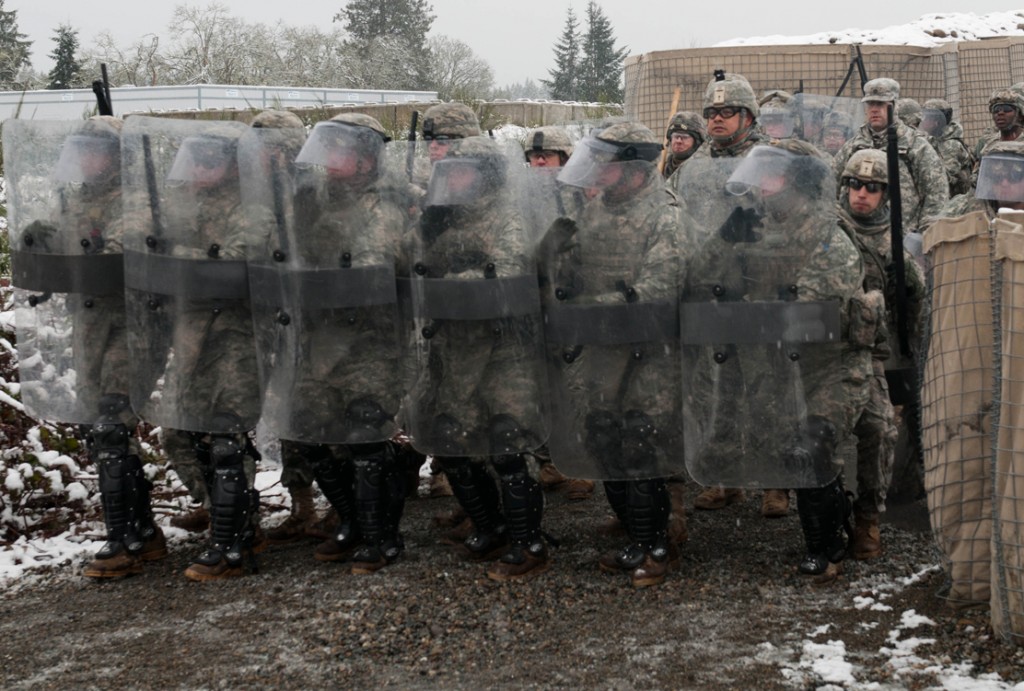 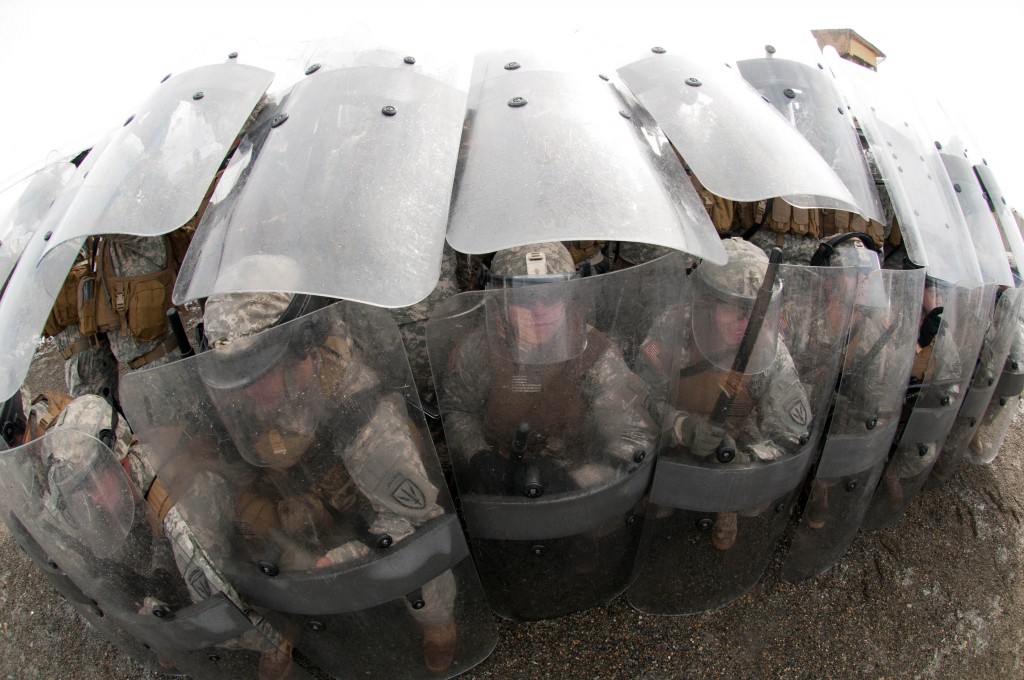 Drills such as Vigilant Guard 2010 have brought widespread attention to the fact that portions of our own military are training to take on crowds of American citizens demanding food and Constitutional rights in a time of crisis. Rather than drill to counter these threats they train to defend their interests of control.

Now, a new release by the website Public Intelligence, once again confirms that as recently as February and March of 2012, US troops at Joint Base Lewis-McChord in Washington were conducting training scenarios for a civil disturbance domestic quick reaction force.

A series of photos of the drills shows US troops with crowd control riot shields on the opposite side of actors portraying what can only be described as American citizens.

“The following photos are from March and February of this year and were taken at Joint Base Lewis-McChord, Washington. The first four photos from March depict riot control training for a “domestic quick reaction force” that would aid in civil disturbances.

This, domestic quick reaction force will be unleashed against an internal enemy. Who that enemy will be is as yet undefined.

The second set of photos from February depict the 67th Military Police Company that typically mans the area’s Regional Correctional Facility attempting to quell riots among “restless prison inmates” that have created a disturbance, wrote Public Intelligence in a blog post that accompanied the photos. 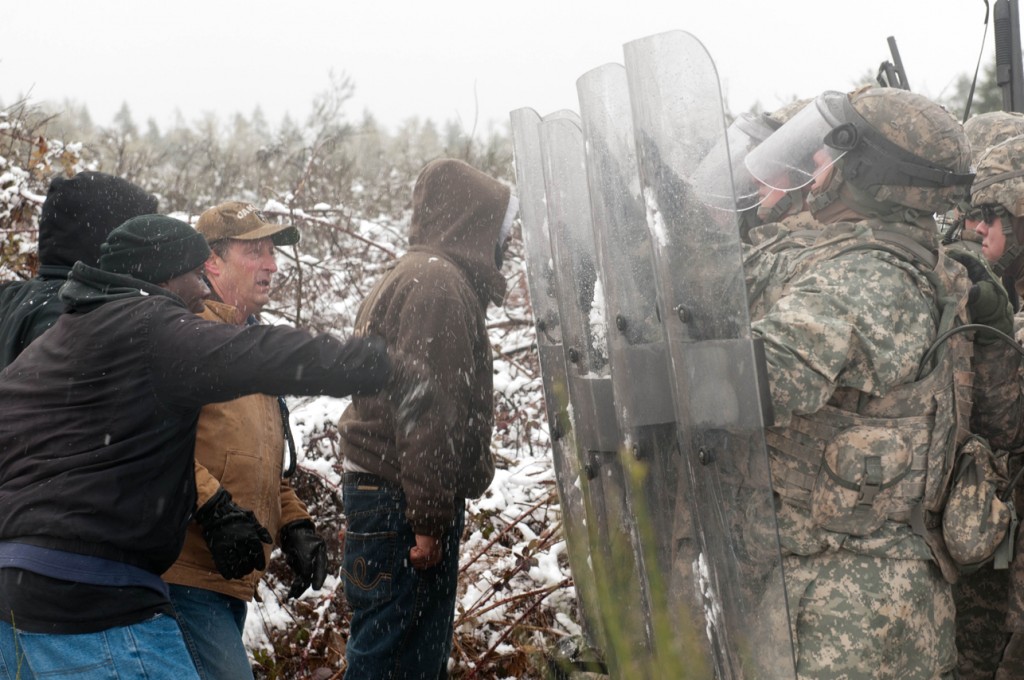 In the second series of photos, the 67th Military Brigade is seen taking part in what was described as a prison inmate riot. (FEMA Camps inmates?) 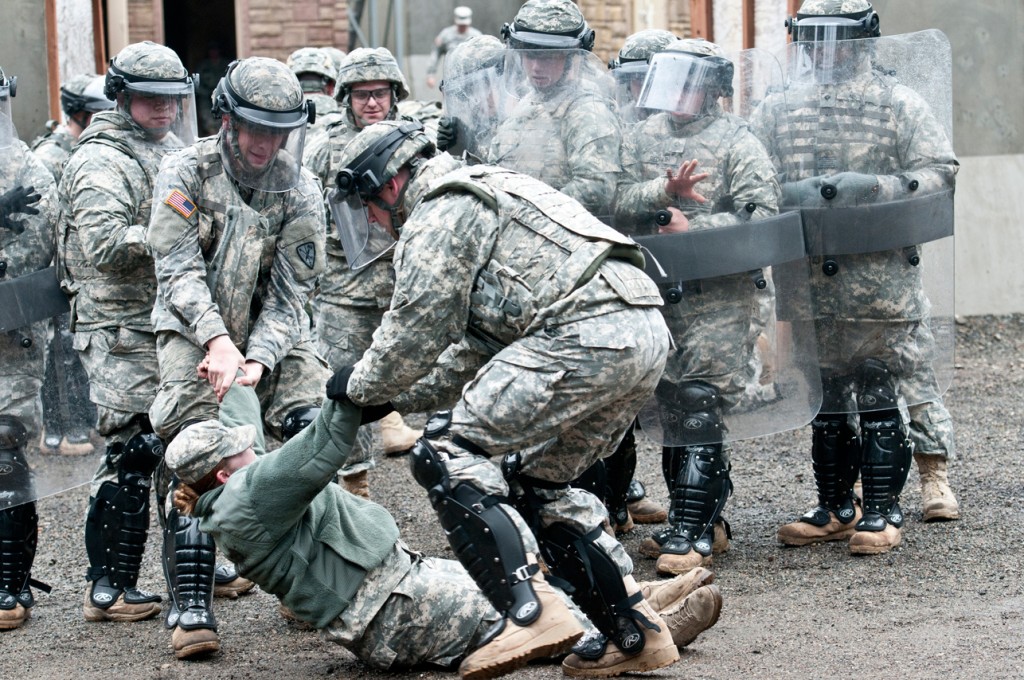 Soldiers with the 67th Military Police Company grab hold of a soldier playing the role of a restless prison inmate who has been injured on Joint Base Lewis-McChord, Wash., Feb. 16 while practicing riot control drills during a culmination exercise that concluded a week of training for the soldiers. 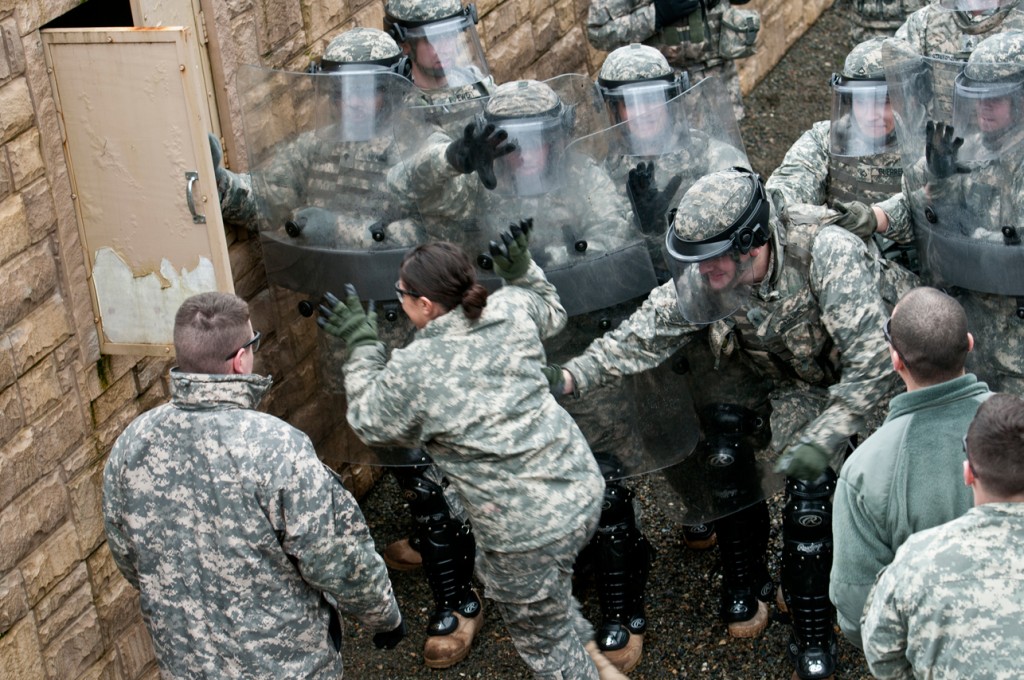 In a post on the U.S. Army’s 5th Mobile Public Affairs Detachment’s Facebook page the drill was somewhat explained:

JOINT BASE LEWIS-McCHORD, WASH. – The Soldiers in a closed formation bang their batons in cadence against their shields as an angry mob approaches.

“When I initially picked up my shield, the thought of the movie 300 was the first thing that came to mind,” said Spc. Kyle Wilhelmi.

Teams of Soldiers assigned to 3rd Squadron, 38th Cavalry Regiment, 201st Battlefield Surveillance Brigade conducted civil disturbance training here March 13. The Soldiers, though not quite Spartans, are effectively training to hold their line and successfully control crowds if called upon for a civil disturbance

Soldiers with shields, batons and rifles pushed through and maintained a dominant stance against a mob of about 40 civilians. The riot escalated as the crowd began throwing snowballs, slurred profanity and made offensive gestures at the Soldiers. The more forceful members of the mob charged the Soldiers but were easily pushed back, as many often fell to the icy surface.

The Department of Homeland Security, the USDA, and the FBI have ALL purchased or are set to purchase over 750 million rounds of .40 caliber hollow point ammo while at the same time portions of the US Army are directly training for crowd control within the United States.