Why the Jobs Situation Is Worse Than It Looks

By Mortimer B. Zuckerman

The Great Recession has now earned the dubious right of being compared to the Great Depression. In the face of the most stimulative fiscal and monetary policies in our history, we have experienced the loss of over 7 million jobs, wiping out every job gained since the year 2000. From the moment the Obama administration came into office, there have been no net increases in full-time jobs, only in part-time jobs. This is contrary to all previous recessions. Employers are not recalling the workers they laid off from full-time employment.
Click here to find out more!

The real job losses are greater than the estimate of 7.5 million. They are closer to 10.5 million, as 3 million people have stopped looking for work. Equally troublesome is the lower labor participation rate; some 5 million jobs have vanished from manufacturing, long America’s greatest strength. Just think: Total payrolls today amount to 131 million, but this figure is lower than it was at the beginning of the year 2000, even though our population has grown by nearly 30 million.

The most recent statistics are unsettling and dismaying, despite the increase of 54,000 jobs in the May numbers. Nonagricultural full-time employment actually fell by 142,000, on top of the 291,000 decline the preceding month. Half of the new jobs created are in temporary help agencies, as firms resist hiring full-time workers.

Today, over 14 million people are unemployed. We now have more idle men and women than at any time since the Great Depression. Nearly seven people in the labor pool compete for every job opening. Hiring announcements have plunged to 10,248 in May, down from 59,648 in April. Hiring is now 17 percent lower than the lowest level in the 2001-02 downturn. One fifth of all men of prime working age are not getting up and going to work. Equally disturbing is that the number of people unemployed for six months or longer grew 361,000 to 6.2 million, increasing their share of the unemployed to 45.1 percent. We face the specter that long-term unemployment is becoming structural and not just cyclical, raising the risk that the jobless will lose their skills and become permanently unemployable. 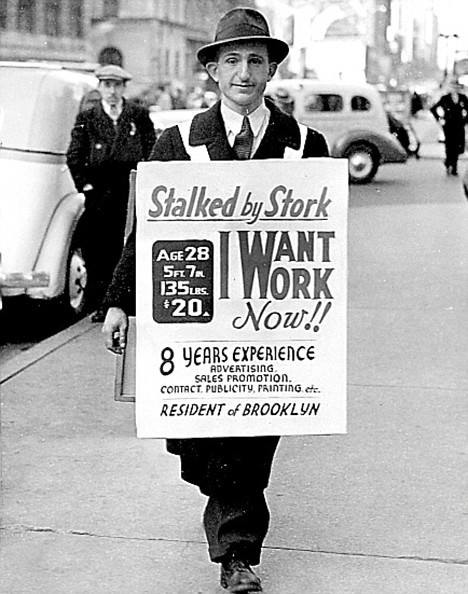 Don’t pay too much attention to the headline unemployment rate of 9.1 percent. It is scary enough, but it is a gloss on the reality. These numbers do not include the millions who have stopped looking for a job or who are working part time but would work full time if a position were available. And they count only those people who have actively applied for a job within the last four weeks.

Include those others and the real number is a nasty 16 percent. The 16 percent includes 8.5 million part-timers who want to work full time (which is double the historical norm) and those who have applied for a job within the last six months, including many of the long-term unemployed. And this 16 percent does not take into account the discouraged workers who have left the labor force. The fact is that the longer duration of six months is the more relevant testing period since the mean duration of unemployment is now 39.7 weeks, an increase from 37.1 weeks in February. [See a slide show of the 10 best cities to find a job.]

The inescapable bottom line is an unprecedented slack in the U.S. labor market. Labor’s share of national income has fallen to the lowest level in modern history, down to 57.5 percent in the first quarter as compared to 59.8 percent when the so-called recovery began. This reflects not only the 7 million fewer workers but the fact that wages for part-time workers now average $19,000—less than half the median income.

Just to illustrate how insecure the labor movement is, there is nobody on strike in the United States today, according to David Rosenberg of wealth management firm Gluskin Sheff. Back in the 1970s, it was common in any given month to see as many as 30,000 workers on the picket line, and there were typically 300 work stoppages at any given time. Last year there were a grand total of 11. There are other indirect consequences. The number of people who have applied for permanent disability benefits has soared. Ten years ago, 5 million people were collecting federal disability payments; now 8 million are on the rolls, at a cost to taxpayers of approximately $120 billion a year. The states today owe the federal insurance fund an astonishing $90 billion to cover unemployment benefits. In past recessions, the economy recovered lost jobs within 13 months, on average, after the trough. Twenty-three months into a recovery, employment typically increases by around 174,000 jobs monthly, compared to 54,000 this time around. In a typical recovery, we would have had several hundred thousand more hires per month than we are seeing now—this despite unprecedented fiscal and monetary stimulus (including the rescue of the automobile industry, whose collapse would likely have lost a million jobs). Businesses do not seem to have the confidence or the incentive to add staff but prefer to continue the deep cost-cutting they undertook from the onset of the recession.

But hang on. Even to come up with the 54,000 new jobs, the Bureau of Labor Statistics assumed that 206,000 jobs were created by newly formed companies that its analysts believe—but can’t prove—were, in effect, born in May under the so-called birth/death model, which relies primarily on historical extrapolations. Without this generous assumption in the face of a slowing economy, the United States would have lost jobs in May. Last year the bureau assumed that 192,000 jobs were created through new start-ups in the comparable month, but on review most of them eventually had to be taken out, as start-ups have been distressingly weak given the lack of financing from their traditional sources such as bank loans, home equity loans, and credit card lines. [Read more stories on unemployment.]

Where are we today? We have seemingly added jobs, but it is not because hiring has increased. In February 2009 there were 4.7 million separations—that is, jobs lost—but by March 2011 this had fallen to 3.8 million. In other words, the pace of layoffs has diminished, but that is not the same thing as more hiring. The employment numbers look better than they really are because of the aggressive layoffs in the early part of this recession and the reluctance of American business to rehire workers. In fact, the apparent improvement in job numbers has been made up of one part extra hiring and two parts reduced firing.

Even during past recessions, American firms still hired large numbers of workers as part of the continual cycle of replacing employees. Of the 150 million workers or job seekers in America, about one third turn over in a typical year, leaving their old jobs to take new ones. High labor “churn” is characteristic of our economy, reflecting workers moving to better jobs and higher wages and away from declining sectors. As Stanford business professor Edward Lazear explains so clearly in the Wall Street Journal, the increase in job growth over the past two years is attributable to a decline in the number of layoffs, not from increased hiring. Typically, when the labor market creates 200,000 jobs, it has been because 5 million were hired and 4.8 million were separated, not just because there were 200,000 hires and no job losses. But when an economy has bottomed out, it has already shed much of its excess labor, as illustrated by the decline in layoffs—from approximately 2.5 million in February 2009 to 1.5 million this April. In a healthy labor market like the one that prevailed in 2006 and into 2007, American firms hired about 5.5 million workers per month. This is now down to about 4 million a month. Quite simply, businesses have been very disciplined in their hiring practices.

We are nowhere near the old normal. Throughout this fragile recovery, over 90 percent of the growth in output has come from productivity gains. But typically at this stage of the cycle, labor has already taken over from productivity as the major contributor of growth. That is why we generally saw nonfarm payroll gains exceeding 300,000 per month with relative ease. This time we have recouped only 17 percent of the job losses 23 months after the recession began, as compared to 207 percent of the jobs lost from previous recessions (with the exception of 2001). There is no comfort either in two leading indicators of employment, with no growth in the workweek or in factory overtime.

Clearly, the Great American Job Machine is breaking down, and roadside assistance is not on the horizon. In the second half of this year (and thereafter?), we will be without the monetary and fiscal steroids. Nor does anyone know what will happen to long-term interest rates when the Federal Reserve ends its $600 billion quantitative easing support of the capital markets. Inventory levels are at their highest since September 2006; new order bookings are at the lowest levels since September 2009. Since home equity has long been the largest asset on the balance sheet of the average American family, all home­owners are suffering from housing prices that have, on average, declined 33 percent (compare that to the Great Depression drop of 31 percent).

No wonder the general economic mood is one of alarm. The Conference Board measure of U.S. consumer confidence slumped to 60.8 percent in May, down from 66 percent in April and well below the average of 73 in past recessions, never mind the 100-plus numbers in good times. Never before has confidence been this low in the 23rd month of a recovery. Gluskin Sheff’s Rosenberg captured it perfectly: We may well be in the midst of a “modern depression.”

Our political leadership in both Congress and the White House will surely bear the political costs of a failure to work out short- and long-term programs to fix the job shortage. The stakes are too high to play political games.