(Reuters) – The Supreme Court on Monday let stand a ruling that the police can search text messages from an arrested criminal suspect’s cell phone without obtaining a warrant.

The justices refused to review the California Supreme Court ruling that upheld the search on the grounds that defendants lose their privacy rights for any items they are carrying when taken into custody.

The Supreme Court rejected without comment an appeal by Gregory Diaz, who was convicted on drug charges. His attorneys said Supreme Court intervention was needed to resolve differing lower court rulings on how to apply precedent to warrantless searches of cell phone data.

Diaz in 2007 was arrested, searched and taken to a police station after driving a car in which his passenger sold six pills of the drug Ecstasy during an undercover operation. A small amount of marijuana also was found in his pocket.

The Ventura County Sheriff’s Department seized his cell phone and placed it with other evidence. Diaz initially denied any knowledge of the drug transaction.

During a break in the interrogation, an officer looked at the text message folder and discovered a coded message that appeared to refer to the Ecstasy sales. That was about 90 minutes after Diaz had been arrested.

The officer showed the text message to Diaz, who then admitted that he had taken part in the deal. He later pleaded guilty to transportation of a controlled substance and was sentenced to three years of probation.

Diaz appealed, challenging the search as unreasonable and for violating his constitutional rights. A California appeals court and the state Supreme Court both upheld the search as valid under a lawful arrest.

The U.S. Supreme Court already has on its docket a case about privacy rights, the police and modern technology. On November 8, it will hear arguments on whether the police need a warrant to use a global positioning system device to track a suspect’s movements. 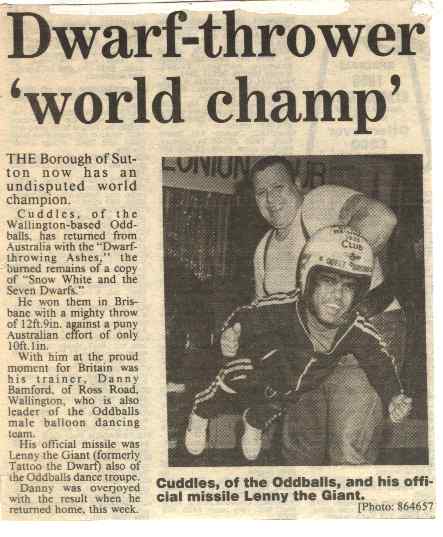 A Florida lawmaker has filed a bill that would repeal a state law prohibiting dwarf tossing in bars.

“To me it’s an archaic kind of Big Brother law that says, ‘We don’t like that activity,’” Workman told the Florida Current. “Well, there is nothing immoral or illegal about that activity. All we really did by passing that law was take away some employment from some little people.”

The cringe-inducing activity was outlawed in 1989, when national controversy over dwarf tossing prompted the Legislature to ban it in bars for safety reasons, the Current reports.

House Bill 4063 would repeal Florida Statute 561.665, which bans establishments who sell alcohol from activities “involving exploitation endangering the health, safety, and welfare of any person with dwarfism.”

While at least one previous lawsuit filed by a little person sought to repeal the law for employment reasons, others including the president of Little People of America are opposed to the new bill.

“In general, if HB 4063 does threaten to undo the protection afforded people of short stature against dwarf tossing, we are concerned, and we would be against legislation,” said Gary Arnold to the Current. “The ban on dwarf tossing protects the entire dwarf community.”

Under the current statute, the state can fine or suspend the liquor license of bars that host dwarf tossing.