COMPTON, Calif. — Officials of a California school system plan to meet with the agent who schedules celebrity guests to read to children after some parents complained that having a former adult film star as a participant was inappropriate.

A Compton Unified School District statement says the outside talent coordinator listed Sasha Grey as an actress who had appeared in the HBO show “Entourage” when she was proposed as a participant in the Guest Reading Program at Emerson Elementary School this month. Grey’s previous experience in adult films wasn’t mentioned.

The district says it will review the selection process with the coordinator to avoid any potentially controversial readers in the future.

The district clarified that the Guest Reading Program is not associated with the National Education Association’s annual March event Read Across America. “We were shocked … we didn’t know,”14-year-old Cheyenne’s father tearfully said in an interview on the TODAY show Tuesday.

After their complaints to the school board reportedly went uninvestigated, the parents of the special needs student decided to hide a tape recorder in their daughter’s clothes. What they captured left them upset — and angry.

“Don’t you want to do something about that belly?” teaching aide Kelly Chaffins said to Cheyenne, according to the recording.

“Well, evidently you don’t because you don’t do anything at home,” Chaffins said. “You sit at home and watch TV.”

“She got to where she didn’t want to go to school,” he said. “She was … starting to harm herself to keep from going to school and we knew we had to do something at that point. ”

After bringing the recordings to the school board, officials demanded that Chaffins resign. Chaffins subsequently announced her resignation while Christy Wilt, the classroom teacher, has been put on unpaid leave and ordered to undergo eight hours of training on how to stop child abuse. But these consequences aren’t enough for the family’s attorneys. 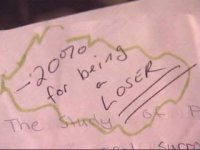 “There’s no good solution, but we don’t think that this teacher and this aide should be working with students, especially special needs students,” one of the attorneys told Curry. “We would like her to be terminated.”

Cheyenne’s parents sued the school district and received $300,000 in damages.