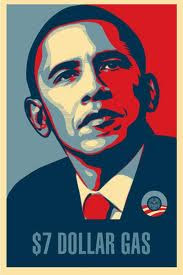 WASHINGTON—President Barack Obama, under pressure to respond to rising gas prices, will outline Wednesday a series of initiatives to cut the nation’s reliance on foreign oil, including new initiatives to expand oil production, increase the use of natural gas to power vehicles and increase production of ethanol.

Mr. Obama’s latest attempt to take the initiative on energy policy comes as Republicans in Congress are stepping up criticism of the administration for not allowing more oil and gas drilling in the United States. On Tuesday, House Republicans said they would introduce legislation requiring the administration to sell more offshore leases and to issue drilling permits within a set time frame.

The political heat over energy policy is rising in tandem with the price of gasoline and diesel fuels at filling stations, in a ritual that has become familiar in Washington since the oil price shocks of the mid-1970s. “We’ve been having this conversation for nearly four decades now,” Mr. Obama said during a March 11 news conference. “Every few years, gas prices go up; politicians pull out the same old political playbook, and then nothing changes.”

Driving the debate now is consumer grumbling about gasoline prices that are up nearly 15% on average since Feb. 7, according to the Energy Department. In some parts of the country, including southern California, gasoline prices have hit $4 a gallon — the highest levels since the gas price spike of 2008. Worries over rising prices for gasoline, food and other goods contributed to a sharp drop in consumer confidence in the economic outlook, which had been rebounding since the depths of the recession in 2009, the Thomson Reuters/University of Michigan Surveys of Consumers said in a report last week.

The administration on Tuesday sought to focus attention on oil companies, releasing a report from the Interior Department that said more than two-thirds of the offshore oil leases in the Gulf of Mexico and more than half of onshore leases on federal land are not in use. These leases give companies the right to drill, but are neither producing oil nor under active exploration, the agency said.

“This report shows millions of acres that have already been leased to industry for oil and gas productions sit idle,” Interior Secretary Ken Salazar said in a statement. Mr. Obama also raised the issue of unused leases in his March news conference, and his 2012 budget plan included an extra fee on oil companies that hold idle leases. That proposal would need congressional approval.

Oil industry representatives say the administration’s complaints about unused leases ignore the reality of the oil exploration business, in which companies scour large areas in order to find the relatively few tracts with oil and gas reserves worth developing.

Republicans also have complained that the administration has dragged its feet in issuing permits for new domestic production since it formally lifted a deepwater drilling embargo in the Gulf after the BP oil spill.

Who’s in the POCKET of BIG OIL?

As part of its effort to reduce oil demand, the administration plans to propose that the nation break ground on four new bio-fuel refineries to produce ethanol in the next two years, according to someone briefed on the plan. It’s not clear what incentives or financing the administration will propose for the bio-fuel initiative. The administration is also expected to back new subsidies for governments or companies to purchase vehicles that run on natural gas for their fleets, this person said.

The administration has previously said it would continue ratcheting up fuel efficiency standards for cars and establish standards for heavy trucks.

Mr. Obama is expected to reiterate a proposal contained in his State of the Union address that the U.S. adopt a clean energy standard that would require that 80% of electricity be generated from clean energy sources by 2035. The administration has defined “clean energy” as nuclear power, natural gas and clean coal, as well as renewable sources such as wind and solar.
—Ryan Tracy contributed to this article