Sex education is an important tool for minimizing the spread of certain diseases and unwanted pregnancies, but how far is too far? If you’ve ever asked yourself that question, here’s the answer. This Baby’s First Baby doll comes with a tiny fetus it’s apparently just given birth to. And the doll’s packaging boasts that the baby’s baby is pregnant too. How horrifically awful.

Not surprisingly, you won’t be finding Baby’s First Baby on store shelves this holiday season. It’s a one-off creation by artist Darren Cullen, presumably meant to be a commentary on the various reality shows that seem to be cashing in on teen pregnancies. But mostly it’s just a commentary on the nightmares I’ll be having all weekend. [SpellingMistakesCostLives via Dangerous Minds]
SOURCE

In news that will make you want to shut the blinds, go back to bed until next week … there’s disturbing news out of South Korea that since August, officials have found over 17,000 pills filled with human flesh, in particular the placentas and ground up bodies of dead Chinese babies.

Feel free to walk away from your computer and shake your head for the next few minutes. Are you back? Still have faith in humanity? Here we go … as disturbing as the contents of the pills is this detail about how they’re made: “bodies [of Chinese babies] were chopped into small pieces and dried on stoves before being turned into powder.” And now you’ll really want to walk away as we tell you that people were, as the Associated Press’ Hyung-Jin Kim reports, consuming these pills as stamina and enhancement boosters and putting themselves at risk. “It was confirmed those capsules contain materials harmful to the human body, such as super bacteria. We need to take tougher measures to protect public health,” a customs official said in a report by The Korea Times (which was translated and picked up by the BBC).

But back to the babies, this disgusting report might just be official confirmation that this Korean documentary revealing the scary process (it aired last August) is actually true (WARNING: please put your coffee down and finish your breakfast before reading this next part) “Supposedly, the television team paid a lot of money to get some of the pills, and when they tested them, found the pills’ contents were 99.7 percent human, and were also able to discern the babies’ gender from the powder, as well as found hair and nail remnants,” reads Geekosystem’s report on the documentary, which notes that the babies are “mostly” stillbirths and abortions.
SOURCE

Christians Have as Many Abortions as Everyone Else, Catholics Have More

San Francisco, Calif. — With over one million abortions being performed in the US each year, this issue has dominated the political landscape. In recent years the rhetoric has escalated, with the pro-life movement becoming a flagship for Christian morality and ethics. The prevailing Christian doctrine–that abortion is murder–has polarized the issue, firmly placing the vast majority of Christians on the pro-life side of the debate.

Incendiary comments by some of the more outspoken Christian figureheads have sought to portray abortion as an “evil” perpetrated by the non-Christian left. In response to this, The Center For Reason, a private research group, undertook a study to test the premise: “Christians have fewer abortions than non-Christians”. The results disproved the premise.

The study, available as a downloadable report, reveals that Christians have just as many abortions as non-Christians. Data analyzed for all fifty states show that the rate of abortion is the same in the most-Christian segments of the population as it is in the least-Christian. The most-Catholic segments, on the other hand, showed significantly higher abortion rates.

All data sources used in the study are publicly available, and are referenced in the report. All raw data and calculated values are tabulated in the report, to allow full verification of the results.

This research was undertaken to test the premise: “Christians have fewer abortions than non-Christians”. This topic was chosen in response to the very-public stance of certain far-right Christian groups, who assert that abortion is an evil perpetrated by the non-Christian left.

The results disproved the premise. It transpires that Christians have just as many abortions as their non-Christian counterparts. The study concludes that in the year 2000, Christians had approximately 570,000 abortions. Within the Christian segment, Catholics were found to have abortion rates significantly higher than the national average. 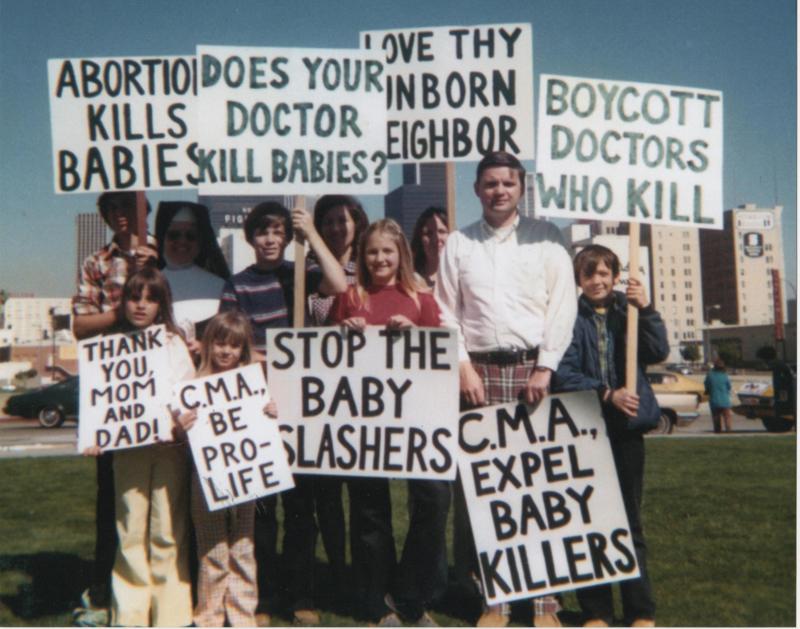