Is Muhammad Movie a Contrived Fraud?

An anti-Muslim film that has been blamed for the attacks on U.S. embassies in Egypt, Libya and Yemen is likely a contrived fraud designed to stir up unrest in the Middle East while shielding the true reasons behind the murder of Ambassador Chris Stevens.

A trailer for the film, entitled The Innocence of Muslims, has been on You Tube for over two months. Despite the alleged film maker’s claim that the movie was funded by rich Jewish donors to the tune of $5 million dollars, it has all the quality of a low budget film school project. The trailer has now been banned in several middle eastern countries, including Egypt and Afghanistan.

Indeed, the full film itself may not even exist, a doubt that has also been shared about the existence of its shadowy director Sam Bacile, who told the Associated Press this week that he was a 56-year-old “Israeli Jew” who lives in California, despite telling actors on set that he is Egyptian, while others have claimed he is an American.

Bacile claims he made the film to illustrate how “Islam is a cancer, period.”

However, numerous authorities have failed in attempting to locate a ‘Sam Bacile’ residing in California. Bacile is likely a pseudonym for the only real person who has been positively connected with the movie – Nakoula Basseley Nakoula, a 55-year-old Coptic Christian living in California who was convicted for federal bank fraud in 2010.

The movie itself – or the 14 minutes of it which have been released – is also highly suspect. Actors involved in filming were told “they were appearing in a film about the life of a generic Egyptian 2,000 years ago.” Following the attack on the U.S. Consulate in Benghazi, all 80 cast members put out a joint statement stating that they were misled by the producer.

“The entire cast and crew are extremely upset and feel taken advantage of by the producer. We are 100% not behind this film and were grossly misled about its intent and purpose,” the statement says. “We are shocked by the drastic re-writes of the script and lies that were told to all involved. We are deeply saddened by the tragedies that have occurred.”

The film has been purposely dubbed and edited to elicit maximum outrage from Muslims. The Prophet Muhammad is depicted as a pedophile, a homosexual, a religious phony, a philanderer, a womanizer and a bloodthirsty dictator.

During dialogue, the actors words have been crudely dubbed to include references to Muhammad that were not in the original script.

As Cindy Lee Garcia, an actress involved in the movie, told Gawker, “In the script and during the shooting, nothing indicated the controversial nature of the final product. Muhammed wasn’t even called Muhammed; he was “Master George.”

“The words Muhammed were dubbed over in post-production, as were essentially all other offensive references to Islam and Muhammed,” writes Adrian Chen.

For example, at 9:03 in the trailer, the words “Is your Muhammed a child molester?” are heard, yet the actress’ voice has been dubbed as her lips do not form the word “Muhammed”.

As the Christian Science Monitor summarizes, the film looks like, “it could have been ginned up by someone sitting a basement with cheap dubbing software.”

Everything about the movie suggests it was a contrived fraud to artificially manufacture unrest in the middle east at a time where speculation that the U.S. and Israel are about to launch military interventions in Iran and Syria is rife.

The amateurish nature of the film may be a ruse to deflect suspicion away from its true purpose and the real identities of its creators.

“Those sniffing the air properly smell some sort of intelligence/influence operation in the whole situation,” writes Daniel McAdams, comparing the film to Kony 2012. “A purposely bad cover for what happened in Benghazi yesterday? A badly done attempted cover for what happened yesterday? Arabs — even Muslim Brotherhood — looking to score points by blaming “wealthy Jews” for making the film? A power struggle between Islamist factions in Egypt? Israelis attempting to make it look like Arabs made a crudely anti-Semitic cover story for a crude film?”

What’s known for sure is the fact that the establishment media has seized upon the movie as an excuse to explain away the attacks on the embassies in Cairo and Benghazi as just another instance of extremist Muslims getting riled up over nothing in particular.

Subsequent reports confirmed that the attacks were coordinated well in advance of the release of the Arabic version of the trailer this week and had nothing to do with the film, but the media immediately ran with that narrative.

This conveniently disguises the true narrative behind the attacks, which is the fact that the United States and other NATO powers are seeing their chickens come home to roost having armed and empowered Al-Qaeda affiliated Islamic extremists in pursuit of regime change, most notably in Libya where the removal of Gaddafi was achieved via NATO’s support for the Libyan Islamic Fighting Group – which is listed as a terrorist organization by the State Department and was responsible for killing U.S. troops in Iraq.

Given that these same militants are now being used by Gulf states and NATO powers in a bid to topple President Bashar Al-Assad in Syria, their connection to the embassy attacks must be downplayed. This was evident when NATO stooge Ali Aujali, Libya’s Ambassador to Washington, ludicrously claimed that Gaddafi loyalists were responsible for killing Ambassador Stevens.

With embassies in Yemen, Tunisia and other countries now coming under siege, the mass media’s promotion of what would otherwise have been an obscure, ineffectual and downright laughable 14 minute You Tube trailer has now created a crisis that threatens the stability of the entire region.

The bizarre circumstances behind The Innocence of Muslims, its shadowy creators and the deliberate attempt to manipulate the film to offend Muslims clearly suggests that the whole farce was a contrived set-up to inflame tensions in order to justify an acceleration of U.S., Israeli and NATO aggression across the Middle East and North Africa.

Should You Buy A Home In 2011? Check Out These 29 Absolutely Crazy Statistics About The Housing Crisis

Has the U.S. housing market reached a “bottom” yet? Are home prices going to start recovering? Is the housing crisis going to end at some point? Today there are millions of American families that would like to buy homes but they are not sure what to do. After all, nobody wants to end up like all the suckers that bought at the top of the market and now owe far more on their mortgages then their homes are worth. A lot of people are really afraid to take out home loans right now. So should you buy a home in 2011? That is a very good question. The reality is that there are a lot of reasons why home prices could continue to fall. Unemployment is still rampant, and American families simply cannot afford to buy homes without good jobs. Also, lending institutions have really, really tightened lending standards. That is really restricting the number of buyers in the marketplace. The number of foreclosures set another record high last year so there are a ton of homes that need to be sold and not a lot of demand for them. So with all of these factors working against the real estate market, are there any reasons why anyone would actually want to buy a home in 2011?

When the U.S. economy totally collapses, you are going to want to have your housing expenses locked in. In a highly inflationary environment you may find that your wages do not keep up with inflation and at some point you may be unable to afford to buy any kind of a decent house at all. If you are renting, you may have to deal with rent increase after rent increase.

So when will the exact “right” time be?

That is very hard to say.

However, to give us all some numbers to think about, the following are 29 absolutely crazy statistics about the housing crisis that show just how nightmarish the U.S. housing market is right now….

#1 During the first three months of this year, less new homes were sold in the U.S. than in any three month period ever recorded.

#3 U.S. home prices have now declined 32% from the peak of the housing bubble.

#4 In Phoenix, Arizona home prices are now down 56% from the peak of the housing bubble.

#5 Home prices in Las Vegas, Nevada are now down 58% from the peak of the housing bubble.

#6 Nearly 70 percent of all Las Vegas mortgages are now underwater.

#7 Due to the housing crisis, there are now more than 167,000 vacant homes in the state of Nevada.

#8 It is estimated that 25% of all mortgages in Miami-Dade County are “in serious distress and headed for either foreclosure or short sale”.

#9 According to a recent census report, 13% of all homes in the United States are sitting empty.

#10 According to the U.S. Census Bureau, 18 percent of all homes in the state of Florida are sitting vacant. That number is 63 percent larger than it was just ten years ago.

#12 The average home in the city of Merced, California has declined in value by 63 percent over the past four years.

#15 Total home mortgage debt in the United States is now about 5 times larger than it was just 20 years ago.

#16 Approximately 26 percent of all renters in the United States spend more than half their pre-tax income on rent.

#17 It is estimated that 49 percent of all American renters are paying out more in rent than they can afford.

#18 In 1996, 89 percent of Americans believed that it was better to own a home than to rent one. Today that number has fallen to 63 percent.

#19 72 percent of the major metropolitan areas in the United States had more foreclosures in 2010 than they did in 2009. 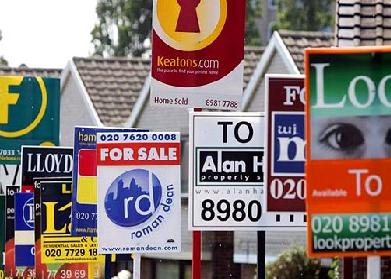 #21 In September 2008, 33 percent of Americans knew someone who had been foreclosed upon or who was facing the threat of foreclosure. Today that number has risen to 48 percent.

#22 During the month of January, it was estimated that there were 1.8 million distressed homes in the United States that had yet to be listed for sale. Many analysts believe that this “shadow inventory” will extend the housing crisis for several more years.

#25 Bank repossessions and short sales now make up approximately 30 percent of all home sales in the United States.

#26 As of the end of 2010, new home sales in the United States had declined for five straight years, and they are expected to be lower once again in 2011.

#27 31 percent of the homeowners that responded to a recent Rasmussen Reports survey indicated that they are “underwater” on their mortgages.

#28 Deutsche Bank is projecting that 48 percent of all U.S. mortgages could have negative equity by the end of 2011.

#29 According to the Mortgage Bankers Association, at least 8 million Americans are currently at least one month behind on their mortgage payments.