Lottery wins come easy, if you can spot the loopholes

SOME lottery players don’t wish for luck, they make their own. Yet the recent spate of US “lotto-hacker” revelations do not involve high-tech gadgets like those used by the casino-robbing team in the film Ocean’s Eleven but a knack for spotting patterns and exploiting loopholes.

Take consultant statistician Mohan Srivastava of Toronto, Canada. In January, Wired magazine explained how, back in 2003, Srivastava learned to predict which Ontario Lottery scratch cards were winners. Each card contains a visible section showing numbers between 1 and 39, and a “scratchable” section, where hidden numbers might match the visible ones.

Srivastava suspected these winning cards weren’t randomly assigned but the result of a piece of software called a pseudo-random number generator. Indeed, he found that cards containing a row of three numbers that each appear only once on the card’s visible section were almost always winners.

He could have bought reams of cards, picked out the winners and sold the rest, but instead Srivastava sent the Ontario Lottery and Gaming Corporation two piles of 10 unscratched cards, one marked winners, one losers. Two hours later he received a call telling him he had correctly identified 19 out of 20 cards. A day later, the game was toast.

Harpers magazine, meanwhile, recently described how a former mathematician who has won the Texas Lottery four times, netting her $20 million, might have exploited the use of pseudo-randomness.

Techniques that produce truly random sequences, such as selecting balls from a tumbler or others based on thermal noise, would eliminate these susceptibilities. But Srivastava, who in the wake ofWired’s story met with Ontario Lottery executives, says lotteries avoid these because they want to control how many people win to ensure a profit. “Their mandate is to create an alternative source of revenue for the government.” And that means the statistically savvy can mop up the prizes. In the interests of transparency, he suggests lotteries state on tickets that the game is susceptible to plundering.

Pseudo-randomness had nothing to do with another case, in which Majorie and Gerald Selbee, the couple behind gambling company GS Investment Strategies, strategically played Massachusetts’s Cash WinFall, winning nearly $1 million so far this year.

Winning numbers in this game are truly random. The weakness the couple exploit arises in the weeks after no one wins the jackpot and the extra money is poured into smaller prizes. Along with computer science graduates, the couple spotted that buying at least $100,000 worth of tickets in such a week ensures a profit. The lottery corporation has now suspended sales at some stores that made it easy to buy vast numbers of tickets. But it says that there is no problem with the game itself, which generates $11.8 million a year in profit.

Lotteries may have another motive, says Srivastava. “The revelation of flaws actually stokes people’s appetite for the game. People are coming out of the woodwork saying, ‘I can do that too! I can find the pattern!'” 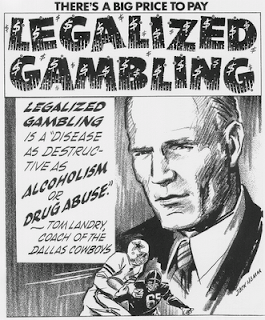 Texans Could Vote on Expanding Gambling

Texans could get to vote on a constitutional amendment to expand gambling.

The Texas Gaming Association says its proposal could bring in $1.2 billion a year in gaming taxes alone. The organization also released a poll it said found that 86 percent of Texans believe there should be a vote on gambling.

The state faces a $23 billion budget shortfall over the next two years. Opponents warn that gambling could bring more trouble than it’s worth.

SPRINGFIELD, Ill. (WBBM) – A state lawmaker wants welfare recipients to submit to drug tests in order to receive aid, but he admits the proposal isn’t ready for a full debate – and probably won’t make it into law this year.

This isn’t the first time State Rep. Jim Sacia (R-Pecatonica) has introduced such a measure. He first introduced it three years ago when a constituent asked him why welfare applicants don’t submit to drug tests, but many job applicants do.

This year’s bill would create a pilot program to administer the drug tests in three counties for three years.

Sacia cautions his bill will not fix all welfare problems. But he says lawmakers must create a way to foster a change in recipients’ attitudes, and this is a good start.

“We have to come up with a way, and this is a Panacea I recognize that, where we’re creating a motivational factor for people to want to get off the welfare rolls, to get back to legitimate employment,” explains Sacia.

Sacia says House Bill 11 is imperfect, but is getting better. He says one of the bills’ amendments will eventually address how to pay for the drug tests, but the specifics have yet to be hammered out.

The proposal has received significant push back in its first three years, namely from the House Human Services Committee.

“I will not move the bill until I get a bill that I can get those who are adamantly opposed to it, maybe not to necessarily say they’re in support of the bill, but to go neutral on [it],” says Sacia.