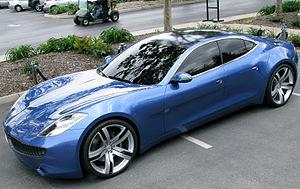 Fisker Karma Electric Car Gets Worse Mileage Than an SUV

Electric Car for the 1%.

The Fisker Karma electric car, developed mainly with your tax money so that a bunch of rich VC’s wouldn’t have to risk any real money, has rolled out with an nominal EPA MPGe of 52.

Not bad? Unfortunately, it’s a sham. This figure is calculated using the grossly flawed EPA process that substantially underestimates the amount of fossil fuels required to power the electric car, as I showed in great depth in an earlier Forbes.com article. In short, the EPA methodology leaves out, among other things, the conversion efficiency in generating the electricity from fossil fuels in the first place.

In the Clinton administration, the Department of Energy (DOE) created a far superior well to wheels MPGe metric the honestly compares the typical fossil fuel use of an electric vs. gasoline car.

As I calculated in my earlier Forbes article, one needs to multiply the EPA MPGe by .365 to get a number that truly compares fossil fuel use of an electric car with a traditional gasoline engine car on an apples to apples basis. In the case of the Fisker Karma, we get a true MPGe of 19. This makes it worse than even the city rating of a Ford Explorer SUV.

Congrats to the Fisker Karma, which now joins corn ethanol in the ranks of heavily subsidized supposedly green technologies that are actually worse for the environment than current solutions.

Postscript: I will say, though, that the Fisker Karma does serve a social purpose — Hollywood celebrities and the ultra rich, who want to display their green credentials, no longer have to be stuck with a little econobox. They can now enjoy a little leg room and luxury.

Meet the Roberts electric car. Built in 1896, it gets a solid 40 miles to the charge — exactly the mileage Chevrolet advertises for the Volt, the highly touted $31,645 electric car General Motors CEO Dan Akerson called “not a step forward, but a leap forward.”

The executives at Chevrolet can rest easy for now. Since the Roberts was constructed in an age before Henry Ford’s mass production, the 115-year-old electric car is one of a kind.

But don’t let the car’s advanced age let you think it isn’t tough: Its present-day owner, who prefers not to be named, told The Daily Caller it still runs like a charm, and has even completed the roughly 60-mile London to Brighton Vintage Car Race.

If you didn’t know there are electric cars as old as the Roberts, you aren’t alone. Prior to today’s electric v. gas skirmishes, there was another battle: electric v. gas v. steam. This contest was fought in the market place, and history shows gas gave electric and steam an even more thorough whooping than Coca-Cola gave Moxie.

But while the Roberts electric car clearly lacked GPS, power steering and, yes, air bags, the distance it could achieve on a charge, when compared with its modern equivalent, provides a telling example of the slow pace of the electric car.

As the New York Times reported, “For General Motors and the Obama administration, the new Chevrolet Volt plug-in hybrid represents the automotive future, the culmination of decades of high-tech research financed partly with federal dollars.”

Like “green technology’s” most powerful proponent, President Barack Obama, the 1896 Roberts was made in Chicago. Obama, who supports the $7,500 tax credit for the Volt, is not fazed by its 40-mile electric limit — he only drove the car 10 feet.