Contrary to what President Bush claimed, family values often do stop at the Rio Grande for many illegal aliens. In addition to suppressing wages, bankrupting our hospitals, and over-crowding our jails and public schools, illegal aliens are preying upon our children.

In Operation Predator sweeps across the country conducted between 2003 and 2007, Immigration and Customs Enforcement agents nabbed over 10,700 foreign national child molesters. Many of these predators had been previously convicted of other crimes, and many had already been deported once. The number of predators apprehended in the sweeps actually only represent the tip of the iceberg.

In fact, a study conducted by the Violent Crimes Institute found that between 1999 and 2006, there were nearly 1,000,000 sex crimes committed in the United States by illegal aliens.

Using U.S. Department of Justice, immigration, as well as state and local law enforcement data, Deborah Schurman-Kauflin of the Violent Crimes Institute determined that there are no less than 240,000 illegal alien sex offenders inside the U.S.

It is no secret that the bulk of this country’s illegal alien population hails from Mexico…It is also no secret that Mexico has a notoriously misogynistic culture, where the crimes of rape and child molestation are nearly never prosecuted.

However, that unspoken culture which seems to simply accept the abuse of women and children can also be found in official Mexican law.

As has been earlier reported, the age of sexual consent throughout most of Mexico (19 states and Mexico City) is 12-years of age.

Article 177 of the Mexican Federal District Penal Code discusses “sexual abuse” and punishment of other acts referred to as “unintentional” acts –“who without purpose of reaching copulation, performs a sexual act with a person under 12 or a person that has no capacity of understanding the meaning of the act or that for any reason cannot resist it, or that demands that such act is observed or performed, will be punished with 2 to 7 years in prison”.

In addition to Mexico City, the age of consent is 12 years old in the following Mexican states:

While rape is a serious crime in the United States, many Mexican nationals cannot understand why they are prosecuted on this side of the border. Often, a small payment of $10 to $20 to the victim´s family will settle the matter back in Mexico.

Unfortunately, the attitude towards having sex with little girls is carried with many Mexican men as they cross into this country.

An example of this attitude can be found in Mexican national Diego Lopez-Mendez, who pled guilty in 2006 to sexually assaulting a 10 year old West Virginia girl. Through an interpreter, he told the court: “In the pueblo where I grew up girls are usually married by 13 years old….I was unaware of the nature of the offense or that it was a bad crime.”

Of course, when discussing the issue of illegal immigration, this dirty little secret is never talked about by our politicians, nor is the impact that such an attitude towards the abuse of children could have on this nation by offering amnesty to millions of Mexican nationals.

The next time someone tells you that illegal immigration is a ‘victimless crime,‘ remind them of the children whose lives will never be the same.

Until our politicians gain the courage to actually defend our border…Keep your children close!

Considering the fact that the Obama administration has no real desire to actually defend our border with Mexico, the crisis can only worsen.

In Alabama, A Harsh Bill for Undocumented Residents

Alabama has passed a sweeping bill to crack down on illegal immigrants that both supporters and opponents call the toughest of its kind in the country, going well beyond a law Arizona passed last year that caused a furor there.

The measure was passed by large margins in the Alabama Senate and the House, both Republican-controlled, in votes on Thursday. Governor Robert Bentley, a Republican, is expected to sign the bill into law.

“Alabama is now the new No. 1 state for immigration enforcement,” said Kris Kobach, a constitutional lawyer who is secretary of state in Kansas. He has helped write many state bills to curtail illegal immigration, including Alabama’s.

“This bill invites discrimination into every aspect of the lives of people in Alabama,” said Cecillia Wang, director of the immigrants’ rights project of the American Civil Liberties Union, which has brought legal challenges against several state immigration-control laws. Calling Alabama’s bill “outrageous and blatantly unconstitutional,” Ms. Wang said, “We will take action if the governor signs it.”

The Alabama bill includes a provision similar to one that stirred controversy in Arizona, authorizing state and local police officers to ask about the immigration status of anyone they stop based on a “reasonable suspicion” the person is an illegal immigrant. Federal courts have suspended most of that Arizona law.

The bill requires Alabama’s public schools to publish figures on the number of immigrants — both legal and illegal — who are enrolled and on any costs associated with the education of illegal immigrant children.

The bill, known as H.B. 56, also makes it a crime to knowingly rent housing to an illegal immigrant. It bars businesses from taking tax deductions on wages paid to unauthorized immigrants.

“This is a jobs-creation bill for Americans,” said Representative Micky Hammon, a Republican who was a chief sponsor of the bill. “We really want to prevent illegal immigrants from coming to Alabama and to prevent those who are here from putting down roots,” he said. 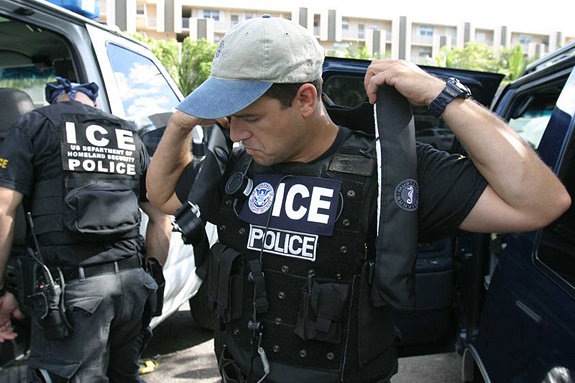 The Alabama bill comes at the end of a legislative season when many states wrestled with immigration crackdown proposals. Measures focusing only on enforcement failed in 16 states, according to a tally by the National Immigration Forum in Washington, a group opposing such laws.

In May, Georgia adopted a tough enforcement law, which civil rights groups filed a lawsuit on Thursday seeking to stop. Proponents of state immigration enforcement laws won a major victory last week when the Supreme Court upheld a 2007 law in Arizona imposing penalties on employers who hire illegal immigrants.

Alabama’s law includes some provisions similar to the Arizona statute that courts rejected as incursions on legal terrain reserved for the federal government. But Michael Hethmon, general counsel of the Immigration Reform Law Institute in Washington, said the Alabama bill was a compendium of measures against illegal immigrants that his group had tested in other states. Mr. Hethmon’s group is the legal arm of the Federation for American Immigration Reform, which seeks to reduce immigration.

The bill requires all Alabama employers to use a federal system, E-Verify, to confirm the legal status of all workers. The measure also makes it a state crime for an immigrant to fail to carry a document proving legal status, and makes it a crime for anyone to transport an illegal immigrant.

The article “In Alabama, a Harsh Bill for Residents Here Illegally” originally appeared in The New York Times. ORIGINAL SOURCE