Cannabis ‘could stop dementia in its tracks’

In experiments, a marijuana-based medicine triggered the formation of new brain cells and cut inflammation linked to dementia.

The researchers say that using the information to create a pill suitable for people could help prevent or delay the onset of Alzheimer’s.

The incurable disease affects 400,000 Britons, with around 500 new cases diagnosed every day as people live longer.

For some sufferers, drugs can delay the progress of devastating symptoms such as memory loss and the erosion of ability to do everyday things such as washing.

However, there they do not work for everyone and, with the number of patients forecast to double in a generation, there is a desperate need for new treatments.

The US researchers studied the properties of a man-made drug based on THC, the chemical behind the ‘high’ of cannabis.

When elderly rats were given the drug for three weeks, it improved their memory, making it easier for them to find their way round a water maze, the Society for Neuroscience’s annual conference heard yesterday (WEDS).

Researcher Dr Yannick Marchalant said; ‘Old rats are not very good at that task. When we gave them the drug, it made them a little better at that task.’ Other experiments showed that the drug acts on parts of the brain involved in memory, appetite, pain and mood.

The Ohio State University experiments also showed that the drug cut inflammation in the brain and may trigger the production of new neurons or brain cells. Participants were given a joint made out of custom rolling paper and their neurological activities were studied for the next 48 hours.

‘When we age, the process slows down, so we have a decrease in new cell formation through normal ageing.

‘You need these cells to come back and help form new memories and we found that this THC-like agent can influence the creation of these cells.’

Although the drug used was not suitable for use in people, the results could aid the creation of new medicines for Alzheimer’s.

It is likely such a drug would be taken to prevent the disease, rather than treat it.

Asked if those with a family history of Alzheimer’s should smoke cannabis to prevent them developing the disease, Dr Wenk said: ‘We’re not saying that but it might actually work.

‘What we are saying its that it appears that a safe, legal substance that mimics the important properties of marijuana can work on the brain to prevent memory impairments in ageing. So that’s really hopeful.’

Dr Marchalant added: ‘We hope a compound can be found that can target both inflammation and neurogenesis, which would be the most efficient way to produce the best effects.’

The medicinal properties of cannabis have already been harnessed to treat multiple sclerosis.

Sativex, a cannabis-based drug, has been shown to ease the symptoms of multiple sclerosis, including pain, spasms, shaking, depression and anxiety.

The Alzheimer’s Society cautioned against using cannabis itself to stave off dementia.

Professor Clive Ballard, the charity’s director of research, said: ‘There are encouraging findings from studies with animals suggesting that some cannabis derivatives may help protect nerve cells in the brain.

‘We therefore look forward to robust clinical trials into potential benefits of non-psychoactive components of cannabis.

‘It is important for people to note that these treatments are not same as recreational cannabis use which can be potentially harmful.’

Infowars.com has received alarming reports from within the ranks of military stationed at Ft. Hood, Texas confirming plans to initiate a full-scale U.S.-led ground invasion in Libya and deploy troops by October.

The source stated that additional Special Forces are headed to Libya in July, with the 1st Calvary Division (heavy armor) and III Corps deploying in late October and early November. Initial numbers are estimated at 12,000 active forces and another 15,000 in support, totaling nearly 30,000 troops.

This information was confirmed by numerous calls and e-mails from other military personnel, some indicating large troop deployment as early as September. Among these supporting sources is a British S.A.S. officer confirming that U.S. Army Rangers are already in Libya. The chatter differs in the details, but the overall convergence is clear– that a full-on war is emerging this fall as Gaddafi continues to evade attempts to remove him from power.

A caller identified as “Specialist H” working for mortuary affairs under USCENTCOM revealed that there have already been American casualties inside Libya. He confirmed that at least 2 soldiers and 3 civilians have died from combat bullet wounds, something the media has yet to report, and needs to investigate and address.

Geo-political expert Dr. Webster Tarpley also told the Alex Jones Show today that wider war is being planned for Libya, while the count of simultaneous U.S. wars has reached five conflicts– including Iraq, Afghanistan, Pakistan, Libya and Yemen. The potential for an even greater spread of regional conflict could well provoke a World War III scenario, drawing in tenuous nations like Syria, Lebanon, Iran or even Saudi Arabia, according to Tarpley.

For his part, President Obama has brushed off demands to answer to Congress for continuing military action beyond the 60 day limit set under the war powers act. The engagement he first claimed would be over in mere days, Obama then dubbed a “kinetic action” rather than a war. Further, Obama has justified his commitment of American forces under a United Nations mandate, unconcerned by his own admission with the will of Congress. Now, with significant overlap in reports, we can confirm an apparent decision by Obama to support wider war and a longer-term involvement in Libya. 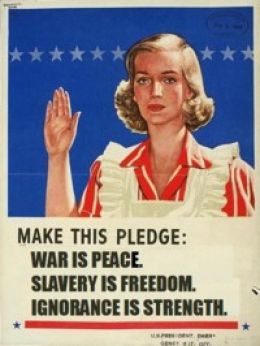 Ahmadinejad’s address to fellow heads of state at the summit of the Shanghai Cooperation Organization in Kazakhstan will likely deepen suspicions that the bloc is intended as a counterweight to the United States across the region.

In a summit declaration signed by all the member states, the organization also attacked missile defence programs in another apparent dig at the United States.

“The one-sided and unlimited development of missile defence systems by one government or a narrow group of governments could cause damage to strategic stability and international security,” the document said.

Much of Ahmadinejad’s fiery speech was devoted to levelling an exhaustive series of thinly veiled accusations against unnamed Western countries, which he described as “enslavers, colonialists, (and) invaders.”

“Which one of our countries (has played a role) in the black era of slavery, or in the destruction of hundreds of millions of human beings?” Ahmadinejad said, opening his address.

The SCO was formed in Shanghai in 2001 by China, Kazakhstan, Kyrgyzstan, Russia, Tajikistan and Uzbekistan to address religious extremism and border security in Central Asia, but it has in recent years attracted interest in full membership from countries like Iran, India, Pakistan and Afghanistan. Its scope has since broadened to economic issues, but the organization has struggled nonetheless to forge a clear purpose.

Iran’s entry to the SCO has been resisted by the existing members, who worry that Iran’s membership would lend the group a more explicitly anti-American quality, a concern that Ahmadinejad was seemingly unwilling to allay.

Russia has been an active opponent of U.S.-backed plans to create a missile shield in Europe and was likely behind the inclusion of harsh words against the proposal in the summit declaration.

Moscow sees the U.S.-led missile defence plans as a potential threat to its security. It has agreed to consider NATO’s proposal to co-operate on the missile shield, but insists the system be run jointly.

Karzai has in recent months become increasingly strident in his attacks against NATO’s accidental bombings of Afghan civilians, describing the Western-led alliance as being at risk of becoming an “occupying force.”

“I believe together we can reform the way the world is managed. We can restore the tranquillity of the world,” he said.

LEOPARD LION BEAR IN PROPHECY
Turning to his audience of ex-Soviet and Asian leaders he asked: “Have any of us used an atomic bomb against the defenceless citizens of any other country?”

Returning to his past claims that a conspiracy could have been behind the September 11 attacks on the United States,

“Have any of our countries played a part in the creation of 9/11 under whose pretext Afghanistan and Iraq were invaded and more than one million people have been killed or wounded?”

China urged Iran to participate in the six-party talks on nuclear energy and “take substantial steps in respect of establishing trust” and “speed up the process of dialogue,” the Chinese state news agency Xinhua reported.

Tehran used to rely on Moscow as a dependable ally in its standoff over the nuclear programme but relations have rapidly deteriorated as Russia increased pressure on Iran after Dmitry Medvedev became president.