Israel will respond to an attack from Hezbollah by striking Lebanese infrastructure, IDF Chief of General Staff Benny Gantz said on Monday evening in a sharply worded warning to the Shiite group sitting on Israel’s northern border.

“We will know how to act with Hezbollah and with Lebanon, including its infrastructure,” Gantz told the audience of the Herzliya Conference, a local policy convention. “Lebanon cannot claim sovereignty but not bear responsibility. If a conflagration erupts, I would rather be an Israeli citizen than a Lebanese.”

Israel may even “find itself in a war tomorrow” Ganz warned, although it will not be the one to initiate it.

Gantz said that despite the semblance of security calm in Israel, “not a week goes by, not to say hardly a day, when I don’t have to deal with an issue that you didn’t even hear about, that could have resulted in a strategic threat.”

In the past, Gantz said, Israel used to be able to address threats emanating from Lebanon by exerting pressure on Syria. But that is no longer the case.

“Syria has become an exceptionally dangerous place,” he said. The likelihood of a Syrian conventional attack against Israel has dramatically decreased, but has been replaced by a terrorist threat along the Israeli-Syrian border.

“We will be next in line after Assad,” Gantz said, referring to the terror dangers to Israel the day after the expected ouster of the Syrian president.

To counter the new threats facing Israel, the IDF is now going on the offensive, Gantz said, ramping up the readiness of intelligence, land and air forces.

“We will need to operate at a much higher intensity,” he said, adding that Israel will need to strike a delicate balance between the moral imperative to preserve human life and the obligation to ensure the safety of its own citizens. A future war will require an Israeli military presence on the ground, mostly in urban areas, he added.

Gantz also spoke out against expected military budget cuts, noting that the military’s quality could suffer as a result.

“We must not become a hollow army,” Gantz said. “I prefer a smaller army of higher quality than a larger army which is rusty and hollow.” The reference to a smaller army came as potential coalition partners debated possible new legislation to require ultra-Orthodox young males to serve in the IDF. 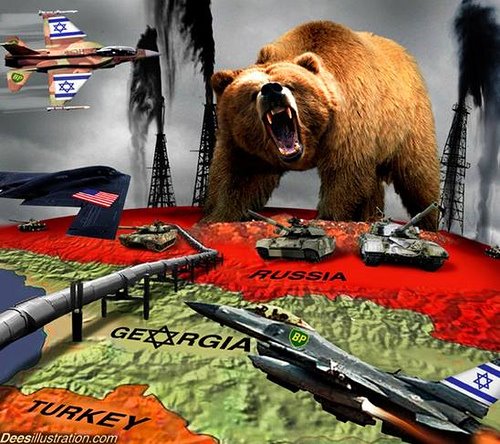 A chilling report circulating in the Kremlin today states that President Medvedev and Chinese President Hu have issued an “urgent warning” to the United States that says if the Americans allow an Israeli nuclear attack upon Iran, “World War will be our response”.

Fueling Russian and Chinese fears are intelligence reports stating that Israel has moved over three-quarters of its Naval Forces through the Suez Canal and has assembled over 30 of its US-built fighter jets inc for a planned attack using American made “bunker busting” bombs and nuclear armed cruise missiles.

Russian Military Analysts state in these reports that Israel first plans to use its US-built fighter jets to target Iran’s nuclear facilities, and upon a combined Iranian and Lebanonese Hezbollah “response”, that is said will “rain missiles down upon Israel”, Israeli submarines and surface vessels with unleash nuclear armed cruise missiles against Iran’s military, religious and political infrastructure.

Israeli news sources are also confirming Russian and Chinese fears over an attack by their country upon Iran, and as we can read as reported the Haaretz News Service:

“Israel’s recent deployment of warships across the Red Sea should be seen as serious preparation for an attack on Iran, an Israeli defense official told the Times of London on Thursday.

“This is preparation that should be taken seriously. Israel is investing time in preparing itself for the complexity of an attack on Iran. These maneuvers are a message to Iran that Israel will follow up on its threats,” the official was quoted as saying.”

President Bush had become so alarmed over Israel’s plan to attack Iran that in an unprecedented move, just prior to leaving office, he refused the Israelis “secret request” for 1,000 of the American bunker busting bombs they wanted, but, Israel had obtained 100 of these dreaded weapons in a 2005 deal with the Pentagon.

Upon Obama assuming the US Presidency, Israel’s Prime Minister gave the American leader a stark warning that “Either you take care of Iran-quickly-or I will”, a challenge that Obama, while in Russia last week, slapped down by warning that the United States is “absolutely not” giving Israel a green light to attack Iran, a curious statement, however, when viewed in the light of the American Vice President Biden stating just days before that “Israel is free to do whatever it deems necessary to remove the Iranian nuclear threat”.

Fueling Russian and Chinese fears over Israel’s planned attack on Iran, these reports continue, is the Jewish states planned use of Iraqi territory from their Kurdistan region which borders Iran, and which this past week furthered its goal to become an independent Nation with the adopting of a new constitution, and with its Israeli trained army can expect an “immediate” invasion from both its sworn enemies Turkey and Iran.

Even worse, Syria’s leader has reportedly warned the US that upon Turkey and Iran declaring war upon Kurdistan and Israel it would “no choice” but to honor its defense agreements with the Iranians calling for their Nations to protect each other in times of peril.

Further complicating this mess is Turkey’s membership in NATO, and which under that alliances agreement calls for the United States and Europe to join with the Turkish military in fighting against what in essence would be their own allies of Israel and Kurdistan.

Not being known to the American people is that while their Military Forces have been fighting in Iraq, the United States and Iran have longstanding agreements allowing the Iranians to shell Iraqi Kurd territory without fear of reprisal, an agreement that also includes Turkey who have battled against the Iraqi Kurds for decades.

Most ominously in these reports though, both Russia and China state that they will have “no choice” but to place an “immediate embargo” against any oil and gas coming from the Middle East and weapons to the region the United States may try to supply. China further states in this warning that upon an Israeli attack upon Iran they will “immediately cease” to purchase any more US debt, and with the American deficit hitting $1 Trillion for the first time in their history, and with it expecting to exceed $2 Trillion by the end of the fiscal year on September 30th, a particually grave threat being that China’s $2 Trillion in reserves are the only thing keeping the US economy afloat.

Russian Intelligence Analysts further report that the long-serving head of Iran’s Atomic Energy Organization, Gholam Reza Aghazadeh, resigned today over fears for his and his family’s safety upon an attack by Israel upon the Persian Nation.

What is not known at this time, these reports summarize, is if Israel’s Iron Dome missile defense system, which the Israelis report has been “successfully tested”, would be able to withstand the estimated 6,000 plus missiles expected to be fired at it by the combined powers of Iran, Syria and Hezbollah.

But, to Israeli war leaders believing that upon the conventional destruction of Iran’s nuclear facilities, the Persian Nation will “sue for peace” rather than be hit by nuclear weapons, these reports state, unequivocally, that Iranian leaders are “fully prepared” to engulf the entire World in “brutal fire” rather than to ever “kneel down” before the “Zionists” they have long stated have no right being in the Middle East in the first place.
[Ed. Note: Western governments and their intelligence services actively campaign against the information found in these reports so as not to alarm their citizens about the many catastrophic Earth changes and events to come, a stance that the Sisters of Sorcha Faal strongly disagrees with in believing that it is every human beings right to know the truth. Due to our missions conflicts with that of those governments, the responses of their ‘agents’ against us has been a longstanding misinformation/misdirection campaign designed to discredit and which is addressed in the report “Who Is Sorcha Faal?”.]