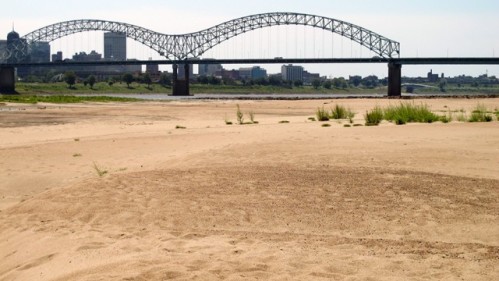 The Mississippi River Is Drying Up

It has been estimated that if all Mississippi River traffic was stopped that it would cost the U.S. economy 300 million dollars a day. So far most of the media coverage of this historic drought has focused on the impact that it is having on farmers and ranchers, but the health of the Mississippi River is also absolutely crucial to the economic success of this nation, and right now the Mississippi is in incredibly bad shape. In some areas the river is already 20 feet below normal and the water is expected to continue to drop. If we have another 12 months of weather ahead of us similar to what we have seen over the last 12 months then the mighty Mississippi is going to be a complete and total disaster zone by this time next year.

Unfortunately, vast stretches of the Mississippi are already dangerously low. The following is an excerpt from a transcript of a CNN report that aired on August 14th….

You might think this is some kind of desert just outside of Memphis. It’s not. I’m actually standing on the exposed bottom of the Mississippi River. That’s how dramatic the drought impact is being felt here. Hard to believe, a year ago we were talking about record flooding. Now, they are worried about a new kind of record: a record low. The river was three miles wide here, it’s now down to three tenths of a mile. And that’s causing all kinds of problems. There are some benefits, I mean, take a look over here: new beach front. In fact, some quip that now the Mississippi River has more beaches than the entire state of Florida, which would be funny if it didn’t have an impact on trade.

A lot of stuff we use goes up and down the Mississippi River. We are talking steel, coal, ore, grain. The problem is now a lot of those barges have had to lighten their loads, and even doing that, they are still running aground. There is a real fear that there could be a possibility of closing the Mississippi River. If that happens, well, all that product that used to be carried cheaply by barge is now going to be carried more expensively by truck or train. And guess who is going to pay for all of that.

You can see video footage of what is happening along the Mississippi right here.

As I mentioned earlier, there are some areas along the river that are already 20 feet below normal levels. The following is from a recent article posted on inquisitr.com….

The drying up river is forcing barge, tugboat and towboat operators to navigate narrower and more shallow spots in the river, slowing their speeds as they pass dangerously close to one another. In some parts of the Mississippi the river is so narrow that one-way traffic is being utilized.

For example, the Mississippi has dropped so low at this point that the famous American Queen Steamboat can no longer safely navigate the river.

Down south, the Mississippi River has gotten so low that saltwater is actually starting to move upriver. The U.S. Army Corps of Engineers is fighting hard to keep that contained.

Other waterways in the middle part of the country are in even worse shape.

For example, a 100 mile stretch of the Platte River has already dried up. Millions of fish are dying as rivers and streams all over the country continue to get shallower and warmer as a result of the ongoing drought.

The last time the condition of the Mississippi River was this bad was back in 1988. At that time, a lot of barge traffic was stopped completely and the shipping industry lost approximately a billion dollars.

If a similar thing were to happen now, the consequences could potentially be far worse.

As I wrote about recently, a standstill along the Mississippi would cost the U.S. economy about 300 million dollars a day.

In fact, one towing company that works on the Mississippi says that it has already been losing about $500,000 a month since May.

In the end, who is going to pay for all of this?

You and I will.

In fact, this crisis could end up costing American consumers a whole lot of money….

So here’s the math. If you want to raise the average barge one inch above the water, you’ve got to take off 17-tons of cargo. To raise it a foot, you’re talking 200 tons.

And since, according to the American Waterways Operators, moving cargo by river is $11 a ton cheaper than by train or truck. The more that now has to be moved on land, well, the more the costs go up. Steven Barry says, ‘And, eventually, the consumer’s gonna pay that price somewhere along the line.’

And considering the fact that we are already facing a potential food crisis due to the drought, the last thing we need is for the Mississippi River to dry up.

So is there any hope on the horizon for the Mississippi?

Unfortunately, things do not look promising.

The fall and the winter are typically drier than the summer is along the Mississippi River. That means that conditions along the river could actually get even worse in the months ahead.

The following is from a recent Time Magazine article….

But without significant rainfall, which isn’t in any long-range forecasts, things are likely to get worse. As summer turns to fall, the weather tends to get drier. Lower temperatures generally mean fewer thunderstorms and less rainfall.

‘Take away the thunderstorm mechanism and you run into more serious problems,’ says Alex Sosnowski, expert senior meteorologist for AccuWeather.com. And while droughts tend to be a temporary setback, longer-range forecasts are troublesome. Sosnowski says he is anticipating an El Niño weather pattern next year, which would mean below-normal snowfall and above-average temperatures.

Let us hope and pray that we don’t see another 12 months similar to the 12 months that we have just been through.

The U.S. economy is already in bad enough shape.

We don’t need any more major problems on top of what we are already dealing with.

So what do you think about this? Please feel free to post a comment with your thoughts below….