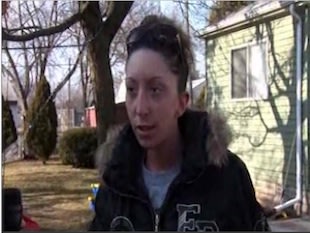 Lottery winner on food stamps even after $1 million jackpot

People love stories about someone winning the lottery and then giving the money away. They’re less likely to feel fondly about Amanda Clayton, who won $1 million in the Michigan State Lottery but is still collecting food stamps.

“I thought that they would cut me off, but since they didn’t, I thought maybe it was OK because I’m not working,” Clayton, 24, told Local 4 news in Detroit.

Back in December, a woman in Washington State fell under scrutiny when it was revealed she was receiving state economic benefits even though she lives in a $1 million waterfront home on Lake Washington.

Clayton, who says she owns two homes and a new car, receives $200 a month in food assistance from the state-issued Michigan Bridge Card, which is meant to benefit lower-income residents in the nation’s eigth most economically depressed state.

Twenty-five percent of Michigan’s residents receive some form of food assistance from the state. The state’s unemployment rate is 9.3 percent, more than a full point above the national average, but has dropped from a 10.4 percent peak in August.

And Clayton isn’t embarrassed about living off the state even though she now finds herself in the nation’s top tax bracket. “I mean I kinda do,” Clayton told Local 4 when asked if she had a “right” to the government welfare.

She certainly doesn’t the fit the mold of other lottery winners we have told you about here at the Sideshow, including the number of repeat winners of the Georgia State Lottery, many of whom chose to donate their initial winnings to charity or family members in need.

Clayton downplayed her wealth, saying she took the $1 million in a lump sump, which meant about half immediately went to taxes. “I feel that it’s OK because I mean, I have no income and I have bills to pay,” she said. “I have two houses.”

“Public assistance should be given to those who are in need of public assistance, not those who have found riches,” Zorn told Local 4. The bill, which has already passed the state House and has a sister bill in the Senate, would require the state to cross check the names of lottery winners over $1,000 to see if they are also receiving state financial benefits.

And she wasn’t the only one.

The Dumbest Barack Obama Quotes of All Time

10. “No, no. I have been practicing…I bowled a 129. It’s like — it was like Special Olympics, or something.” –making an off-hand joke during an appearance on “The Tonight Show“, March 19, 2009 (Obama later called the head of the Special Olympics to apologize)

9. “I didn’t want to get into a Nancy Reagan thing about doing any seances.” -–after saying he had spoken with all the living presidents as he prepared to take office, Washington, D.C., Nov. 7, 2008 (Obama later called Nancy Reagan to apologize)

8. “The reforms we seek would bring greater competition, choice, savings and inefficiencies to our health care system.” –in remarks after a health care roundtable with physicians, nurses and health care providers, Washington, D.C., July 20, 2009

7. “What I was suggesting — you’re absolutely right that John McCain has not talked about my Muslim faith…” –in an interview with ABC’s George Stephanopoulos, who jumped in to correct Obama by saying “your Christian faith,” which Obama quickly clarified, Sept. 7, 2008

6. “UPS and FedEx are doing just fine, right? It’s the Post Office that’s always having problems.” –attempting to make the case for government-run healthcare, while simultaneously undercutting his own argument, Portsmouth, N.H., Aug. 11, 2009

5. “I think when you spread the wealth around, it’s good for everybody.” — defending his tax plan to Joe the Plumber, who argued that Obama’s policy hurts small-business owners like himself, Toledo, Ohio, Oct. 12, 2008

4. “The Cambridge police acted stupidly.” —commenting on a white police officer’s arrest of black scholar Henry Louis Gates Jr. at his home in Cambridge, Mass., at a news conference, July 22, 2009. Obama later had to convene a “Beer Summit” at the White House to help tamp down the controversy stirred by his remark

3. “It’s not surprising, then, they get bitter, they cling to guns or religion or antipathy to people who aren’t like them or anti-immigrant sentiment or anti-trade sentiment as a way to explain their frustrations.” –speaking at a San Francisco fundraiser about his troubles winning over some small-town, working-class voters, April 11, 2008

2. “One such translator was an American of Haitian descent, representative of the extraordinary work that our men and women in uniform do all around the world — Navy Corpse-Man Christian Brossard.” –mispronouncing “Corpsman” (the “ps” is silent) during a speech at the National Prayer Breakfast, Washington, D.C., Feb. 5, 2010 (The Corpsman’s name is also Christopher, not Christian)