There is wild disagreement about what is causing it, but what most people can agree on is that there is something fundamentally wrong with America. The fabric of American society just does not seem to be as strong as it used to. In fact, many would argue that society is coming apart at the seams. Corruption and decay seem to be everywhere. I spend a lot of time in my other articles blaming a lot of this corruption and decay on politicians, bureaucrats and business leaders, but the reality is that they are only part of the story. The truth is that those who are leading us are a reflection of what we have become as a nation. If you got rid of all of our corrupt leaders that would not suddenly “fix” this country. Millions of ordinary Americans have become deeply corrupt as well. The kinds of things that you are about to read about below were very rare in past generations. Society is falling apart all around us and we haven’t even seen the complete collapse of the U.S. economy yet.

A lot of people like to blame the increasingly bizarre behavior of the American people on the economy, but the reality is that things are not nearly as bad as they are eventually going to be. Yes, the U.S. “Misery Index” recently hit a 28 year high. Tens of millions of American families are deeply suffering. Unemployment is rampant and unprecedented numbers of Americans have been getting kicked out of their homes.

But that is nothing compared to what is coming.

So what is America going to look like when true economic suffering comes along?

That is something to think about.

A lot of the items in the list below may seem easy to dismiss as “isolated incidents”. But when you start examining patterns of behavior over an extended period of time, certain trends begin to emerge. America is become a very cruel place. The love of most people seems to be growing cold. What some people are willing to do for a little bit of money or just because someone has “pissed them off” is absolutely stunning. The America of today is fundamentally different from the America of past generations.

We have changed, and not for the better. 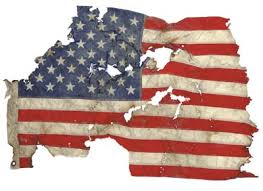 The following are 20 signs that the fabric of American society is coming apart at the seams…..

#1 A 17-year-old Florida teen is being accused of killing his parents with a hammer, hiding their bodies in the master bedroom, and then inviting dozens of people over for a massive house party.

#2 What is it with 17-year-olds? Another 17-year-old has been charged with putting a plastic bag over the head of his mother and choking her to death with a belt. His two brothers just stood by and watched while this happened. Apparently the 17-year-old was infuriated because his mother wanted them to play a game of Yahtzee with her.

#3 The largest school cheating scandal in the history of the United States was recently uncovered in the Atlanta area. Dozens of teachers and principles were involved according to a recently released 413 page report….

More than three quarters of the 56 schools investigated cheated on a 2009 standardized state test, with 178 educators implicated, including 38 principals. Eighty-two teachers confessed to erasing students’ answers and correcting tests. The report says widespread cheating has occurred since at least 2001 and that orders to cheat came from the top.

#4 A Vancouver, Washington woman has been charged with trying to sell her newborn baby in front of a Taco Bell. Apparently she was hoping to get somewhere between $500 and $5000 for the baby.

#5 In the United States today, if you don’t show cops “proper respect” there is a good chance that you are going to get tazed. Just check out this disturbing video of an incident that recently happened in Alabama.

#6 A 48-year-old woman in California was recently arrested after she drugged her husband, chopped off his manhood and threw it into the garbage disposal.

#7 In the Dallas area, five people (including a pregnant woman) were trampled while lying on the ground as thousands of desperate people madly dashed to get into line to get on a waiting list for rental assistance vouchers.

#8 A 35-year-old New York man that has been charged with “kidnapping, killing and dismembering an 8-year-old boy” says that he “hears voices” and he has been ordered to undergo a psychological evaluation.

#9 There has been a rash of car robberies in the Atlanta area recently. Just a couple of nights ago, more than 30 cars were broken into in a single night in south Buckhead.

#10 All over the United States this summer, thieves are stealing just about anything they can get their hands on. People are stealing air conditioners, copper wiring, restaurant furniture, metal drain covers and even hair extensions.

#11 In Woodstock, Georgia a 61-year-old man reportedly promised to give a 17-year-old boy money if he would do certain “things” for the man. Well, it turns out that the 61-year-old man ended up setting the teen on fire….

A 61-year-old man has been arrested on charges of aggravated battery, cruelty to children, false imprisonment, and solicitation of sodomy after he set a 17-year-old boy on fire in Woodstock.

#12 In Washington state, a 23-year-old woman is accused of dumping her newborn baby into a trashcan at the hospital. When a nurse finally found the plastic bag with the baby boy inside of it, the child was blue in the face from a lack of oxygen. Fortunately, the baby survived the ordeal.

#14 The National Retail Federation says that “inventory loss” for retail stores was up 11% last year. Most of the “inventory loss” is attributed to such things as shoplifting and employee theft.

#16 One of the hot new trends for young males is to play the “knockout game“. In this “game”, a group of young men picks out an innocent bystander and the first one to knock that person out is the “winner”.

#17 Prior to 2011, most Americans had never even heard of “mob robberies“. Today, they have made headline news all over the nation.

If you thought these were crazy, check out 8 Weirdly Sexual Products You Won’t Believe Are for Kids and 15 “Unintentionally” Perverted Toys for Children

Whatever your political or religious philosophy is, hopefully you can agree that America is in trouble. Every single day, there are more shocking revelations about the corruption and the decay that are spreading throughout this nation.

Sadly, instead of coming together to work on some solutions to our growing problems, Americans are becoming more divided than ever.

The mainstream media teaches us that our “opponents” are those that belong to political, social or religious groups that are different from our own. They love to divide us and play us off against each other. Everywhere you look in America, hate is growing.

But hatred is never the answer. Yes, we should always stand up for what we believe is right, but we can do that and still love one another at the same time.

Unfortunately, as America continues to come apart at the seams we are probably going to see this country become even more divided.

United we stand, divided we fall – you make the call America.