— Thousands of ebullient Russians stood in a nearly continuous 10-mile chain circling the center of Moscow on Sunday, warning Prime Minister Vladimir Putin that his years of undisputed rule are over even as he prepares to take the presidency in an avalanche of votes next week.

Putin has been Russia’s unchallenged master for 12 years, and the demonstrators who have been rallying persistently since December understand that there is virtually no possibility he will depart any time soon. Winning the March 4 election will put him in office for another six years. But the demonstrators have him on notice that they are grooming themselves as involved citizens and will be heard.

And so they stood, in freezing puddles and falling snow, shoulder to shoulder along most of Moscow’s Garden Ring Road — double rows here, a sparse stretch there. With the color white as the symbol of their desire for clean elections and a clean government, they wore white ribbons, flew white balloons, brandished white scarves and waved white roses or chrysanthemum bouquets.

The plan was to stand in silence, but cars filled with supporters cheered them on, cruising slowly before the demonstrators, saluting them, waving their own ribbons and flowers, honking their horns with exuberance.

“People are happy,” said Andrei Filozov, planted on a corner near a sea of muddy water. “They feel free.”

After years of acquiescence, they had given themselves the freedom to act. “We’re standing here, showing the changes that have gone on inside ourselves,” said Filozov, 43, a philosopher. “It’s very mystical.”

The latest poll by the independent Levada Center suggests that Putin will win 63 to 66 percent of the vote in the contest. That is no surprise, Filozov said, given the vast government resources at his disposal and the average person’s political inexperience. People need time to nurture their political awareness, and realistically their goals must be long-term, he said. But they will not turn back to the years of indifference that allowed Putin to grow so powerful.

“He will not occupy too many pages in our history books,” Filozov said. “It will be a short history, sad and dark.”

Alexander Sotin, 40, a historian, said the Muscovites standing in the cold were trying to remember what it was like to be a citizen and not a subject.

“Today this great city is like a small village as we make a community of ourselves,” he said. “I hope that year by year our Russian people will make themselves masters of their own fate.”

Police estimated that 11,000 people took part Sunday, although a rough estimate made during a trolley ride of the circuit suggested twice that number — not counting the people in the many cars that honked in solidarity.

The sentiment was anti-Putin and pro honest elections, rather than a rally in favor of an opposition candidate. One car carried a sign in favor of honest amphorae, an allusion to a dive Putin made in the Black Sea last year, when he came to the surface clutching two obviously planted ancient Greek urns.

The exuberant drivers lifted the spirits of Maria Kokovkina, 32, a psychologist. “On my way here, I wasn’t feeling very cheerful,” she said, “but now I feel great.”

She knows the euphoria won’t last, but people have awakened from their acceptance of the status quo, and for now that is accomplishment enough, she said.

“Stability is the biggest myth of the Putin Age,” said Danik Lalin, who works in information technology. “There’s a slow but steady rotting. If you call that stability, then the best stability is in the morgue.”

Irina Andreyeva, 84, came to Moscow from Archangel, near the Arctic Circle. Barely 5 feet tall, she waved her white ribbon energetically at the passing cars. “I feel young and full of life here,” she said. “I feel as I did in 1991.” That was the year she demonstrated for freedom, democracy and Boris Yeltsin — and celebrated the demise of the Soviet Union.

Alexei Bolshakov, 59, came to Moscow from Almetyesk, 660 miles to the east, because he was angry that government employees had been sent to populate a huge pro-Putin rally Thursday, and he was irritated that Putin had accused the United States and Secretary of State Hillary Rodham Clinton of stirring up the opposition and financing it.

Late in the afternoon, several hundred activists gathered in Revolution Square, met by a large contingent of riot police as well as men dressed as Cossacks with whips and scowling young men in civilian clothes who the protesters believed to be provocateurs. One activist was attacked by a young man with a beer bottle; a fight ensued and a few arrests were made.

Overall, the day went peacefully, with demonstrators reflecting on a future without Putin in charge — a future they would like to see begin March 5, the day after the election. Russian warships are due to arrive at Syrian territorial waters, a Syrian news agency said on Thursday, indicating that the move represented a clear message to the West that Moscow would resist any foreign intervention in the country’s civil unrest.

Also on Friday, a Syrian official said Damascus has agreed “in principle” to allow an Arab League observer mission into the country.

But the official said Friday that Syria was still studying the details. The official asked not to be named because the issue is so sensitive.

The Arab League suspended Syria earlier this week over its deadly crackdown on an eight-month-old uprising. The 22-member body has proposed sending hundreds of observers to the country to try to help end the bloodshed.

The report came a day after a draft resolution backed by Arab and European countries and the United States was submitted to the United Nations General Assembly, seeking to condemn human rights violations in the on-going violence in Syria.

Jordan, Morocco, Qatar, and Saudi Arabia were among Arab states that joined Germany, Britain, and France to sponsor the draft submitted to the assembly’s human rights committee. In Washington, State Department spokesman Mark Toner said the U.S. would sign on as a co-sponsor of the resolution.

The draft demanded an end to violence, respect of human rights and implementation by Damascus of a plan of action of the Arab League.

The move comes as clashes escalated in Syria and after Russia and China used their veto in October to block a Security Council resolution that would have condemned the Syrian government of President Bashir for the violence.

Such a veto is not applicable in the 193-nation assembly, which will consider the issue after the human rights committee reports back to it.

The UN says more than 3,500 people have been killed since unrest erupted in spring against Assad.

By Susan Cornwell and Jim Wolf

WASHINGTON, – The United States has invited Russia to use its own radars and other sensors to size up one or more U.S. missile-defense flight tests as part of a new push to persuade Moscow that the system poses it no threat, a Pentagon official said on Tuesday.

The idea is to let Russia measure for itself the performance of U.S. interceptor missiles being deployed in and around Europe in what Washington says is a layered shield against missiles that could be fired by countries like Iran.

They would be ineffective as anti-missile interceptors against a country like Russia, whose strategic deterrent missiles are launched from deep inside its territory, he said. The SM-3 interceptor, to be based on land and at sea, “can’t reach that far.”

President Barack Obama pleased the Kremlin in 2009 by scrapping his predecessor’s plan for longer-range interceptor missiles in Poland and a radar installation in the Czech Republic, a move that helped to improve U.S.-Russian ties.

But Moscow says that Obama’s revised version, which includes participation by Romania, Poland, Turkey and Spain, could undermine Russia’s security if it becomes capable of neutralizing Russia’s nuclear deterrent and has warned of a new arms race if its concerns are not met.

Ellen Tauscher, undersecretary of state for arms control and international security, told the forum that the United States was prepared to offer Moscow written assurances that the system being built is not directed against Moscow.

But Tauscher, who held talks in Moscow last week on the issue with Russian Deputy Foreign Minister Sergei Ryabkov, added: “We cannot provide legally binding commitments, nor can we agree to limitations on missile defense, which must necessarily keep pace with the evolution of the threat.”

She said she could not predict whether Russia and NATO would reach an agreement on missile defense cooperation in time for a NATO alliance summit next May that is due to consider the system’s progress. The United States would like to partner with Moscow to boost its performance, including by using Russian radar systems.

“As time goes on it gets harder (to wrap in Russia),” Tauscher said, “because the aperture to join this system will close eventually. It’s not an infinite opportunity.” 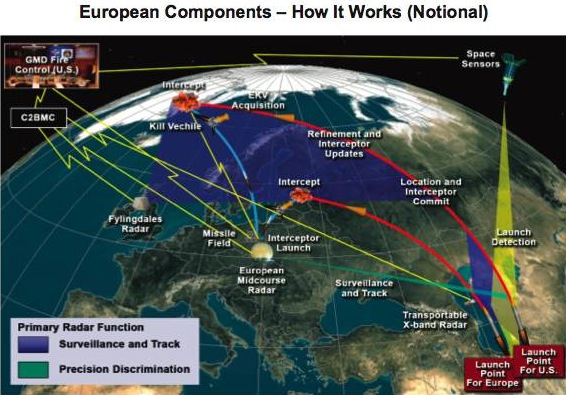 The Missile Defense Agency, in a follow-up email to Reuters, said it had not yet determined which test or tests it would open to active Russian participation.

Russia would not receive any classified performance data on the U.S. system, said Richard Lehner, an MDA spokesman, but would be welcome to use its own radars, sensors and other know-how to measure interceptor speed, altitude, distance and other parameters.

Tauscher said the planned missile shield would be robust enough to manage the threats that Washington projects in the Middle East but “certainly would only chase the tail of a Russian ICBM or SLBM.” Those are the acronyms for long-range missiles fired from land or from submarines.

“And that’s the truth,” she said. “Perhaps only with their eyes and ears will Russians embrace that.”