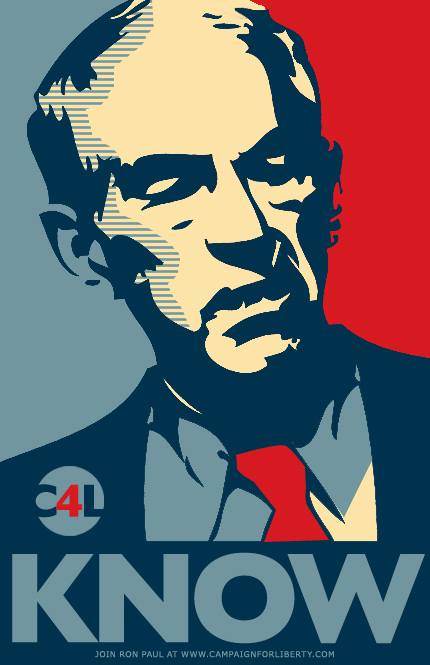 The Top 10 Reasons Why Dr. Ron Paul Is the Only Rational Choice

The top 10 reasons why Dr. Ron Paul is the only rational presidential choice for Americans, Democratic, Republican and Independent:

10. Dr. Paul works a real job, has run a small a business and served in the military. He has been a physician for 40 years, co-owned a coin store for 12 years and was a flight surgeon in the U.S. Air Force and U.S. National Guard for five years. That was how our country was set up — for public servants to work a real job that they returned to after their public service was done. He has real skills and is not a professional politician.

9. Dr. Paul has decades of experience running a business and in depth knowlegde of health care.

8. Dr. Paul understands money and is chairman of the House Financial Services Subcommittee on Domestic Monetary Policy and Technology.

7. Dr. Paul does the right thing referencing the U.S. Constitution and works for the country versus campaigning for his ego. He has been serving the public in politics for over 40 years.

6. Dr. Paul refuses to accept a federal pension for his public service, something other members get after a short period because they do not have real jobs. According to Dr. Paul, to receive a pension for public service would be “hypocritical and immoral.”

5. Unlike most other candidates out there, Dr. Paul is not a good-looking, smooth-talking, snake charmer or charismatic zealot. He is a regular, plain-spoken person who says it the way it is.

4. Dr. Paul doesn’t care if big groups like him (like unions and businesses). His donations come primarily from individuals, not from groups. He is willing to serve his country honorably without personal gain. Dr. Paul will do what is right for the U.S. based on the Constitution whether or not big money or big government likes it.

3. Dr. Paul has written a bill, called the Sun Light Rule that requires our politicians have at least 10 days to read bills before signing them.

2. Dr. Paul will bring practical wisdom, cut spending, balance the budget, stabilize the economy and probably be able to do away with the IRS and income tax, a tax that is not constitutional and was started to fund the civil war and supposed to stop after the civil war. He wants to abolish the U.S. Department of Education, giving the states and parents back control. He wants to do away with other large government agencies, restoring the rightful power to the states.

1. Dr. Paul’s old-fashioned decency, integrity, honor and real-life experience are exactly what our country needs after hiring actors, puppets, oil and other group-connected slick sales men and marketers. He’s been married to the same woman, Carol, for 54 years (married 1957).

Electing dishonorable, irresponsible, good-looking, smooth-talkers over the past several decades has eroded our country’s stability.

Are Americans finally ready to elect an honest, decent man who will not listen to non-sense from regular Americans, politicians or corporations? A president who will be accountable and hold us all accountable? I hope so.

“Special interests have replaced the concern that the Founders had for general welfare. Vote trading is seen as good politics. The errand-boy mentality is ordinary, the defender of liberty is seen as bizarre. It’s difficult for one who loves true liberty and utterly detests the power of the state to come to Washington for a period of time and not leave a true cynic.” — Dr. Paul

“He does not take money from corporate PACs. Lobbyists cannot sway him; to try is a waste of time. He never bargains with his own deeply held beliefs, nor does he cut backroom deals. Because his political views and his personal convictions are in complete harmony, he seldom faces a “tough” vote. And when the politicking for the week is over, he returns to his district to take up his lifelong occupation, which has nothing to do with politics.” — S. C. Gwynne