Just a few weeks after a similar move by Virginia was met with controversy, Florida has also adopted achievement standards based on race and ethnicity.

The new goals are required under Florida’s waiver from No Child Left Behind. Many expressed skepticism over the race-based targets.

“To expect less from one demographic and more from another is just a little off-base,” Juan Lopez, magnet coordinator at John F. Kennedy Middle School in Riviera Beach, told the Palm Beach Post. The school’s black student population is about 88 percent. “Our kids, although they come from different socioeconomic backgrounds, they still have the ability to learn. To dumb down the expectations for one group, that seems a little unfair.”

Former Florida Gov. Jeb Bush previously said such measures would send a “devastating message” that black and Hispanic students weren’t as capable as others. Palm Beach County School Board Vice-Chair Debra Robinson tells the Post that she’s “somewhere between complete and utter disgust and anger and disappointment with humanity.”

Florida officials, however, say the opposite, noting that the standards are meant to acknowledge current performance and make a plan for improvement.

According to author and presidential professor emeritus at UCLA Jeannie Oakes, eliminating traditional tracking methods that measure performance based on race is essential to facilitating comparable success among different races.

“Once we put students in groups, we give them very different opportunities to learn — with strong patterns of inequality across teachers, experience, and competence,” Oakes says. “There was this pervasive view that Latino and African American kids can’t measure up in a way that more affluent or white kids can and we can’t do anything about it.”SOURCE 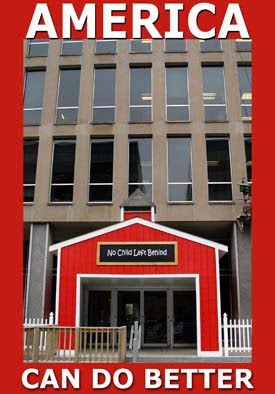 WASHINGTON (AP) – (WPVI) — President Barack Obama is giving states the flexibility to opt out of provisions of the No Child Left Behind law, a move he says is designed to energize schools but Republicans challenge as outside his authority.

The law, a Bush-era education initiative passed with bipartisan support, has grown increasingly unpopular as more schools risk being labeled a failure.

Under the plan Obama was to outline Friday, states would be allowed to ask the Education Department to be exempted from some of the law’s requirements if they meet certain conditions. That includes enacting standards to prepare students for college and careers and setting evaluation standards for teachers and principals.

“To help states, districts and schools that are ready to move forward with education reform, our administration will provide flexibility from the law in exchange for a real commitment to undertake change,” Obama said in a statement Thursday. “The purpose is not to give states and districts a reprieve from accountability, but rather to unleash energy to improve our schools at the local level.”

The administration says it is acting because Congress has been slow to address the issues by rewriting the law.

But Rep. John Kline, R-Minn., who chairs the House Education Committee, has questioned whether the Education Department has the authority to offer waivers in exchange for changes it supports. He’s said the president has allowed “an arbitrary timeline” to dictate when Congress should get the law rewritten and that the committee needs more time to develop its proposals.

Kline on Thursday called the administration’s plan a political move and said he could not support a process that sets a precedent by granting the education secretary “sweeping authority to handpick winners and losers.”

Sen. Mike Enzi, R-Wyo., the ranking member on the Senate committee that oversees education, said the president’s plan would undermine the policymaking authority of Congress.

Education Secretary Arne Duncan has said the plan would not undermine efforts in Congress because the waivers could serve as a bridge until Congress acts.

Duncan said the emphasis would be more on growth than on test scores.

The No Child Left Behind law passed in 2001 with widespread bipartisan support and much fanfare. It sought to hold schools more accountable for student performance and get better qualified teachers into the classrooms. It also offered school choice and extra tutoring to students attending schools deemed failing. In Obama’s plan, states granted waivers would have more control over how troubled schools are handled, although to qualify for a waiver they would have to show they had a plan to help low-performing schools. A majority of states are expected to apply for waivers, which will be given to qualified states early next year.

Critics say the law placed too much emphasis on standardized tests, raising the stakes so high for school districts that it may have driven some school officials to cheat. In particular, the requirement that all students be on grade level in math and reading by 2014 has been hugely unpopular.

Duncan has warned that 82 percent of schools next year could fail to reach proficiency requirements and thus be labeled “failures,” although some experts questioned the figure.

He has said it is “dishonest” for schools to be labeled as failing if they are showing real improvements and that the law is creating a “slow-motion educational train wreck.” Duncan also has said that many states under the law have lowered standards instead of making them more rigorous.

The law has been due for a rewrite since 2007. Obama and Duncan had asked Congress to overhaul it by the start of this school year but a growing ideological divide in Congress has complicated efforts to do so.

The GOP-led House Education Committee has forwarded three bills that would revamp aspects of the law but has yet to fully tackle some of the more contentious issues such as teacher effectiveness and accountability.