In 1997’s Pigford vs. Glickman case, approximately 400 African (hyphen) American farmers sued the US Department of Agriculture claiming racial discrimination from 1983-1997. When the case was settled an estimated 2,000-3,000 claims were expected to be filed with awards reaching $50,000 each. Today, nearly 92,000 black ‘farmers’ are claiming ‘Pigford’ reparations — 5 times the number of blacks who were operating farms at the time.

And with yesterday’s announcement of ‘Pigford 3‘ and ‘Pigford 4‘ under way [Obama’s streamlined process that makes women and Hispanics who ‘attempted-to-farm‘ or ‘attempted-to-own land’ eligible for $50,000 each], we can count on mainstream media sticking their heads in the sand for this storm:

(Verum Serum) This should be a case about public corruption, one that involves the President since he recently signed off on more money for this settlement. There are three reasons it’s not on the front page of the NY Times. 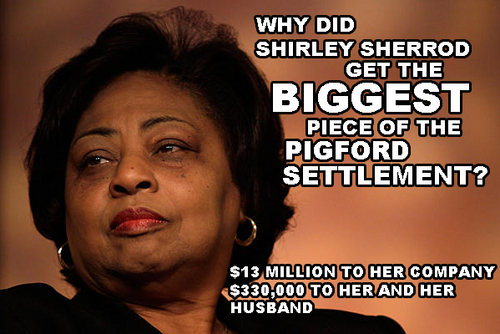 Reason 1: There were some real victims here, black victims. That’s shameful. No one likes to linger on their shame, especially not the government. And that goes for media outlets who, by and large, are on the current administration’s side.

Reason 2: If this was investigated it would undoubtedly uncover hundreds of people who took advantage of the system, all of them black. No one at the Times or the Post wants to portray blacks as victimizers of the public trust. Exposing something like this as reality would be a blow to the liberal narrative about government handouts and minorities. The Times won’t lend credence to what they see as a negative stereotype, i.e. “welfare queens.”

Reason 3: And this may be the biggest one of all. Andrew Breitbart broke the story. The liberal media is emotionally invested in Breitbart’s failure. You could see that in the grudging way they covered the ACORN story. You could see it in the gleeful way they covered the Shirley Sherrod story. They refuse to give him a win, especially one which would rehabilitate his image and make him more powerful going into 2012. They hate him. It’s obviously a factor in this situation.

Sure, liberal mainstream media has Breitbart and a whole host of other ‘patriots’ in their crosshairs, but there are endless reasons for their convenient lack of coverage regarding Pigford and ACORN; not to mention, the recent Planned Parenthood underage sex rings. With that in mind, I’d like to add Reason #4: Government-Run media hiding truth for the sake of rewriting history — aka Ingsoc. Back to the article…

There are only three courses left to the MSM:

One, pretend it isn’t happening or, at best, frame the complaints as the product of far right troublemakers with no facts offered to back them up. That’s going to be increasingly difficult in light of this video tape [last clip below], but it wouldn’t be the first time Times readers have gone without the facts.

Two, write a massive article full of pathos for the real victims and minimize or sidestep the fraud issue. In other words, let it be known that the Grey Lady has decided the good outweighs the bad so it’s okay to turn a blind eye on this one.

Three, investigate and let the chips fall where they may. Of all the options, this is the least likely.

To continue down this rabbit hole, perform a couple of internet searches on ‘Shorebank‘ and ‘Shirley Sherrod‘.

On Tuesday, November 30, the House of Representatives passed the Claims Resolution Act of 2010, which authorizes nearly $4.6 billion to fund the settlements in two class-action discrimination lawsuits. The measure passed 256-152. It now goes to the President for his signature, ending a long, tortuous, but ultimately successful path to becoming law.

The bill also included resolution of tribal water rights claims for the White Mountain Apache, Crow, Taos Pueblo, and Aamodt Tribes, plus a one-year extension of the Temporary Assistance for Needy Families (TANF) program. The bill will now be sent to the White House for President Obama’s signature, after which it will return to court to confirm the fairness of the settlement and establish distribution of funds to the class members.

The bill is identical to the Senate version passed earlier this month. To read NSAC’s analysis of the Senate bill, click here.

Representatives opposed to passage of the bill, such as Rep. Steve King (R-IA), repeatedly raised suspicions of fraud regarding the Pigford settlement. These suspicions were rejected by supporters of the bill, such as Rep. Steny Hoyer (D-MD), who added, “we did the wrong thing, and all of us acknowledge it is never too late to do the right thing.”

NSAC was pleased to publicly support the bill and to work behind the scenes to help gain passage. We applaud the Administration for pushing and the Senate and House for getting the job done, and our hats are off to the Network of Black Farm Groups and Advocates for their tireless quest for justice.