Getting Hosed at the Pump

http://www.JewishWorldReview.com | Gas prices are going up. A lot. Already the cost of a gallon of gas has increased by 51.4 cents over the past year. By this summer don’t be surprised to see $5.00 a gallon prices at the pumps. That will mean anywhere from $85.00 to $100.00 or more to fill up your tank. But before you start cursing out the big evil oil companies again, let me tell you that it’s a lot more complicated than that. Several factors are at work here.

Even though we’ve had a warmer than normal winter across the country resulting in less demand for heating fuel (which usually means larger supplies of oil in reserve, and should translate to lower prices for us) our gas and oil prices have skyrocketed. As Fox’s Lou Dobbs has pointed out, this is because oil companies HAVE NOT stockpiled the oil that we didn’t use; they have sold it overseas to developing nations like China and India and jacked up prices to us here at home. But this is only half of the story.

President Obama is complicit in this rip off. He is simply fulfilling one of his campaign promises to turn the U.S. into a more “green energy” friendly country. Investors Business Daily has pointed out that during his presidential campaign, Obama admitted he didn’t have a problem with sky-high gasoline prices, he just “would have preferred a gradual adjustment.”

The idea is to make traditional energy sources such as gasoline and oil so expensive that it will force the public into using alternative fuels. His energy secretary, Steven Chu, told the Walt Street Journal before joining the administration that “somehow we have to figure out how to boost the price of gasoline to the levels in Europe.”

In a follow-up article, ABC News interviewed a scientist who had worked with Chu, Lee Schipper, who estimated that European gas prices were at about $7 to $9 per gallon back in 2008. And last year, Chu claimed “the price of gasoline over the long haul should be expected to go up.”

Obama has said that he wants to “reduce the nation’s dependence on foreign oil,” but what he really wants is to reduce the country’s dependence on ALL oil, both foreign and domestic and put us all into electric cars. You might not think that is such a bad idea, and you might be right except for one little thing? the electric cars use more energy and are worse for the environment than the internal combustion engine.

A new British study suggests that electric vehicles might not be as green as environmentalists think. Because of pollution from the factories that make batteries, an electric car has a bigger carbon footprint than a gas-burning vehicle until it’s traveled 80,000 miles, according to the research, which was financed by the Low Carbon Vehicle Partnership.

Ed Morrissey at Hot Air says, “Electric cars aren’t so good for the planet after all. Not only do electric vehicles produce just as much carbon in their overall cycle as internal-combustion engines, the need to replace the batteries actually makes them less green than current technology.” If we want a cleaner way to get around, “the answer is natural gas, not electric vehicles.”

Not only that, but findings from researchers at University of Tennessee, Knoxville, show that electric cars that have been studied in China have an overall impact on pollution that could be more harmful to health than gasoline vehicles.

“An implicit assumption has been that air quality and health impacts are lower for electric vehicles than for conventional vehicles,” Cherry said. “Our findings challenge that by comparing what is emitted by vehicle use to what people are actually exposed to. Prior studies have only examined environmental impacts by comparing emission factors or greenhouse gas emissions.”

But none of this matters. Ideology trumps facts in the Obama administration every time. Whenever Obama has had the chance to encourage oil production, he’s done the opposite. Consider the following:

He needlessly halted Gulf drilling permits after the BP oil spill, and continues to slow-walk them. Permit approvals are less than half their pre-Obama average, and approval times have nearly doubled.

Obama scuttled the 700,000-barrels-a-day Keystone XL pipeline, despite approval by the State Department after an exhaustive three-year review. In addition to oil, this project would have also resulted in over 25,000 new American jobs.

And he endlessly demonizes oil companies while pushing to sharply raise their taxes.

Interesting isn’t it how a socialistic-leaning president and a capitalistic oil industry can come together to make strange bedfellows. Both are getting what they want, while us poor saps just get hosed again at the pumps. 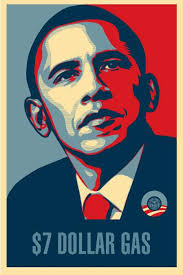 FAIRLESS HILLS, Pa. (AP) — Pitching the promise of energy independence, President Barack Obama cautioned Wednesday that it’s going to be tough to transition from America’s oil-dependent economy and acknowledged there’s little he can do to lower gas prices over the short term.

“I’m just going to be honest with you. There’s not much we can do next week or two weeks from now,” the president told workers at a wind turbine plant. It’s a theme Obama’s struck before as he tries to show voters he’s attuned to a top economic concern with gas prices pushing toward $4 a gallon.

Obama said he wants to move toward “a future where America is less dependent on foreign oil, more reliant on clean energy produced by workers like you.” That will happen by reducing oil imports, tapping domestic energy sources and shifting the nation to renewable and less polluting sources of energy, such as wind, the president says. He has set a goal of reducing oil imports by one-third by 2025.

But the president said it won’t happen overnight and if any politician says it’s easy, “they’re not telling the truth.”

“Gas prices? They’re going to still fluctuate until we can start making these broader changes, and that’s going to take a couple of years to have serious effect,” Obama said.

Obama needled one questioner who asked about gas prices, now averaging close to $3.70 a gallon nationwide, and suggested that the gentleman consider getting rid of his gas-guzzling vehicle.

“If you’re complaining about the price of gas and you’re only getting 8 miles a gallon, you know,” Obama said laughingly. “You might want to think about a trade-in.”

The president spoke at a town hall meeting at Gamesa Technology Corp., a Spanish company that makes giant turbines that use wind to generate electricity. According to the White House, it is the first overseas company of its kind to set up shop in the U.S.

Back in Washington, negotiations continued on a budget deal to avert a government shutdown Friday and Obama urged lawmakers to get it done. The president said he wants to cut spending, but not at the expense of cutting priorities like energy and education.

As fuel prices rise because of growing demand worldwide and political unrest in oil-producing nations in North Africa and the Middle East, drivers are feeling pinched at the pump. Republicans blame Obama and his policies and he, in turn, is striving to show the public that he gets it.

Gasoline prices rose another 2 cents Tuesday to a new national average of just over $3.68 a gallon, according to AAA and other sources. Obama’s visit to Gamesa was his fourth energy event since March 11. He’s scheduled a fifth for Friday in Indianapolis.

Education is another item on Obama’s competitiveness agenda. That issue was to be the focus of a speech he was giving later Wednesday to the Rev. Al Sharpton’s civil rights group in New York City. Obama’s appearance keeps a promise he made to the National Action Network when he spoke there as a presidential candidate in 2007. Obama pledged to return, win or lose.

He returns just two days after launching his re-election bid. He is facing a key constituency that at times has scolded him for not being attentive enough to certain issues, such as double-digit black unemployment, but continues to hold him in high regard. 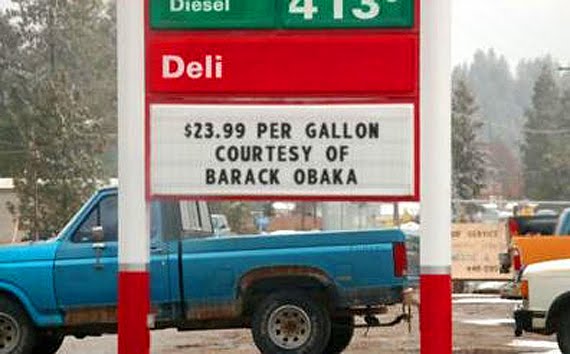 Obama deflects such criticism by arguing that his polices to expand the economy, create jobs and improve the education system, among other goals, will help the country as a whole, blacks included.

Ninety-five percent of blacks who voted, opted for Obama in 2008. A Gallup poll released last week showed his job approval among blacks holding at 84 percent, about the same as six months earlier.

Secretary of State Hillary Clinton had been exhaustively in front of cameras promoting the right for people to protest in Egypt, Bahrain, Iran, and Libya. She’s been touting the freedom to use social networking sites as a way for Arab people to organize against their oppressive regimes. Now, the Administration is even considering arming the opposition in Libya.

Clinton’s perpetual propaganda efforts exposed her blatant hypocrisy when a silent peaceful protester was violently removed from one of her recent speeches on the very subject. However, the hypocrisy now seems to go much deeper in her deafening silence over the prospect for protests in Saudi Arabia.

After Human Rights Watch revealed that a nationwide “Day of Rage” protest had been planned in Saudi Arabia for this week, March 11th, Bloomberg reported that the Saudi government claims that demonstrations and marches are “strictly” prohibited by law. A Saudi Interior Ministry official said protests “contradict Islamic values” and “They harm public interest, infringe on the rights of others, spread chaos and lead to bloodshed.”

This prohibition of popular dissent proves beyond a shadow of doubt that Saudi Arabia is indeed the most tyrannical authoritarian regime in the Arab world. Yet, U.S. Administration officials have been strangely silent about supporting the people’s uprising there. 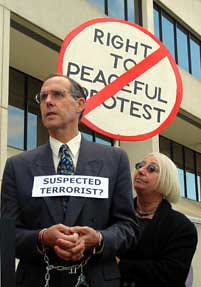 Perhaps they think the protests won’t be large enough to warrant a response. Well, that certainly did stop their best propaganda push to stoke the puny protests in Iran, so the size or ferocity of unrest shouldn’t matter to their exploits of supposedly backing human freedom. And one would think that given what has happened to oil prices due to the unrest in Libya and Egypt, even a minor protest in the largest oil-producing dictatorship in the world would draw more public response from the White House.

Or perhaps the Administration believes that the hastily-crafted $35 billion social aid package ordered by King Abdullah will be enough to tamp down escalating tensions in Saudi Arabia. So far, there have only been reports of small Shiite protests in Saudi Arabia, mostly demanding the release of political prisoners held by the Sunni monarchy.

These protests would seem to be very minor in comparison to the sea of people revolting in Cairo. However, the revolutionary whispers must clearly be getting louder as the Saudi stock market plummeted 11% in just two days of wild trading to its 7-year low on fears of civil unrest. It’s noteworthy that the plunge was reportedly led by large banks and insurers.

If Clinton is to stand by her new-found rhetoric, certainly she’ll call for restraint on the part of the Saudi government should a protest erupt, right? And surely she’ll demand that the kings of Internet censorship in the Arab world, Saudi Arabia, will open communication channels so the people can freely unite, right? And if push comes to shove in Saudi Arabia, she’ll definitely support arming the people’s opposition to the royal family, right? Eh hum . . . don’t count on it.

Regardless, many analysts believe the Saudi regime is the next to fall with or without the prodding of the U.S.

Sacred War, Holy War: The Secret Combination of Islam and Communism
This article is 4 short pages. Be sure to click on 2-4 at the btm of each page to go to next section.
http://www.newsrealblog.com/2010/12/30/sacred-war-holy-war-the-secret-combination-of-islam-and-communism/