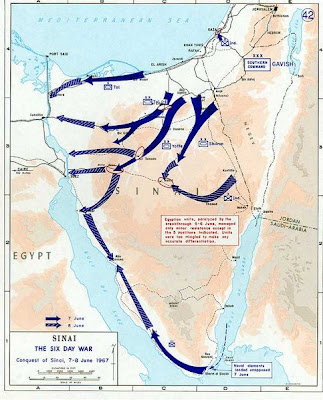 Netanyahu agreed to ceasefire after Obama promised US troops in Sinai next week?

Israel and Palestine are momentarily at a ceasefire, but the potential reasoning behind the recess could have some real international implications. Israel’s Debka reports that the pause in fighting comes after the US promised to send troops to Sinai.

According to Debka, US troops will soon be en route to the Sinai peninsula, Egyptian territory in North Africa that’s framed by the Suez Canal on the West and Israel on the East. In its northeast most point, Sinai is but a stone’s throw from Palestinian-controlled Gaza, and according to Debka, Hamas fighters there have been relying on Iranian arms smugglers to supply them with weaponry by way of Egypt.

Debka reports this week that Sinai will soon be occupied by US troops, who were promised by President Barack Obama to Israel’s leaders as a condition that a ceasefire be called. Once deployed, the Americans will intervene with the rumored arms trade orchestrated by Iranians, ideally cutting off supplies for Hamas while at the same time serving as a thorn in the side of Iran.

“Once the missile and arms consignments depart Iranian ports or Libyan arms bazaars, Tehran has no direct control of their transit from point to point through Egypt until they reach Sinai and their Gaza destination,” Debka reports. “All the same, a US special forces operation against the Sinai segment of the Iranian smuggling route would count as the first overt American military strike against an Iranian military interest.”

The decision to send US troops to Sinai in exchange for a ceasefire was reportedly arranged early Wednesday morning after Pres. Obama made a deal over the phone with Israeli Prime Minister Benjamin Netanyahu. In the days prior, Israel was relentless in targeting Gaza, killing more than 100 persons — including civilians — during a renewed assault on Hamas. A ceasefire has since been called after a week of fight, but more military action could soon occur, claims Israel, if the flow of weapons to Gaza is not stopped. Netanyahu has been adamant with his pleas for the United States to strike Iran in an effort to disrupt its nuclear enrichment facilities, a demand which up until now has been brushed aside by Pres. Obama. The White House has up until now insisted on diplomatic measures in order to make an impact on any Iranian output, but Debka’s sources suggest that US troops may now have to intervene in Sinai if any smugglers should attempt to move weapons into Gaza.

“By opening the Sinai door to an American troop deployment for Israel’s defense, recognizes that the US force also insures Israel against Cairo revoking or failing to honor the peace treaty Egypt signed with Israel in 1979,” adds Debka.

According to their sources, US troops are expected in Egypt early next week. Meanwhile, American forces have all but surrounded Iran and are stationed in countless bases across the Middle East.

The United Nations plans to launch several programs aimed at fighting drug trafficking in Afghanistan and neighboring states by the end of 2011, the executive director of the United Nations Office on Drugs and Crime (UNODC) said on Monday.

“Central Asian states, including Kyrgyzstan, remain a large trafficking hub for Afghan drugs,” Yury Fedotov told journalists during a visit to the he

adquarters of the newly established State Drug Control Service in the Kyrgyz capital of Bishkek.

“We are planning to launch new regional anti-drug programs in Afghanistan and neighboring countries by the end of the year,” he said.

Kurmanbek Bakiyev, who was ousted as Kyrgyzstan’s president during a popular uprising in April 2010, dissolved the country’s Drug Control Agency in October 2009, handing over its functions to the interior and health ministries.

The new Kyrgyz authorities made a decision to restore the anti-drug watchdog after Bakiyev’s ouster. The United Nations is planning to spend more than $3 million to support the agency, Fedotov said.

Afghan drug production increased dramatically after the U.S.-led invasion toppled the Taliban in 2001, and Russia has been one of the most affected countries, with heroin consumption rising steeply.

About 90 percent of heroin consumed in Russia is smuggled from Afghanistan via former Soviet republics, including Kyrgyzstan, Tajikistan and Uzbekistan. Around 30,000 Russians die from heroin abuse every year.

Russia has criticized the U.S.-led international coalition in Afghanistan for not doing enough to curb drug trafficking, particularly for refusing to destroy opium poppy fields. Opium production is a major source of income for Afghanistan’s impoverished rural population, as well as for Taliban militants.