In Wake of Tornado, Official Says 1,500 Are Unaccounted For

JOPLIN, Mo. — About 1,500 people are unaccounted for in this battered city, a Fire Department official said Tuesday, as rescue workers took advantage of a few hours of sunny weather to continue searching for survivors in buildings leveled by the country’s deadliest tornado in more than 60 years. At least 117 people have died.

While the number of those unaccounted for is alarmingly high in a city with only 49,000 people — and raises the specter of a far higher death count — it may merely be a reflection of the widespread breakdown of communication systems here in the wake of Sunday’s vicious storm. Many residents who fled ahead of the tornado or survived it may be unable to notify the authorities or family members who have reported them missing.

Capt. Robert Daus of the Maryland Heights Fire District, who is helping to lead a team of about 100 St. Louis-area firefighters in search and rescue operations in Joplin, said that in addition to the 1,500 people who remain unaccounted for, an additional 500 had been injured by the tornado, which cut a three-quarter-mile-wide path through this southwestern Missouri city and damaged as many as 30 percent of its buildings. 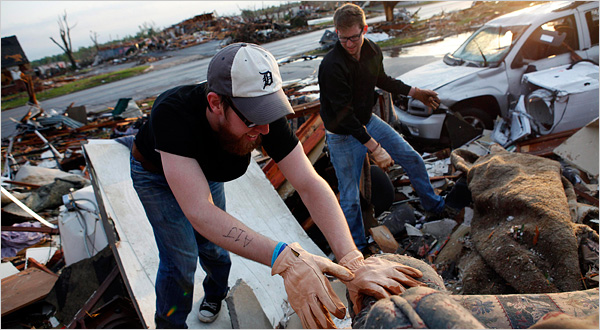 While much of Tuesday provided a respite from the nearly unrelenting rain and wind that had hampered rescue efforts, more challenging weather may be on the way. An unusually strong weather system moving east across the Rockies is expected to mix with moist air heading north from the Gulf of Mexico, carrying with it the possibility of creating severe storms late Tuesday.

“We are expecting some violent storms to develop across Kansas and Oklahoma today bringing rain, hail and the risk of tornadoes that could move into the Joplin area this evening,” said Doug Cramer, a meteorologist with the National Weather Service. “This is a very good set up for very big tornadoes.”

The National Weather Service said the tornado that struck the city Sunday evening had reached wind speeds of up to 198 miles per hour, just below the 201-mile-an-hour wind speed level of the most powerful category of tornadoes.

On Tuesday morning, American flags flew outside many houses in Joplin, including flags that had been draped over sections of ruined homes. When there was not enough structure of a house left behind to support a flag, flags were placed in nearby trees that had somehow managed to retain a few branches.

About one-third of the most heavily damaged sections of the city were cordoned off by the authorities on Tuesday as rescue teams with dogs combed rubble. The doors of houses that had been searched were marked with an “X.” If bodies were found inside, a number was listed under the “X.”

The authorities said they planned to complete a second sweep through the city on Tuesday, methodically examining every structure that had been damaged — at least 2,000.

On Monday, crews pulled seven people out of buildings that had collapsed, officials said. But on Tuesday, some 60 hours after the tornado struck, no survivors had been found.

Mr. Stammer said the city planned on conducting at least two more rounds of searches, but those would likely not take place until after the storm expected Tuesday evening had passed.

Earlier Tuesday, President Obama, who is on a state trip in Britain, said that he was monitoring the federal response to the tornado and that he planned to visit Missouri on Sunday “to talk with folks who’ve been affected, to talk to local officials about our response effort and hopefully to pray with folks and give them whatever assurance and comfort I can that the entire country is going to be behind them.”

Among the buildings that search and rescue teams were focusing on Tuesday was Hampshire Terrace, a 100-unit apartment complex with about 300 tenants, where the tornado’s fierce winds had ripped off and blown away nearly the entire second story of the two-floor building.

Jessica Blackwood, 22, who had lived in Hampshire Terrace with her 2-year-old son, was not at home when the tornado hit. Her grandmother, who lived in another unit in the complex was also not home and escaped harm. But Ms. Blackwood said she is very worried about her neighbors.

“I keep hearing the count go up and I keep praying it stops,” she said. “I’m so scared one of these times I’m going to hear a name a know.”

“It’s absolutely gone. It’s a total loss,” said Rick Plush, president of the building’s management agency, the Heritage Management Corporation, based in Topeka, Kan. “You want to be optimistic, but when you see the level of devastation, you wonder if there aren’t parts of people in the rubble. We are as optimistic as we can be.”

Most of the building’s residents were low- or moderate-income families, including elderly people and families with children, said Amy Thompson, vice president of Heritage Management. About 20 percent of the tenants received federal Section 8 housing vouchers.

The company said that it had set up a special Web site and that it had established a special phone number for tenants to call, but that the whereabouts of only seven or eight tenants had been determined so far.

“When something like this happens, people scatter and I think most people are still in survival mode – making sure they have food and a place to live,” Ms. Thompson said. “Hopefully within three or four days, we’ll have heard from a lot more people.”